Robin White: Something is Happening Here is the first book to be devoted to Robin White’s art in 40 years.

Here, the authors reflect on working with Robin for the book and accompanying exhibition.

Dr Sarah Farrar is a curator and writer based in Tāmaki Makaurau Auckland. She is currently the head of the curatorial department at Auckland Art Gallery Toi o Tāmaki where she is responsible for the curatorial, research library and archives, learning, and public programmes teams.

Dr Nina Tonga is Curator Contemporary Art at the Museum of New Zealand Te Papa Tongarewa. Nina has been involved in a number of writing and curatorial projects in New Zealand and the wider Pacific and was Curator of the Honolulu Biennial 2019.

Jill Trevelyan is a Wellington art historian and curator. She is the editor of Rita Angus: An Artist’s Life (Te Papa Press, 2021), Toss Woollaston: A Life in Letters (Te Papa Press, 2004). Her biography of Peter McLeavey won the Book of the Year award at the 2014 New Zealand Post Book Awards. 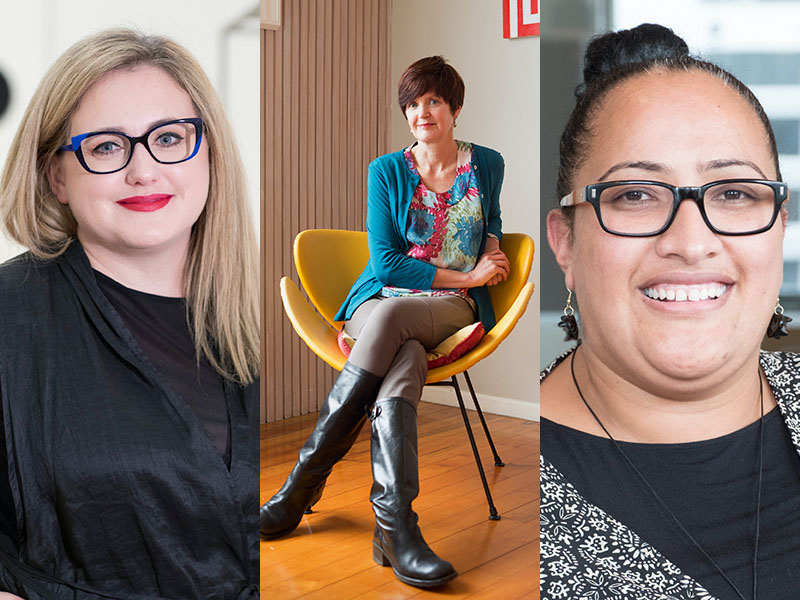 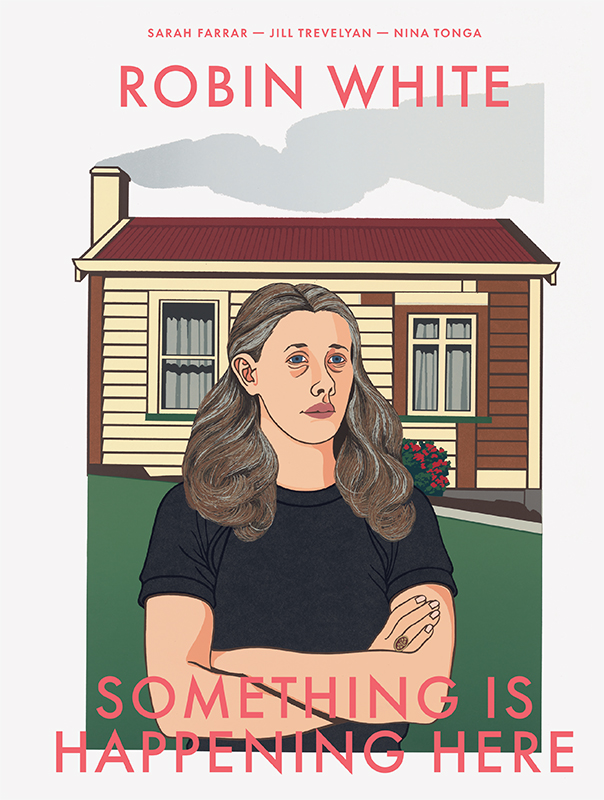 Ten questions with the authors

When did the idea for a major survey exhibition plus a book about Robin White first surface?

SF: Robin recently sent me a photo of one of her notebooks from 2013, or thereabouts, which records a meeting we had at Te Papa and first discussed the idea of a retrospective and publication. I was working at Te Papa at the time and had been doing research into her works in the collection. When I subsequently learned that Jill was interested in working on a book about Robin White’s life and work, it made sense to collaborate, and we started working together in earnest around 2016. As things progressed, Nina also joined our conversations.

NT: The idea for this project started with my co-editors Jill and Sarah. When I started at Te Papa in 2014, Sarah introduced me to Robin for the first time but I believe their research was well underway at that point.

Why did you think it was something whose time had come?

SF: There had not been a significant publication on Robin White’s work since 1981 and the last survey of her work, curated by Linda Tyler, was in 2002-05. In the 20 years since, she has created some of her most ambitious and interesting works, often made in collaboration with artists in Aotearoa and the Pacific.

NT: Given her prolific career a publication and exhibition of this scale feels very overdue.

At the time the project commenced, how familiar were each of you with her career and her body of work?

SF: My mother and stepfather had a couple of Robin White’s screenprints, featuring her young son Michael, so I feel as though I’ve grown up with her work. Since then, I’ve followed Robin White’s work with interest over the past 20 years of my working life, but I have been seriously researching her work since about 2012.

NT: When I joined the project the strength of my knowledge was of her more recent collaborations with artists in Kiribati, Fiji, and Tonga. Although, I have very fond memories of seeing the print of her Tongan neighbours Mere and Siulolovao (1978) in my university art history classes.

Does it feel privileged to have a rich understanding of it three years on?

SF: Yes. I have thoroughly enjoyed the many hours spent with Robin, Jill, and Nina over several years now discussing Robin’s life and her work.

NT: During this time I have had the privilege of travelling and researching with Robin to Fiji in 2019 and last year we travelled with her to Dunedin. Travelling with her, meeting artists she has collaborated with, neighbours, and friends, some of whom have appeared in her works has enriched my understanding of the artist and her practice. There is a really great quote from Robin in a 1977 issue of Art New Zealand where she states “my work arises out of the situations I’m in”. I think I have a deeper understanding and appreciation of this quote now.

What adjectives would you each use to describe the many and distinct stages of her career and shifts in her practice?

What adjectives would you use to describe Robin herself?

NT: The same as above.

What’s one new thing you each learned about her?

NT: Robin is a great record keeper! She keeps a notebook for each of her projects filled with tests prints, sketches and drawings ,and newspaper clippings. When she was in Fiji working on That Vase she brought old notebooks from previous projects in case something jumped forward into her new work.

SF: Soon, the tide will turn (2021), made in collaboration with Ebonie Fifita, is a current favourite.

NT: Mere and Siulolovao (1978) has always been a personal favourite.

SF: I like to think that this is still ahead of Robin. She’s making some of the strongest and most ambitious works of her career at the moment.

NT: Her best work is always ahead of her, it’s one of the things I admire about Robin.

What do you hope visitors to the exhibition will discover and that readers will take away from this book?

SF: I hope that visitors and readers will gain insight into Robin’s deeply relational practice; relationships with people and whenua are at the heart of her life and work. As she noted in 2014, “A consistent thread in my work is that it’s made in response to place, and what’s happening around me – physical and social environments provide the raw material, the inspiration, the starting point.”

NT: I hope they will gain deeper understanding of Robin as an artist and an appreciation for the volume of works she has and continues to produce. As a take away for our visitors and readers, I hope that they feel that Robin’s works (past and present) affirms their unique sense of place in Aotearoa and the Pacific.