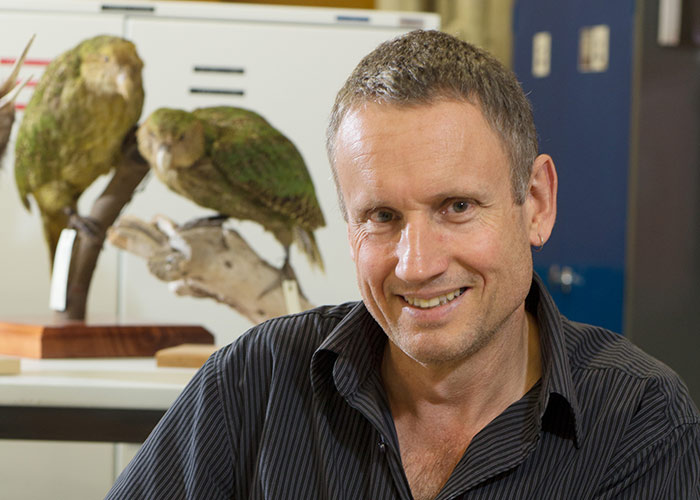 Dr Colin Miskelly is an ornithologist with broad interests, including conservation ecology, biogeography, and the history of science. Employed as a curator of vertebrates at Te Papa since 2010, Colin previously worked for the New Zealand Department of Conservation as a scientist and manager. His research on snipe and seabirds first took him to the subantarctic region in 1982, and has led to an ongoing interest in these remote islands and their spectacular wildlife.

Ten Questions with the Editors

This is a special edition of the Birds New Zealand (the modern name for the Ornithological Society of New Zealand) journal Notornis, and as such it is the first book or other publication focused on the birds of the Auckland Islands. When did Birds New Zealand decide that there was a need for this book, and why?

CM: The need for a comprehensive account on the birds of the Auckland Islands was first commented on in the 1955 book New Zealand Birds by W.R.B. Oliver. The leader of the wartime coastwatcher scientific programme (and later Director of the Dominion Museum) Sir Robert Falla intended to produce such an account, and he and Brian Bell of the Wildlife Service agreed to collaborate on a comprehensive account soon after the major 1972–73 expedition led by Bell. Falla died in 1979, and Bell apparently did not progress this before his own death in 2016. Falla’s obituary noted his regret that the work had not been completed. Other ornithologists who had visited the Auckland Islands deferred to Falla and then Bell to produce the definitive account on the birds of the Auckland Islands. I became aware of this when arranging a permit to visit the islands in 1985. Following my participation in an extensive survey of smaller islands in the group in January 2018, I volunteered to lead the preparation of a special issue of Notornis focused on the birds of the Auckland Islands. This was supported by Birds New Zealand Council and the editor of Notornis. The timing of the special issue is specifically intended to provide a summary of the current status of the birds of the Auckland Islands before the planned eradication of feral cats, pigs and mice is commenced (and hopefully completed!) by the Department of Conservation.

An impressive number of contributors have been brought together. Was their response enthusiastic from the get-go?

CM: All the researchers currently involved in Auckland Islands bird research programmes were very enthusiastic about the book concept, and quickly volunteered and delivered contributions, to the extent that the book ended up being about 50 per cent larger than originally expected.

How special is the bird population of these islands?

CM: The Auckland Islands are the largest and biologically richest island group south of New Zealand, with eight endemic bird species or subspecies (i.e. birds that are confined to the Auckland Islands). This, combined with their abundant seabird populations (including several albatross and penguin species) makes them a mecca for bird-watchers.

Are predator control initiatives making a real difference, or does much more need to be done?

CM & CS: Feral cattle, rabbits and mice were eradicated from Enderby Island in 1993. One of the chapters in the book documents the spectacular recovery of ground birds, particularly the endemic snipe, teal and dotterel, and also surface-nesting northern giants petrels, that has occurred since browsing mammals were removed. Two other chapters describe the devastating and ongoing impact that feral cats and pigs have had on the birds on the main Auckland Island. The Department of Conservation is planning to eradicate pigs, cats, and mice from Auckland Island, and this book provides a timely benchmark against which to measure future changes in the bird populations.

It must be a privilege to get there.

CM: While a few ecotourism operators are permitted to land on two islands in the Auckland Island group, it is a tremendous privilege to visit the least modified islands in the group, or to stay overnight on any of the islands. Only nine naturalists have stayed overnight on Disappointment Island (the least-modified island), and six of them have contributed to this book.

But not easy one assumes.

CM: Access to the Auckland Islands is difficult to arrange, both gaining permission and finding transport. Many researchers have hitched lifts on ecotourism vessels, and partly for this reason, nearly all visits since the Second World War have been during the summer months.

What is the lure of these islands to ornithologists?

CM: The Auckland Islands have a rich human history, including attempted settlement by Māori and British, remarkable shipwreck survival stories, and wartime coastwatchers. When combined with spectacular landscapes, some of the most gorgeous flowering plants in New Zealand, unwary albatrosses, rare penguins and a variety of endemic birds (including snipe, flightless teal, tomtit and banded dotterel), the Auckland Islands are on the bucket-list for birders from around the globe.

Could you outline some of the surprising or significant research findings contained in this volume?

CS: The comprehensive nature of the issue in itself is a feat, including extensive use of previously unpublished bird records collected by Second World War coastwatchers. Chapters that stand out are those on the movements of white-headed petrels; use of modern genetic techniques and aerial photography in bird conservation; Colin Miskelly and Joanne Cooper’s chapter that adds a new species to the New Zealand bird list; and a summary of mammal impacts, including stunning recent images of feral cats eating an albatross and a parakeet.

Do you have a favourite Auckland Island bird species?

CS: I always have a soft spot for parrots – so for me it’s the parakeets.

CM: The Auckland Island rail was the bird I was most excited to see. It is unrelated to any other New Zealand bird, is found on only two islands that few people get a chance to visit, and even on those islands it stays hidden among the densest vegetation, and so very few people have ever seen it. But as I have been a snipe researcher since 1982, and since they are a group with rich and varied conservation and cultural histories, I would have to rate the endemic Auckland Island snipe as my favourite.

Finally, can you tell us about Birds New Zealand and the journal Notornis?

CS: The Ornithological Society of New Zealand (OSNZ) was established in 1940 and its journal (renamed as Notornis in 1950) was first published in 1943. Three of the foundation members (Robert Falla, Charles Fleming, and Graham Turbott) each spent a year on the Auckland Islands as Second World War coastwatchers between 1942 and 1944. Notornis is published quarterly and remains the only scientific journal dedicated to the birds of New Zealand and the south-west Pacific. It is the main source of information published on New Zealand birds over the past 80 years. OSNZ adopted the brand name ‘Birds New Zealand’ in 2013.