Damian Skinner is an art historian, writer and curator. He is interested in the history of cultural contact between Māori and Pākehā, and the relationship between art and politics in Aotearoa New Zealand. He has written numerous books, including The Carver and the Artist: Māori Art in the Twentieth Century (2008) and The Passing World, The Passage of Life: John Hovell and the Art of Kōwhaiwhai (2010), which won the New Zealand Post Book Award for Illustrated Non-fiction in 2011. 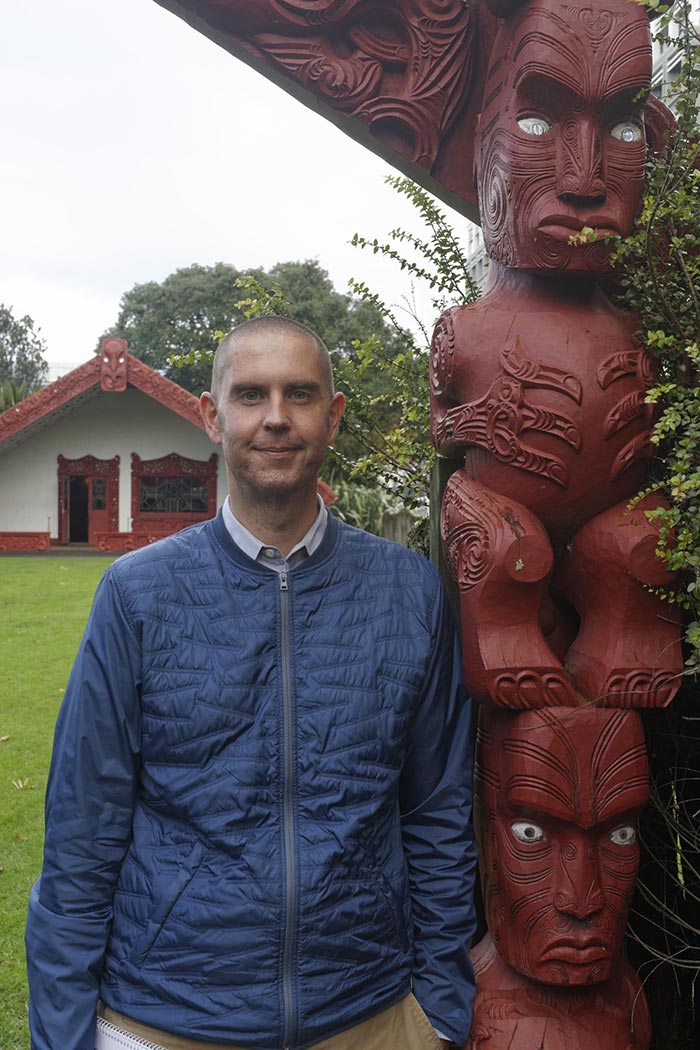 How would you describe a whare whakairo?

A whare whakairo is a meeting house that is adorned with the arts of whakairo rākaurākau carving, tukutukutukutuku weaving and kōwhaiwhaikōwhaiwhai painting. Hirini Moko Mead says that ‘Whakairo is quality, the difference between crudity and elegance, animal and human, nature as opposed to culture. Whakairo represents the triumph of mana Māorimana Māori power over the environment and represents a gift from the ancestors to their descendants born and yet unborn.’ So a whare whakairo is a wharewhare house transformed by whakairo, a word that means design or pattern, as well as to ornament with a design or pattern.

Whare whakairo contain layers of history and meaning, and are hugely significant for Māori. Are they something all New Zealanders should know more about?

I think so. Whare whakairo are an assertion of Māori pride and identity, a way of declaring that Māori have flourished in a world now dominated by Pākehā values. Whare whakairo are extraordinarily adaptable, responding to the different needs of the communities who make and belong to them, so they embody history. They are also extraordinary artistic statements. And they tell a story about Māori and Pākehā interacting over the past two centuries. Whare whakairo have meanings and histories that are specific to Māori, but they also speak to Pākehā. I think a lot would change in this country if Pākehā learned more about Māori, and the whare whakairo is a great place for this learning – for this encounter – to happen.

I didn’t know very much about tukutuku when I started out, and the story of how it began as part of the wall and then, over time, took on a separate identity as woven panels was new to me. And I guess the sheer weight of artistic innovation that becomes visible when you track the history of the whare whakairo was a surprise. I knew there was a great art history to be told, but I’m more in awe of this achievement now.

Do you have a favourite photograph from the book, and why?

It’s not a photograph, but a photographic spread. I like the composite image on pages 178–179 of the poupoupoupou carvings and hekeheke rafters in the meeting house Tāne-nui-a-Rangi – the way the somewhat crazy collage of individual photos shows how your eye moves up and across the roof and down to the other side. Every time I see it, I am reminded how active the experience of looking at a whare whakairo actually is. It involves your whole body.

Is there one particular whare that made a strong impression on you when researching the book?

In some ways the book is really an appreciation of Tāne-nui-a-Rangi, the whare whakairo at Auckland University’s Waipapa Marae. I’ve written about him before, but I never felt satisfied by what I had managed to achieve. Thinking about the history of the whare whakairo, and the challenges of doing art history with taonga that are more than artworks in a western sense, led me to find a new way to write about Tāne-nui-a-Rangi. This book gets much closer to doing justice to who and what this whare whakairo is, and also to what I feel as a Pākehā art historian having the privilege and responsibility to tackle such subjects.

There’s nothing more exciting than coming across a bit of evidence that you hoped would be in the archives, and which proves your point. But research can also be a boring and unrewarding task – hours of wading through dusty books and mouldy bits of paper, or getting seasick from the microfilm machine. At least when you are writing there’s evidence that you’ve actually been doing something, and even if it isn’t very good, you know it’s nothing that a good editor can’t fix.

You have mentioned that it is difficult talking about Māori art and culture as a Pākehā. Is there a place for Pākehā in conversations about these subjects?

At different times I have had different answers to this question. I guess by writing a book about whare whakairo I am saying that there is a place for Pākehā, but it is really tricky. I see this book as a guide for anyone who would like to know more about the Māori meeting house. It deals with the history of the whare whakairo, and the art forms that make these taonga distinctive, but it also talks about the differences between taonga and art works, and the challenges of Pākehā writing about Māori art against a backdrop of injustices between Māori and Pākehā, which are still playing out today. I’m trying to take responsibility for educating Pākehā, and in this case, making it a little bit harder for Pākehā art historians to avoid the implications of Māori art and cross-cultural histories on the stories of art in Aotearoa. I also want to make information available to people who’d like to know more but aren’t sure who to ask or how to find out. And I do think that Pākehā have to take some responsibility for educating other Pākehā, rather than waiting around for Māori to do it. But I’m still claiming authority to represent things that don’t belong to me, and no matter how carefully you try and navigate that, it’s going to be offensive to some people.

What is your most productive time for writing, and where do you write best?

It’s most wonderful when you know you have a whole day to write, without any responsibilities or appointments interrupting your flow. I get my best work done in bed – it’s basically where I’ve written everything since my PhD thesis.

It is surprising to see there are a number of significant Māori whare overseas. How did this come about?

People and objects travel, and even taonga as large and complex as whare whakairo end up outside Aotearoa. There was a large trade in what was called ‘curios’ in the nineteenth century, and most of these meeting houses travelled courtesy of European interest in Māori art and culture. Ruatepūpuke II from Tokomaru Bay went to England, then Germany, and finally ended up at the Field Museum in Chicago in 1905. Hinemihi from Te Wairoa in the Rotorua region was purchased by Governor-General Onslow, who was looking for a whare whakairo as a souvenir of his time in Aotearoa, and now sits in the garden of Clanden Park in Surrey. Rauru from Whakarewarewa in Rotorua was commissioned by a Pākehā for the local tourist circuit, and then sold to the Museum of Ethnology in Hamburg. The newest whare whakairo to head overseas was Te Aroha o te Iwi Māori, who was made for the Polynesian Cultural Centre, a Mormon tourist attraction in Hawai‘i, which opened in the 1960s.

Recently I decided I would get all my fun reading from the Hospice second-hand shop. Currently my stack includes The Stepford Wives, Tales from King Arthur, Fitness After Forty, Container Gardening for Glorious Results and Selected Stories of Sherlock Holmes.