Mike White, who has written the introduction to Dogs in early New Zealand photographs, discusses the book with Te Papa Press. 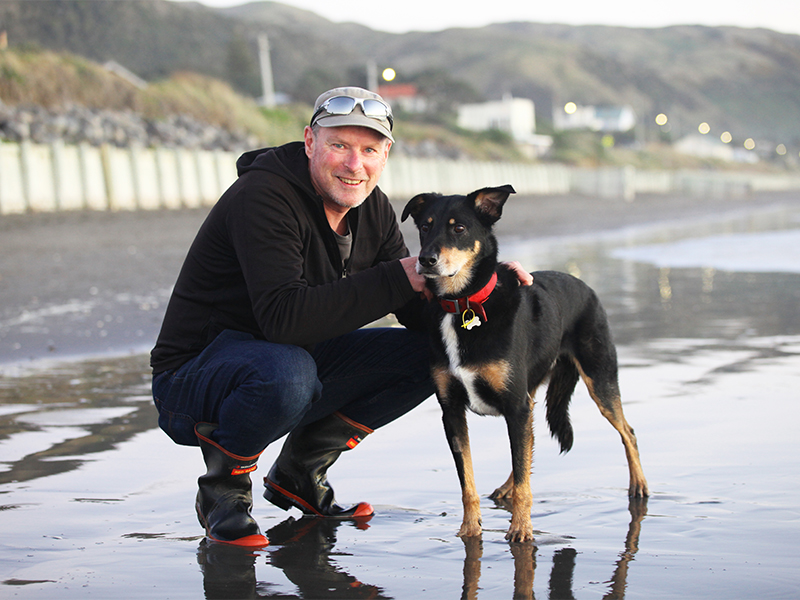 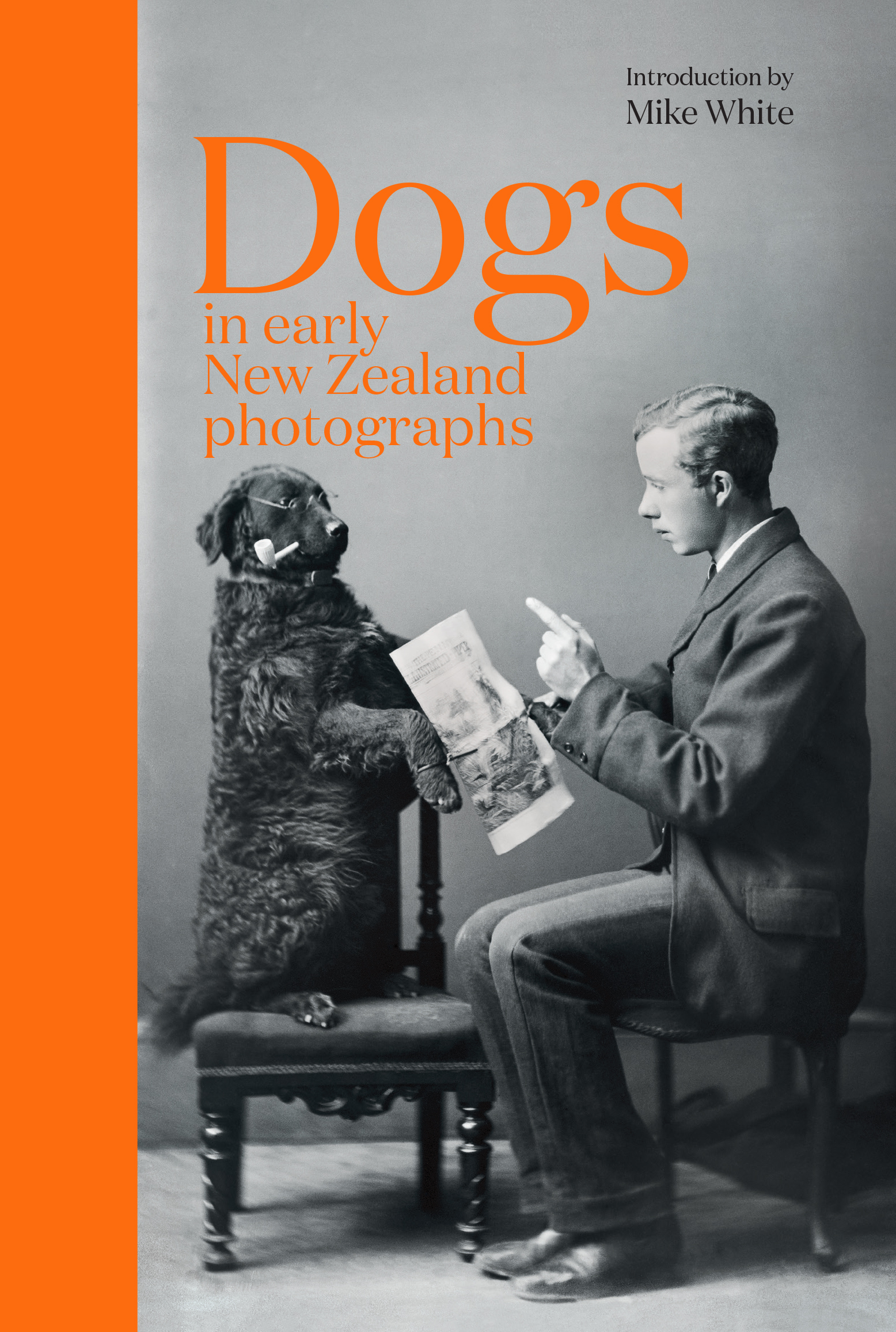 Mike White is one of New Zealand’s best-known investigative journalists and is a life-long dog lover. For many years an award-winning senior writer at North & South, he is now a senior writer at Stuff. His previous books are How to Walk a Dog (Allen & Unwin, 2019), about life in and around a dog park, and Who Killed Scott Guy? (Allen & Unwin, 2015).

What struck you when you first saw the photographs that were being selected for this book?

How remarkable it was that people included their dogs in these photos – at a time when having your photo taken was a rarity and a real event, with best suits and big hats. But I shouldn’t have been surprised – of course dogs were crucial family members and companions 100 or 150 years ago, as they have been for millennia.

There are backstories to some of the dogs. Which moved you the most?

Without doubt, the story of the Samoyed, Erebus, born in Antarctica on one of Ernest Shackleton’s explorations, brought back to New Zealand at the end of the expedition, and given to Beatrice Curlett of Christchurch by the crewman in charge of the dogs, Ernest Joyce. Eight years later, Joyce is back in New Zealand after another Shackleton expedition, spots Erebus out for a walk, calls him, and thus meets Beatrice again. A year later Beatrice and Ernest Joyce are married. Too fantastic.

Joyce’s story in itself is remarkable – one of the true pioneers and heroes of Antarctic exploration.

And it’s worth noting how lucky Erebus was to survive and be brought back to New Zealand – many dogs on later expeditions were simply shot or left on the ice.

The book would have taught you quite a bit about our early photographic history, one assumes?

Absolutely. I had no idea photo studios operated across New Zealand so soon after the invention of photography. Photography is so easy now, we take it for granted. We’ve just got to be so grateful that some people set themselves up as photographers in those early years, and thus a record of the time was preserved.

You write about how hard it is to take a good photo of a dog. Are you impressed at how these early photographers managed?

Oh, good god yes. I think, in the age of digital photography, where you can take any number of photos to get the perfect one, we forget how hard it was for these photographers to get it right first time. Taking photos was expensive, so you couldn’t afford to take a bunch of shots with different exposures, or to cover yourself in case someone blinked. The exposures were very long, and there was every chance a dog or human would move and blur the picture. So the skill in getting a good shot with human subjects, who you could instruct, was huge. Add in a dog, and most of the results here are genius.

If you and your dog Cooper had been around in the late-nineteenth and early twentieth century, how do you think he would have behaved in a portrait photographer’s studio?

Hopelessly. Almost certainly atrociously. He would have been bemused, impatient, uncooperative, and a difficult subject, to say the least. And in the photos, he would have looked mournful like he was having the worst time of his life. The only solution would have been a pocketful of treats to bribe fleeting good behaviour from him.

The one I kept coming back to was the photo of Cyril McCusker, in his army uniform. It’s taken in a place I used to walk my dog when I was a teenager; and has the added poignancy of impending war. And it’s beautifully shot, by Cyril’s father.

There are so many, so one more?

As far as the studio shots go, the one I’ve always been most intrigued by is one from the William James Harding Studio, of an unidentified man and his dog, taken some time between 1870 and 1890. It’s the only studio photo where the human subject isn’t looking at the camera – here he’s got his head (with splendid hat) down, looking at his dog. His right hand is slightly blurred, and I tell myself it’s because he’s giving his dog a scratch around his neck. It’s just a more natural, gentle photo, where the man doesn’t intend to be the focus of the photo.

What’s one new thing you learned while working on this book?

Just some amazing stories, vignettes of life in New Zealand in the years the photos span. And several tremendous Antarctic tales, which I’m always a complete sucker for.

But also, just how widespread photo studios were in New Zealand in the late 19th century and early 20th century. For many years, I worked in photo shops, developing and printing photos, and I’m just astounded by the results these studios got, with basic and cumbersome technology.

What do you think readers might most enjoy about it?

I think anyone who’s had a dog will just love being able to see the obvious close relationship between the humans and the dogs in these photos, and be able to relate to that. If you’ve never been lucky enough to have a dog, or spend time with a good one, then I think you’ll just love the way each photo tells a small story, and fits within the broader history of this period of our country. It’s a small window into that time, and parts of our society, with the charm of dogs being the frame.

What do you think the story is behind the mysterious suitcase-carrying dog?

I’ve spent ages poring over this photo and blowing it up to try to discover clues – all pretty fruitlessly. In my imagination, the rather splendid shiny spaniel is trotting after a master who’s forgotten his work case, and probably his lunch. In reality, I’d guess the case perhaps belonged to a schoolchild, given the lettering, and the dog has been set up by the photographer to carry it - and that may explain why the handle seems to be taped up. The photo seems too perfectly focused and framed to be a random shot. But neither of these theories will be accurate, and I’d dearly love to know the truth.