Holding on to Home: New Zealand Stories and Objects of the First World War 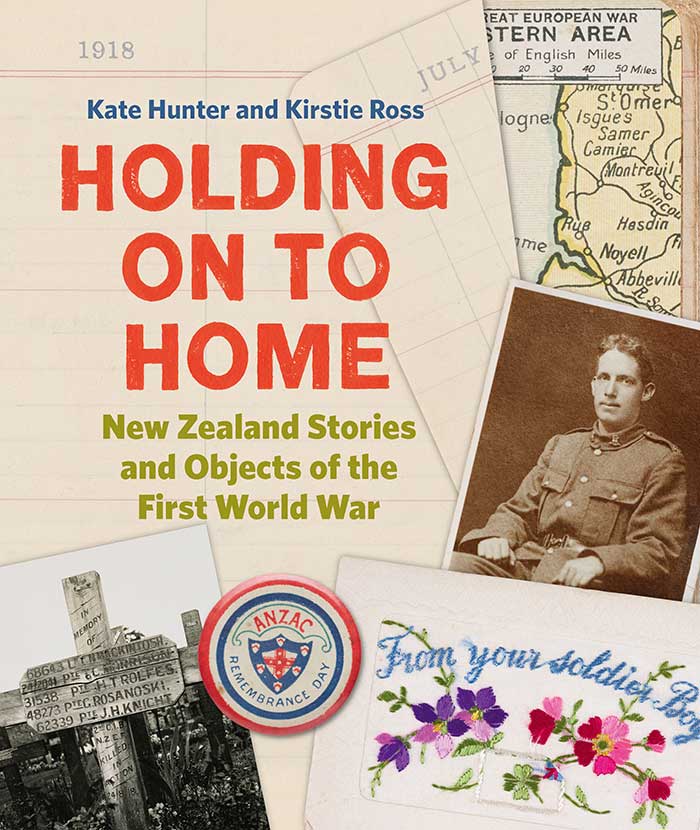 The Great War seeped and stormed into every aspect of New Zealanders’ lives, from the frontline to the family home.

The things that survived – a crumpled theatre ticket, an engraved cigarette case, a knitting pattern, a crucifix made from rifle cartridges – are emotional touchstones that bring this distant event back into our hands.

Historians Kate Hunter and Kirstie Ross have scoured museums and archives across the country to uncover these personal possessions and the stories they tell. All-new photographs and original research illuminate the things that were worn, lugged, kissed and held by soldiers and those at home, placing these objects at the centre of this important new social history.

Holding on to Home provides a fresh perspective on the First World War and gives valuable insights into the lives of New Zealanders during wartime, more than one hundred years later.

Kate Hunter is a social historian of Australia and New Zealand with an interest in World War One. As Associate Professor and Head of the History Programme at Victoria University of Wellington, she researches and teaches on gender, family and race relations in the 19th and early 20th centuries, including the social and cultural histories of the Great War. She is an Honorary Research Associate at the Museum of New Zealand Te Papa Tongarewa and the author of many articles and books, including Father’s Right-Hand Man: Women on Australia’s Family Farms, 1880s to the 1920s (2004) and Hunting: A New Zealand History (2009).

Kirstie Ross, former Curator Modern New Zealand at the Museum of New Zealand Te Papa Tongarewa, specialises in 20th-century social history and material culture. She has curated numerous exhibitions including Slice of Heaven: 20th Century Aotearoa and Te Papa’s World War One centennial exhibition, and has written popular and scholarly articles and essays on topics ranging from soldier photography to camping and tramping. In 2004 she received a New Zealand History Research Trust Award which resulted in the book Going Bush: New Zealanders and Nature in the Twentieth Century (2008).