A group of Colin McCahon’s most important works are on display in our Toi Art galleries, coinciding with the centenary of the artist’s birth.

Note: The artworks are located throughout Toi Art.

These works celebrate the breadth and ambition of McCahon’s painting, in the years from the 1940s to the 1970s.

Always technically daring, and open to challenging the boundaries of what a painting could be, McCahon famously described art as ‘signs and symbols for people to live by’. Through his work he engaged people with big questions about life, faith, and place.

The work that is on display in Toi Art shows McCahon experimenting with different scale, materials, and subjects. From early religious paintings, that demonstrate his interest in landscape and figurative work, to the abstract paintings of the 1960s and the huge unstretched canvases of the 1970s. 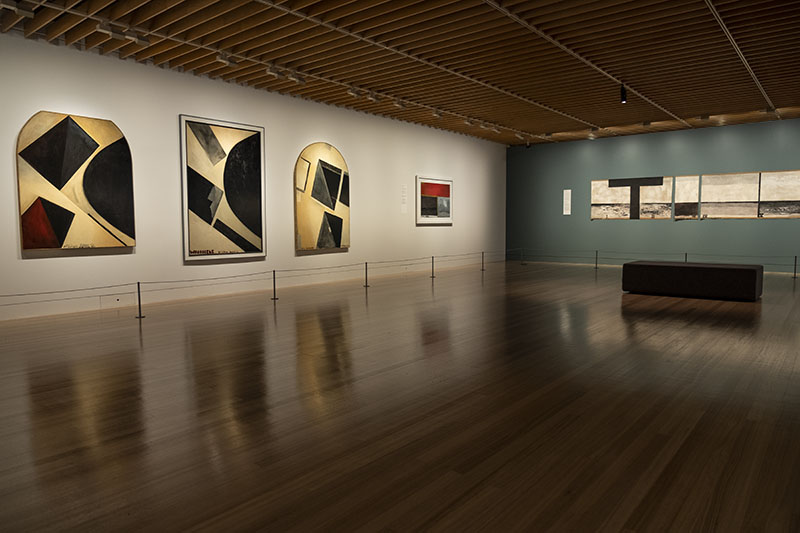 The first group of paintings in this gallery, The Angel of the Annunciation, Christ taken from the Cross, and The King of the Jews, all date from 1947 and depict biblical scenes in a New Zealand landscape. When these works were exhibited at the Wellington Public Library in 1948, they shocked viewers with their flat surfaces, bold black outlines, and use of speech bubbles and text.

The second group of works in the gallery were mostly painted in the 1960s and include Waioneke, Gate: Waioneke, Upper corners off, the second large gate, and Mondrian’s last chrysanthemum. Although these four paintings are abstract, they also respond to the landscape and places in which McCahon lived. These works demonstrate the artist’s reaction to an increasingly urgent nuclear threat of the 1960s and 1970s.

The last work in the gallery, Walk (Series C), depicts Muriwai Beach. This large, multi-part canvas was painted in 1973 in memory of the poet James K. Baxter. The painting engages the viewer physically, encouraging its audience to walk along the length of the work and experience McCahon’s view of the beach. 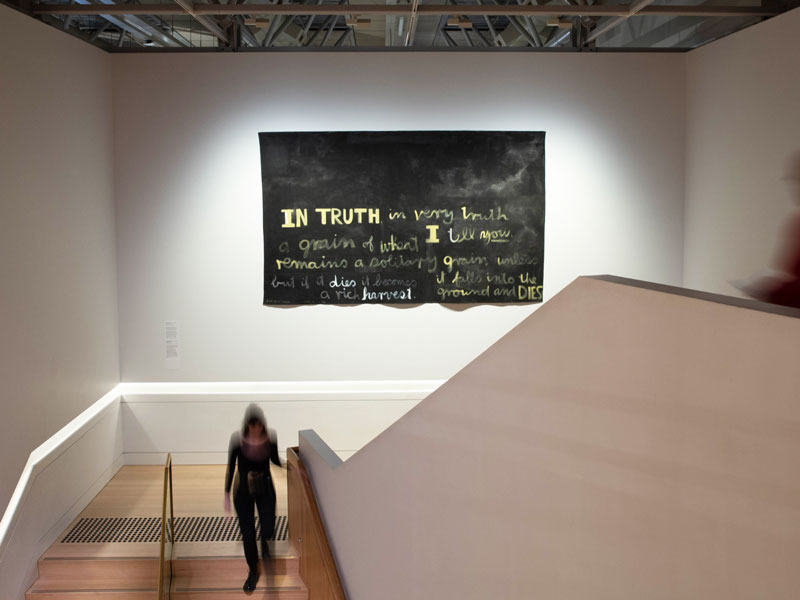 McCahon’s 1970 painting A grain of wheat is on display in the staircase between Level 4 and 5 of the gallery. This is one a number of ‘word’ paintings that McCahon produced in the 1960s and 1970s. There is a powerful immediacy to these canvasses – here he adds meaning, emphasis and cadence to the words through the use of capitals, and in painting light letters over a dark ground. 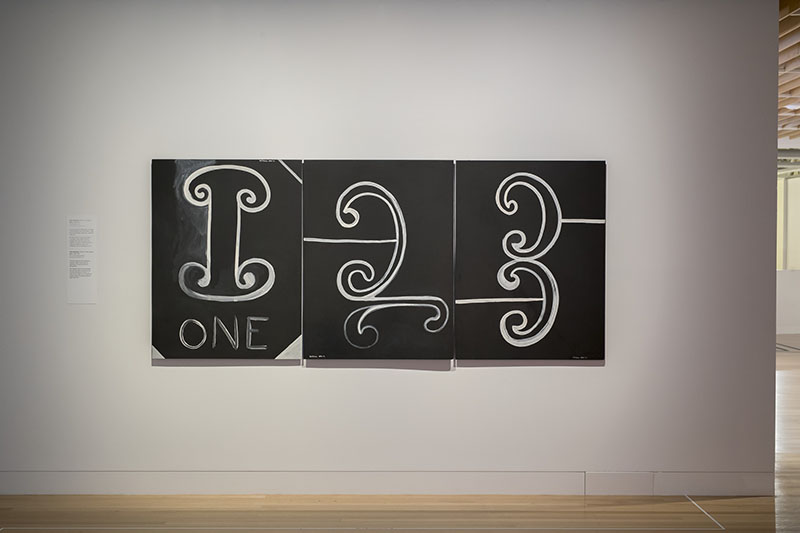 This work connects Colin McCahon’s interest in Māori culture with his exploration of numerals as forms and symbols.

The Christian trinity of God as Father, Son, and Holy Spirit is combined with the frond-like spiral of the koru – a motif found in Māori art. In the last two panels, embryo-like shapes evoke the beginning of life. 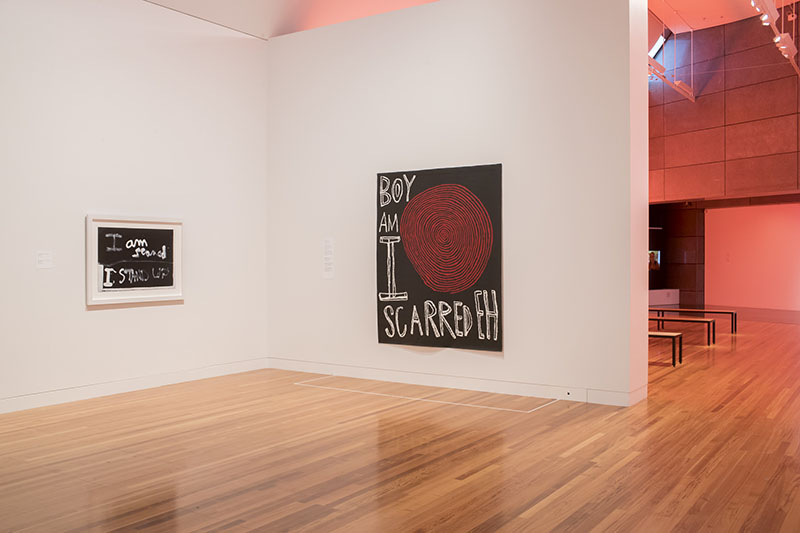 Gallery 3, Tūrangawaewae: Art in New Zealand: I stand up

The scrawled text in this stark, blackboard-like image goes straight to the heart of McCahon’s concerns. A confession of anxiety, expressed in the most direct language, is followed by a resounding declaration of courage and faith.

The words have been brushed on rapidly, spattering dots of white paint and reinforcing the urgency of the message. 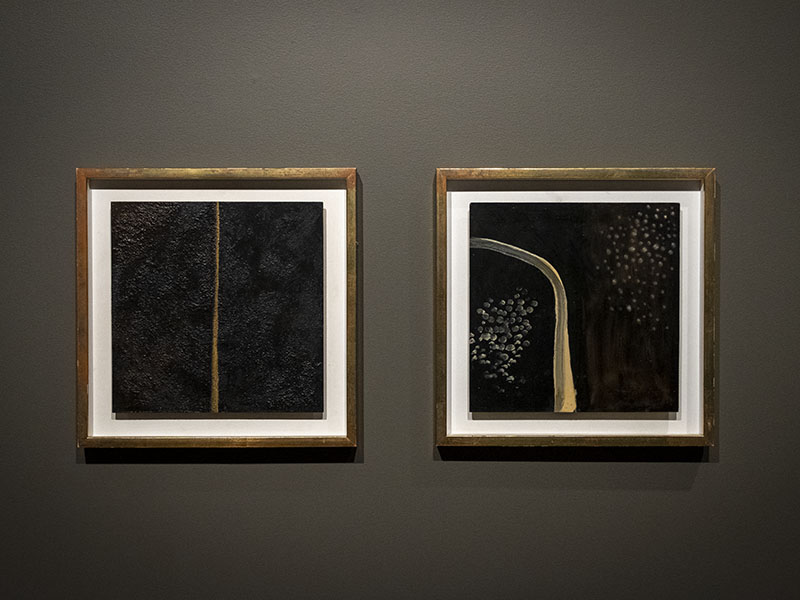 Left: Colin McCahon, Waterfall, about 1964, synthetic polymer paint on board. On loan from Private Collection. Courtesy of the Colin McCahon Research and Publication Trust

Right: Colin McCahon, Waterfall, about 1964, synthetic polymer paint on board. On loan from Private Collection. Courtesy of the Colin McCahon Research and Publication Trust

Two stark paintings by Colin McCahon on loan from a private collection can be seen in Tamatea, an exhibition bringing together Ngāi Tahu whānui taonga and artworks by Mark Adams and Colin McCahon.