Immerse yourself in mātauranga Māori

kōrerotalksMāori | Noun about their practice and much more.

wānangalearningMāori | Noun series across three days. Hailing from different parts of Aotearoa and the Pacific, and working in different fields, they are all connected through their passion for sharing mātauranga Māori.

Join some amazing kaikōrero kaikōrerospeakersMāori | Noun as they discuss their practice in honour of Matariki. 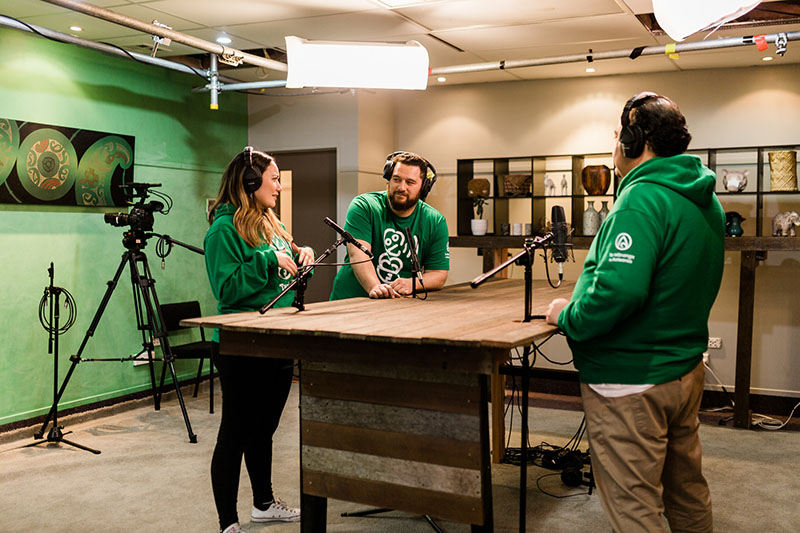 The Taringa team is leaving the bustling metropolis of Te Awamutu to bring you this live special from the cultured capital of Wellington.

The Taringa trio will be joined by some mega manuhiri - Te Mata Punenga, a collective of tohunga handpicked and trained by the renowned Tā Pou Temara and the late Dr Wharehuia Milroy. They will be discussing the launching of Matariki as a public holiday, the underpinning principles of Matariki and the practices associated with mātauranga Māori and whakapono Māori.

Taringa is a podcast about all things Te Ao Māori which has been publishing weekly podcasts for 5 years. Born in Matariki of 2017, the show presents many aspects of Mātauranga Māori in a fun and accessible format, alongside hosts Paraone Gloyne, Te Puaheiri Snowden and Erica Sinclair. 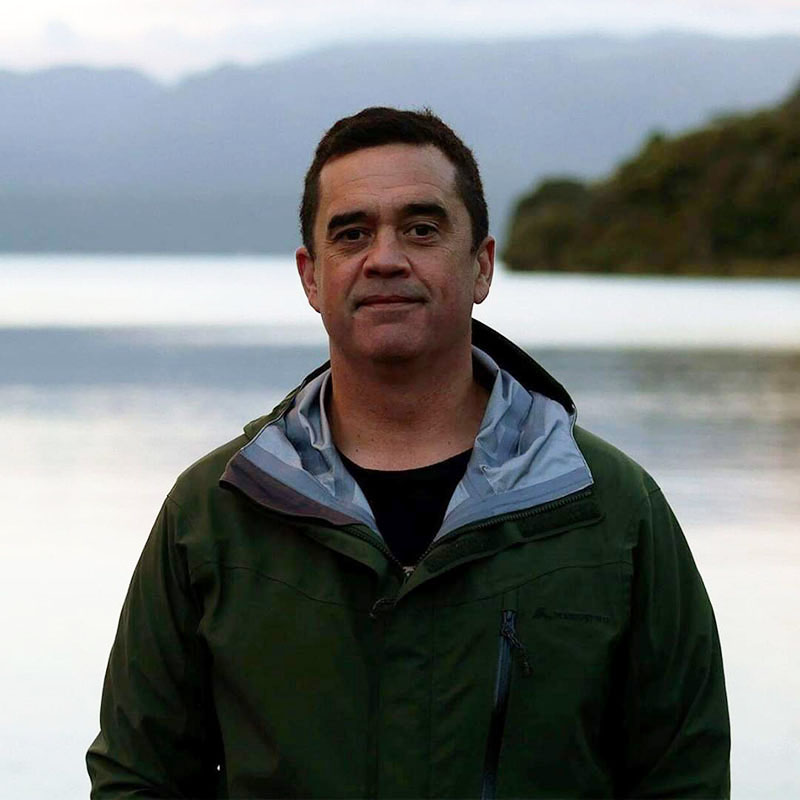 Rangi Matamua. Image courtesy of Living by the Stars

Rangi Matamua (Tūhoe) is Professor of Mātauranga Māori at Massey University and a pioneering Māori scholar who has revolutionised understandings of Māori astronomy, and in particular Matariki. His research has been ground-breaking in terms of its contribution to mātauranga Māori; he has enlightened both national and international populations on the mātauranga of astronomy. He is renowned for his role communicating his research in an accessible and engaging way, and reaching both academic and non-academic audiences. Rangi is both the author of the bestselling book Matariki: The Star of the Year (published both in English and te reo editions) and presenter of the award winning te reo Māori web series Living by the Stars. He has challenged widespread misconceptions about Māori astronomy and has enhanced our understandings of a Māori world view of the stars. His research is situated at the interface between mātauranga Māori and Western science and he is helping to reconnect people with maramataka – the Māori lunar calendar – and the environment. Rangi is also part of a wider movement, reclaiming indigenous astronomy as part of a continued process of decolonisation. He has won the 2019 Prime Minister’s Science Communication Prize and the 2020 Callaghan Medal for science communication from Royal Society Te Apārangi. 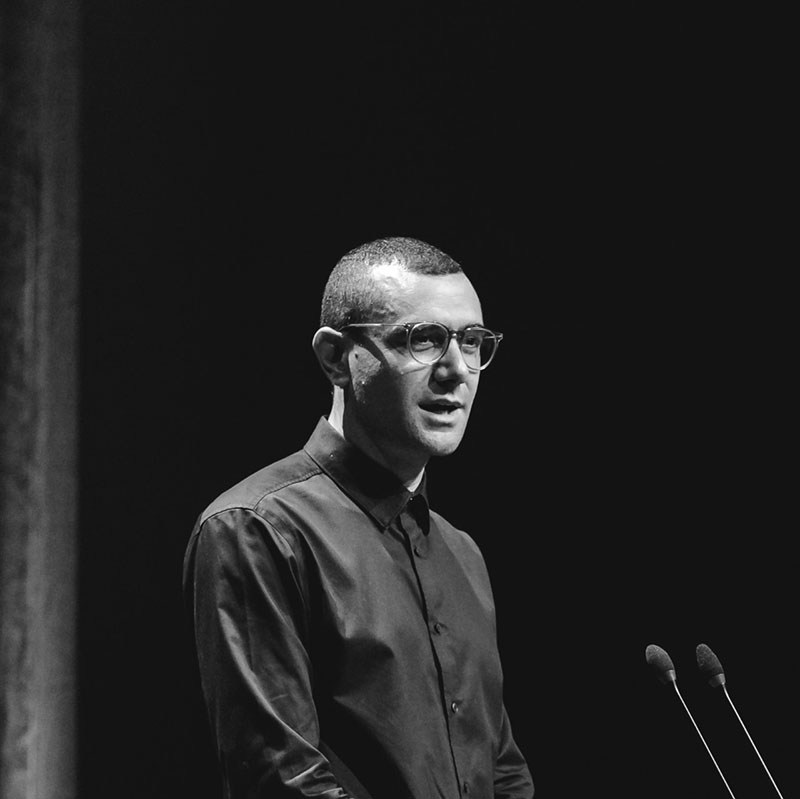 Tyrone Ohia (Ngāti Pūkenga, Ngāi Te Rangi) was born in Tauranga, raised in Whanganui, and is the founder of Extended Whānau – a design studio based in Tāmaki Makaurau. The studio uses design as a platform to elevate indigeneity – particularly Māori culture – to ensure our people, stories and language are reflected in the world around us. Recent projects include a national logo for the Predator Free 2050 movement, the identity for Toi Tū Toi Ora: Contemporary Māori Art at the Auckland Art Gallery, and the identity for the national Matariki public holiday.

Reserve your spot for Rangi Matamua and Tyrone Ohia’s kōrero

We’ll be livestreaming Professor Rangi Matamua and Tyrone Ohia for those who can’t make it to Te Papa.

Immerse yourself in mātauranga Māori with an incredible panel of speakers sharing kōrero about their practice and much more. 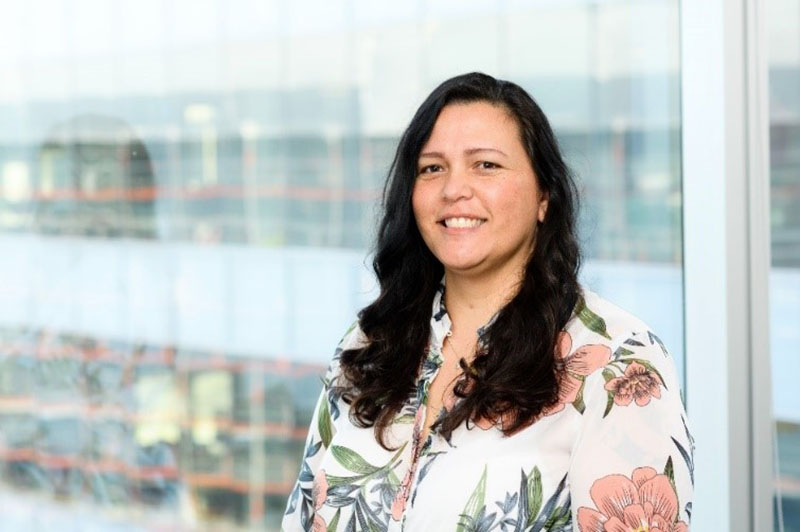 Dr Pauline Harris is from the tribes Rongomaiwahine, Ngāti Rakaipaka, and Ngāti Kahungunu. She is a Senior Lecturer for the Centre for Science and Society at Victoria University of Wellington (VUW). Dr Harris is an astrophysicist who has specialised in high energy neutrino production and inflationary cosmology. Dr Harris’s research currently focuses on mātauranga Māori associated with Māori astronomy, Māori calendars called maramataka, as well as climate change. Currently, Dr Harris is the Chairperson of the Society for Māori Astronomy Research and Traditions (SMART). She is also the Deputy Director Māori for the MacDiarmid Institute for Advanced Materials and Nanotechnology and the Vision Mātauranga Theme Leader for the Science for Technological Innovation National Science Challenge. Dr Harris was part of the Matariki Advisory Committee and advised the government on the establishment of the Matariki public holiday. 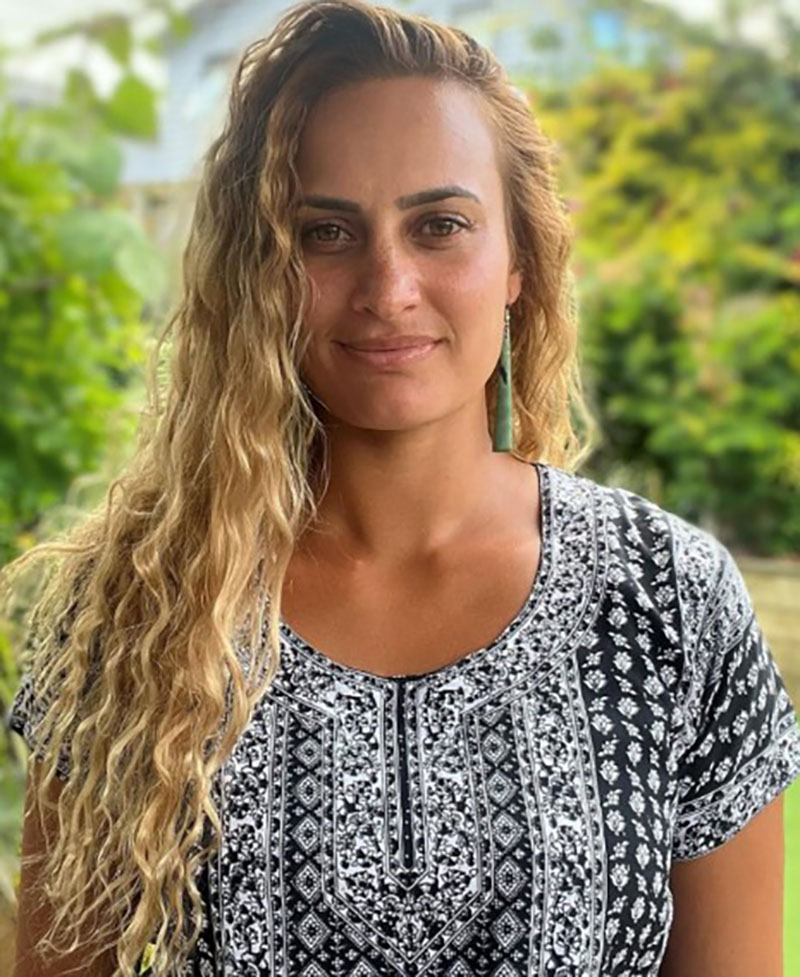 Ayla Hoeta (Waikato Tainui, Ngāti Tahinga, Ngāti Tamaoho) was born and raised in Pukekohe South Auckland, Waikato Tainui and is mana whenua to the region. She is a mum of twin boys, Mikaera and Kaperiera Hoeta. Currently a maramataka practitioner she says her heart mahi is to follow the calling of her tupuna in sharing and reviving practises of mahi maramataka in all aspects of life. Ayla works full-time as a lecturer in the design school in Creative Arts and Industries at the University of Auckland. She also works in other areas of governance supporting organisations to embed maramataka in governance, education, and whānau-led innovation. Ayla has been a maramataka practitioner for many years sharing kōrero through The Spinoff, aligning maramataka knowledge in Tāmaki Makaurau, under the early guidance of Matua Rereata Makiha (maramataka expert). She aims to share knowledge of maramataka, Matariki, and Puanga to highlight the beautiful stories and whakapapa of Aotearoa. 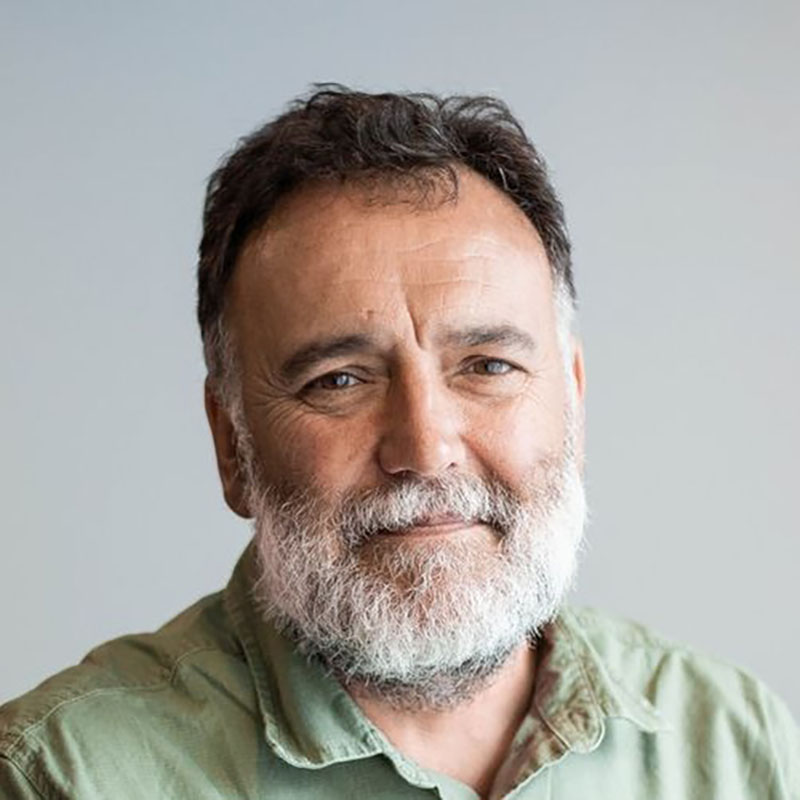 Dr Ruakere Hond (Taranaki, Te Āti Awa) is a longstanding advocate of te reo Māori revitalisation and a key supporter of the Parihaka community. He was instrumental in working to achieve reconciliation between that community and the Crown, and he has held several leadership roles in Māori language organisations, including Te Reo o Taranaki, Te Whare Wānanga o Awanuiārangi, and Te Ataarangi. He has served two terms as a member of Te Taura Whiri i te Reo Māori and is a past board member of Te Mātāwai, which leads the implementation of the Maihi Māori language strategy. In 2013, Dr Hond completed a doctorate in public health, with a focus on Māori language revitalisation, community development approaches, and intergenerationally sustainable health outcomes. He is currently helping lead an Ataarangi approach within the Ministry of Education initiative Te Ahu o Te Reo Māori in Taranaki, Whanganui, and Manawatū, which supports teachers to use reo Māori with students in their education setting.

Reserve your spot for the Panel talk: Astrophysics, the maramataka, and Puanga

We’ll be livestreaming this panel talk on astrophysics, the maramataka, and Puanga for those who can’t make it to Te Papa. 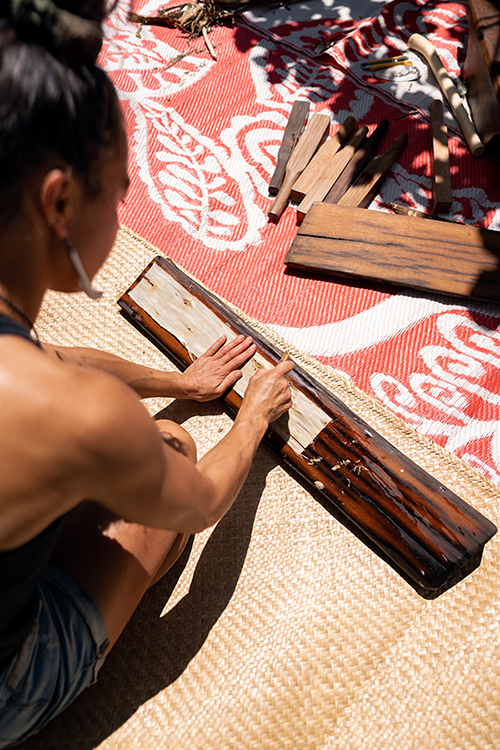 Immerse yourself in mātauranga with an incredible panel of bark cloth makers sharing kōrero about their practice and much more.

Nikau Hindin (Ngai Tūpoto, Te Rarawa, Ngāpuhi) is a bark cloth maker who works with aute (paper mulberry) and natural earth pigments. She is dedicated to reinvigorating the art of aute in Aotearoa. Her work spans the process of making bark cloth, from growing and harvesting, to processing the inner bark, and creating a fine white cloth. Nikau is actively sharing this knowledge with a new generation of makers. Her work is inspired by Māori astronomy and concepts of time and space. 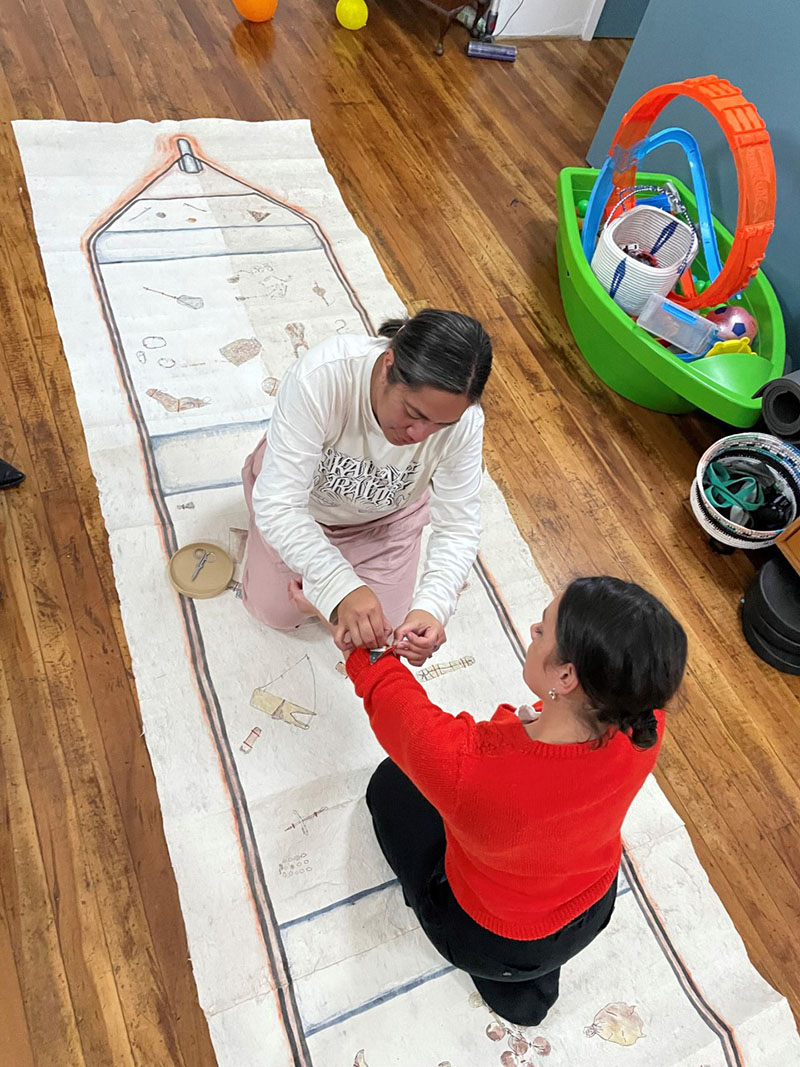 Cora-Allan (Tainui, Ngāpuhi; Niue – Alofi, Liku) is a visual mixed-media artist. She was encouraged by her Niuean grandparents to make hiapo – Niuean bark cloth. Since then, Cora-Allan has helped the Niuean community to connect with this once-dormant art form. She uses the materials of her ancestors such as the bark of ata (paper mulberry), and incorporates kāpia ink made from local sources. Her work has developed incorporating whenua pigments on her hiapo and remains firmly rooted in community. 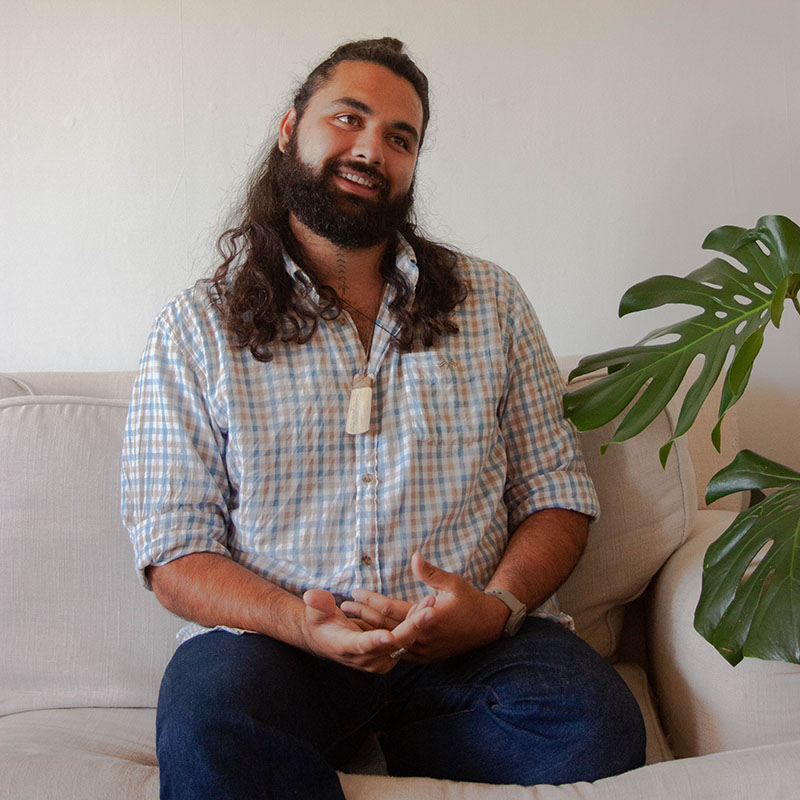 Doron Semu (Sāmoa – Falelatai, Salelesi, Asau, Falelima; New Zealand European) is a maker of siapo (Sāmoan bark cloth), an acupuncturist, and a Master of Nursing Science student. His siapo practice is based on community, connection, and making queer Pasifika joy visible. Doron’s work creates opportunities for the MVPFAFF+ rainbow Pasifika community to have physical space for talanoa (talk) and teu le vā (nurturing relationships). He is the co-creator of Akanuanua, a television series exploring the lived realities of the MVPFAFF+ queer Pasifika community. 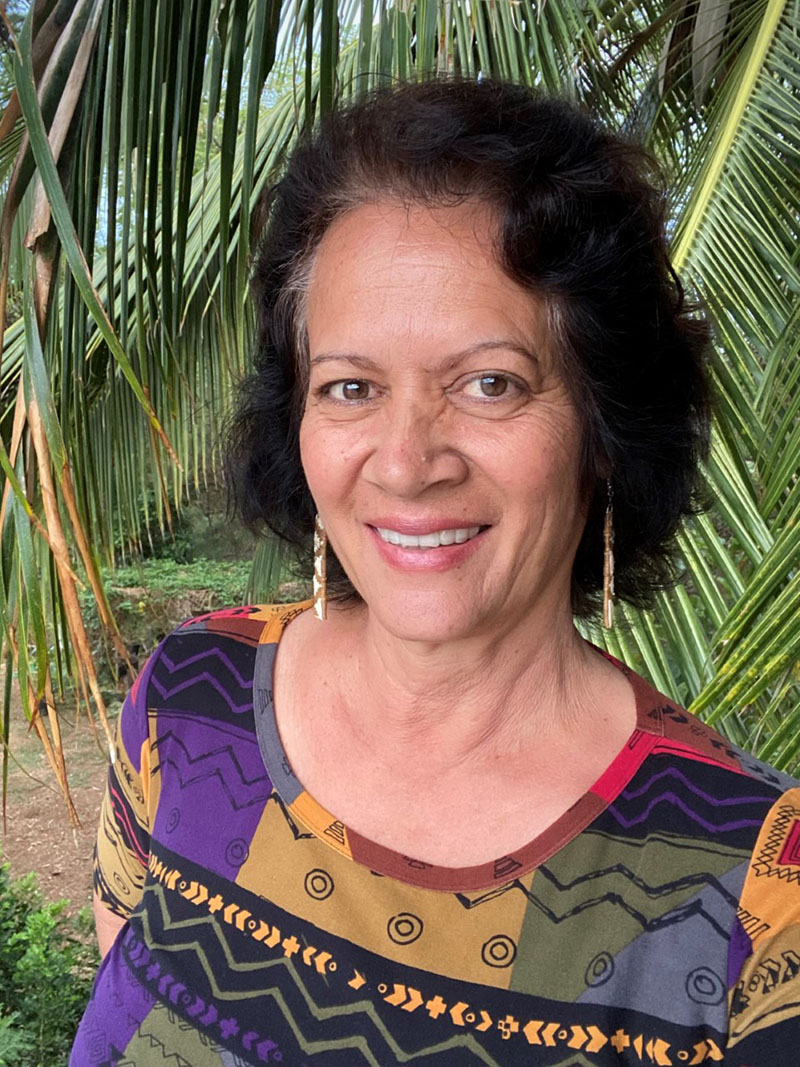 Dalani Tanahy (O’ahu) is an artist and maker of kapa (Hawaiian bark cloth). She is mostly self-taught, and started making kapa when the once-dormant art form was being revived. Dalani is sustained by the process of kapa making – from growing wauke (paper mulberry) and making tools, to producing natural dyes, and beating the inner layer of wauke bark into a soft material. She has taught kapa making for 25 years and continues to create the art form of her ancestors in new ways. 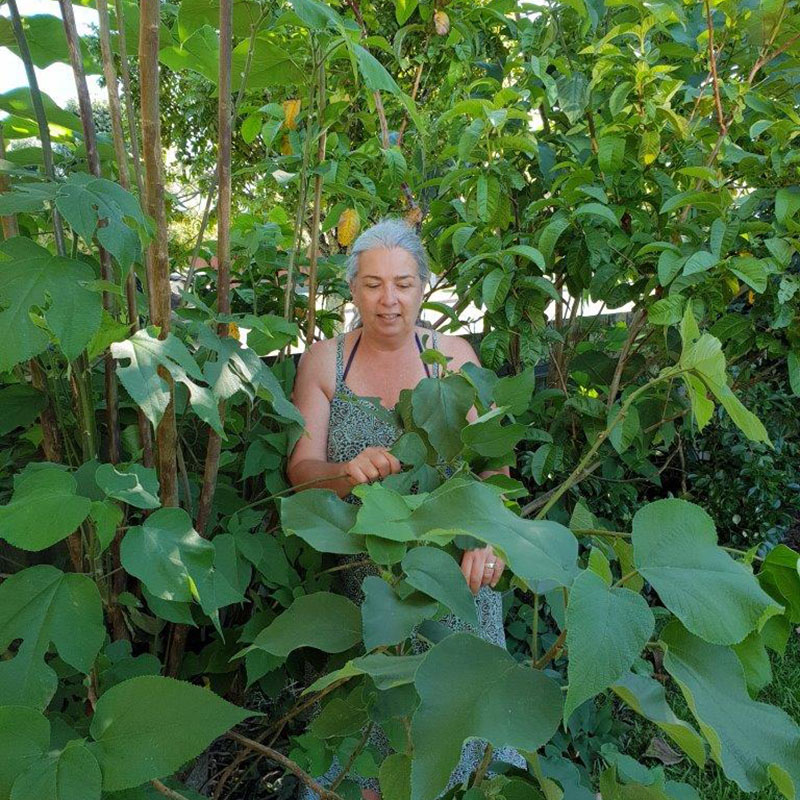 Sue Pearson is a Norfolk Islander and a member of the ‘Ahu Sistas, a collective of four vahine (women) who descend from Pitcairn Island. For 15 years, they have researched and protected the ancestral knowledge of ‘ahu (Pitcairn bark cloth). Sue is now based in Whakatāne, where she has cultivated and harvested aute (paper mulberry) for ten years. She is supported by her son John Clark, who teaches the art of making kapa (Hawaiian bark cloth) to schoolchildren in Hawai‘i.

We’ll be livestreaming Toi Tuku Iho for those who can’t make it to Te Papa.

Immerse yourself in mātauranga with an incredible panel of toi Māori practitioners sharing how Matariki has influenced their work practice.

Nikau Hindin (Ngai Tūpoto, Te Rarawa, Ngāpuhi) is a bark cloth maker who works with aute (paper mulberry) and natural earth pigments. She is dedicated to reinvigorating the art of aute in Aotearoa. Her work spans the process of making bark cloth, from growing and harvesting, to processing the inner bark, and creating a fine white cloth. Nikau is actively sharing this knowledge with a new generation of makers. Her work is inspired by Māori astronomy and concepts of time and space. 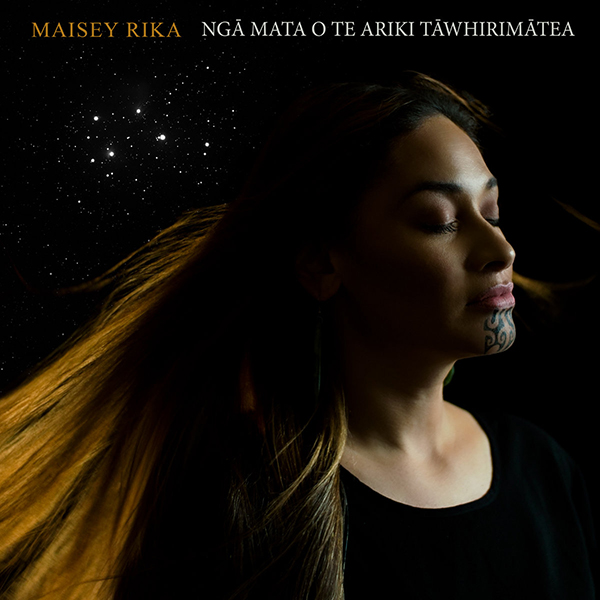 Maisey Rika (Ngāti Awa, Tūhoe, Te Arawa,Te Whānau-ā-Apanui, Hamoa) is a New Zealand multi-award winning Māori singer-songwriter. Maisey has produced five acclaimed original albums, all of which have all reached NZ’s Top 40 Album Chart. She was named an Arts Foundation Laureate in 2021, has received awards at the Waiata Māori Music Awards and APRA Awards, including APRA Best Māori Songwriter in 2010 and 2013, and has twice won Best Māori Language Album at the NZ Music Awards. Widely regarded as a national treasure, Rika has toured extensively internationally and shared stages with Grammy Award winners, as well as working with her contemporaries closer to home. Her soulful and elegant style traverses a musical palette of te reo, folk, acoustic, soul, and easy listening, bringing her international stardom that is deeply grounded in Aotearoa. 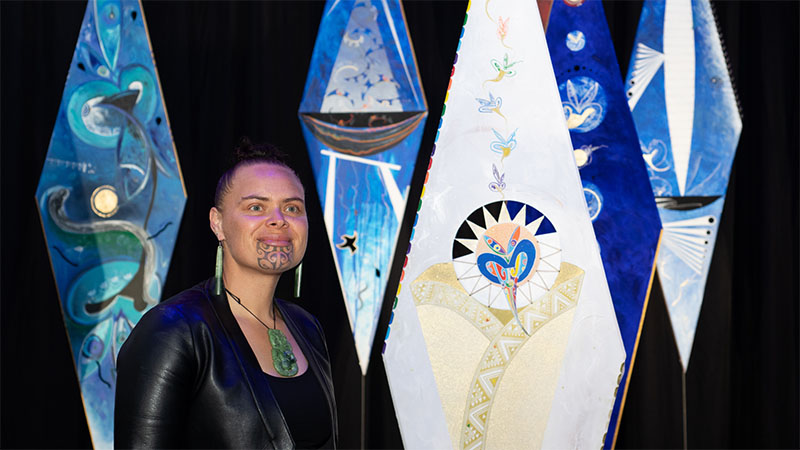 Erena Koopu (Te Whānau-ā-Apanui) is a painter and Māori performing artist committed to sustaining Māori culture through art by guiding and helping people to explore and discover their own creative core. Erena was one of the first students to graduate with a degree from EIT Tairāwhiti’s Toihoukura – School of Māori Visual Arts. Since that achievement, she has come full circle and is now responsible for Toihoukura’s Te Toi o Ngā Rangi: Bachelor of Māori Visual Arts degree and Level 4 Foundation Certificate. Erena is also senior painting lecturer, a role which allows her to investigate art in a framework that encompasses all aspects of Te Ao Māori for students who may have little to no experience of a Māori worldview of art and its related protocols.

Reserve your spot for Panel talk: Matariki in Art Practice

We’ll be livestreaming Matariki in Art Practice for those who can’t make it to Te Papa.