Past exhibitions that opened in 2003 – from Signs and Wonders | He Tohu He Ohorere to Wild Design.

Wild Design began by introducing the natural environment as visitors might have never seen it before. Magnified photographs showed minuscule parts of nature enlarged so their structures and patterns become objects of beauty. It celebrated the intricate designs of the natural world, and looked at how these have been reflected in human art and design.

Large graphics filled the second section, where comparisons were made between structures in nature and human design. For example, a magnified photograph of pollen was compared to the Sagrada Familia Cathedral (Barcelona, Spain), DNA was compared to the bridge over the Firth of Forth (Scotland), and the curve of a staircase was compared to a spiral shell.

Beautiful decorative arts by Minton, Doulton, Bianchini Férier, and some of New Zealand’s leading artists and craftspeople were showcased in the third section, a place where visitors could see how aesthetic works show the influence of nature. The exhibition was made up of objects from Te Papa’s natural environment, history, and art and visual culture collections.

From the model pterosaur to the moulting penguin and the dazzling array of winged insects, Wings: Nature’s flying machines was rich with great items from Te Papa’s collections. Manu tukutukuManu tukutuku Māori kites and boomerangs illustrated the role of artificial wings in people’s cultures and lives. Diagrams, working models, video clips, and interactives offered surprising and sometimes novel insights into how flight happens.

Visitors could discover how flying developed, why wings are essential for flying, and the many other purposes that wings serve. Wings explored how people have made use of nature’s wings and how, through observation and ingenuity, they have become wing-makers and fliers themselves. 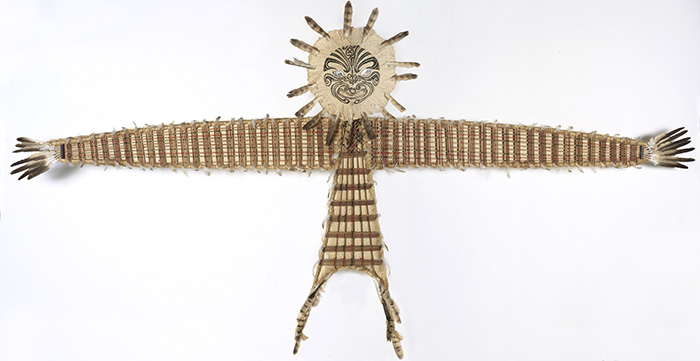 Kiri’s Dresses: A glimpse into a diva’s wardrobe

This exhibition celebrated the powerful and innovative work of the artists of Ngā Kaihanga Uku, the Māori clayworkers’ collective: Baye Riddell, Manos Nathan, Colleen Urlich, Wi Taepa, and Paerau Corneal. Māori creation stories of fire, water, and earth provide the foundation for their work. Innovation grows out of tradition.

Signs and Wonders | He Tohu He Ohorere

This exhibition of more than 160 art works from Te Papa’s collection explored how people express spiritual beliefs and supernatural experiences in visual culture.

Beginning with an exploration of light and colour, the exhibition moved into a symbolic world of prophesies, visitations, and annunciations, and from there to art works reflecting creation and birth, the apocalypse, death, and the afterlife.

TaongaTaonga treasures of immense power and significance featured, such as the great mere pounamumere pounamu greenstone weapons Kauwhata and Wehiwehi of Waikato, and an 1878 chalice carved by the tohunga whakairotohunga whakairo master carver Anaha Te Rahui of Ngāti Tarawhai to celebrate peace between peoples. Also included were sacred objects such as a medieval French embroidered crucifix and an 11th-century Indian granite Ganesh statue.

Te Awa Tupua: The Whanganui iwi was the fourth in a series of iwiiwi tribal exhibitions developed in partnership with Te Papa. The journey of the Whanganui River people reflects the qualities and moods of their river – grandeur and mystery, turbulence as well as steady flow.

The exhibition included wakawaka canoes that have travelled the river highway, and the fishing technology that has been used to harvest the river’s bounty. Other taongataonga treasures illustrated the knowledge and skills of their artists. A gallery of historical photos brought a diverse record of ancestors. Videos and an interactive showed the spectacular beauty of the river and its landscape.

The well-being of the river is intertwined with its people’s well-being. The exhibition told how both the river and the iwiiwi tribe have been affected by changes to lands and to the use of their river’s resources. Also explored was how these issues came together in the Pakaitore (Moutoa Gardens) occupation in 1995.

On display in Dinosaurs from China was a wide range of dinosaurs, many of them dating back over 150 million years to the Jurassic Period. They included some spectacular specimens – gigantic lumbering sauropods such as the 24-metre-long Mamenchisaurus, Stegosaurus with its sharp spines and sturdy plates, and vicious predators such as the terrifying Yangchuanosaurus. The latter is a Chinese relative of Tyrannosaurus rex, with sharp, jagged teeth, long claws, and sturdy arms – ideal for tearing up the flesh of its prey!

Dinosaurs from China was a great introduction to the study of fossils, and a special Dinosaur Trail activity was developed for younger children. Highlights in the exhibition included information and objects relating to one of the most exciting areas of dinosaur discovery in recent years – the evolutionary connection between dinosaurs and birds.