Past exhibitions that opened in 2014 – from The Berry Boys: Naming the Kiwi faces of World War I to Kāhui Raranga: The art of tukutuku.

On this page:
CHINA Throne of Emperors and Shi Lu: A revolution in paint
The Berry Boys: Naming the Kiwi faces of World War I
Kāhui Raranga: The art of tukutuku
Road to Recovery: Disabled soldiers of World War I
Tyrannosaurs – Meet the Family
Shrek the Sheep: A loveable southern rogue
Azog™ the Defiler
Middle of Middle-earth Costume Trail
Air New Zealand 75 Years: Our nation. The world. Connected

CHINA Throne of Emperors and Shi Lu: A revolution in paint

Jointly developed by the National Museum of China and the Museum of New Zealand Te Papa Tongarewa, these two stunning exhibitions featured imperial treasures from two millennia of Chinese civilisation and the revolutionary art of modern master Shi Lu.

Throne of Emperors explored the lives of seven of China’s most important emperors, from the reign of Qin, First Emperor, (250–210 BCE) to the overthrow of the last emperor in 1911. Shi Lu: A revolution in paint presented an overview of the art and life of Shi Lu (1919–1982) set against the background of China’s 20th century. It was the first major exhibition of this significant artist’s work in Australasia.

The Berry Boys: Naming the Kiwi faces of World War I

As part of Te Papa's First World War commemoration programme, Te Papa sought to identify a group of mystery soldiers, known as the Berry Boys, and their loved ones. This intimate exhibition presented the information uncovered about these soldiers through the combined efforts of Te Papa and an enthusiastic public, and offered the opportunity to further discover the stories and identities of the men depicted. 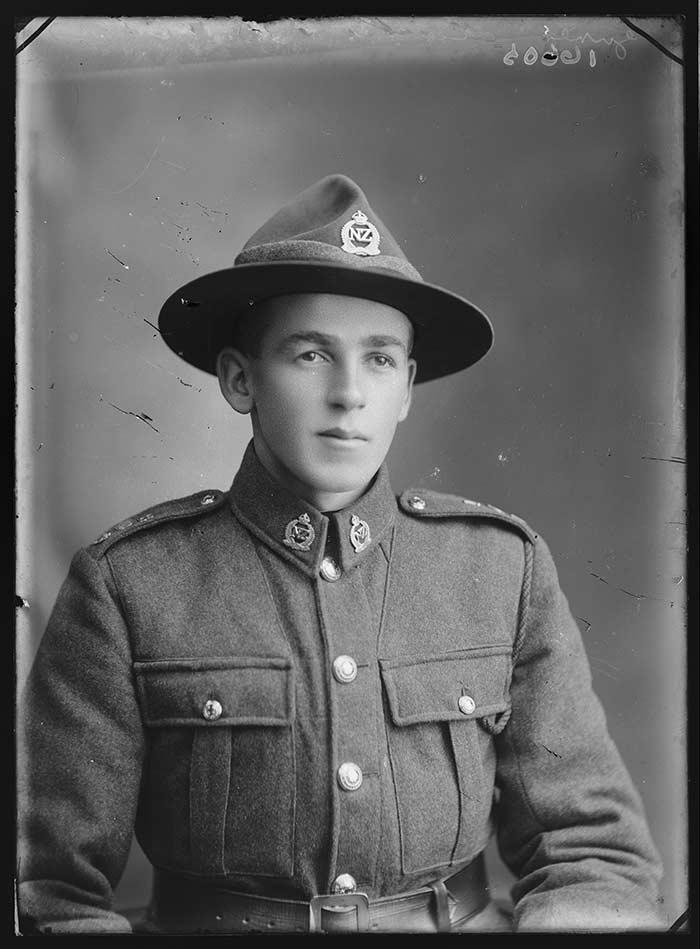 Kāhui Raranga: The art of tukutuku

Tukutuku are woven panels that decorate the walls of Māori whare tipunawhare tipuna ancestral houses, telling stories of the people and land from which they came. These panels were made by talented weavers from Te Roopu Raranga Whatu o Aotearoa National Weavers Organisation, in association with the Jack Lawless Whānau Trust, on commission to the New Zealand Government. Guiding the group was renowned weaver Christina Hurihia Wirihana.

The exhibition explored how New Zealand soldiers disabled in World War 1 were supported to regain their personal and economic independence. It reflected on the unimaginable physical destruction caused by war, as well as the bravery and resilience of New Zealanders injured in the hostilities.

Eight large-scale exhibition prints taken during the last year of the war poignantly illustrated some of these efforts at self-reliance. The photographs were displayed with examples of handwork carefully crafted by soldiers recovering in hospital and by returned veterans whose disabilities made it impossible for them to hold down full-time jobs. 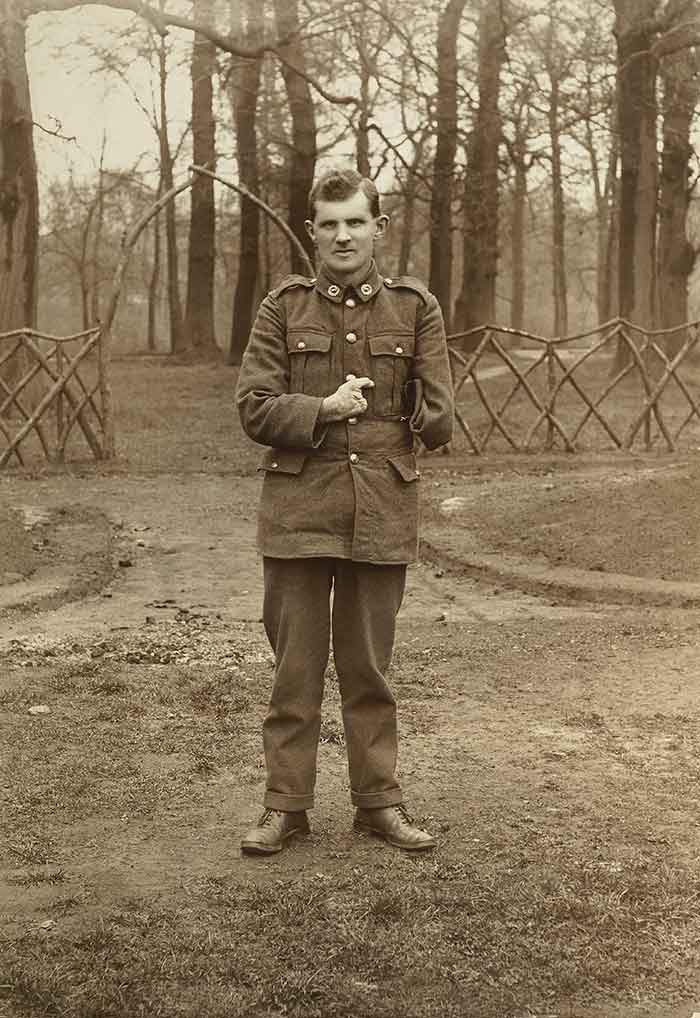 An interactive exhibition for visitors of all ages, Tyrannosaurs – Meet the Family featured augmented reality, multimedia experiences, and hands-on fun. Providing a snapshot of dinosaur life, it explored how Tyrannosaurus became the world’s top predators with their massive skulls, powerful jaws, and bone-crunching teeth, from the most well-known T. rex to the tiny Dilong, the ‘emperor dragon’, with a skeleton just 1 metre long.

Discovered in 2004 after six years of evading shearers in the rugged terrain of Central Otago, Shrek the sheep became an instant celebrity and a national icon. Shorn live on television, Shrek yielded a record 27 kilograms fleece and became a charitable symbol, touring the country with owner John Perriam to raise money for organisations such as Cure Kids and Tarras School. The students of Tarras School in Central Otago created art works and an audiovisual for this exhibition to celebrate New Zealand’s most famous sheep. 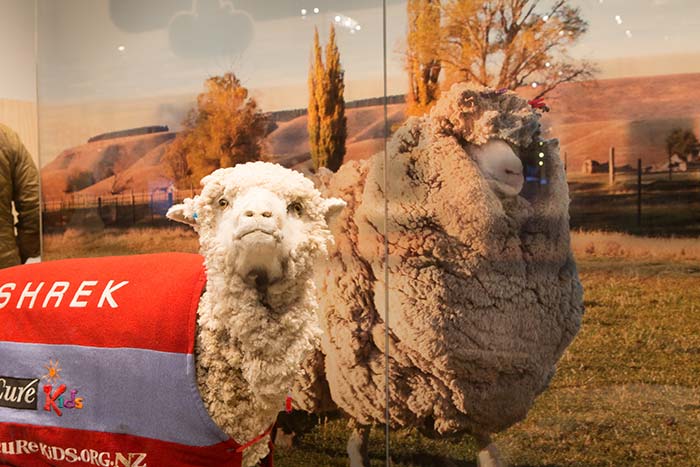 The statue of Azog™ the Defiler loomed over the Level 2 Foyer, offering visitors the chance to take and share selfies with the vilest orc in Peter Jackson’s Hobbit trilogy. In the films, Azog™ was a digital creature, created by Weta Digital using motion capture technology and played by actor Manu Bennett. The 3.5 metres (11 ft 6 in) tall fibreglass statue on display at Te Papa was created by Weta Workshop's artists and sculptors, based on the digital model used in the first film: The Hobbit: An Unexpected Journey.

© Warner Bros. Entertainment Inc. All rights reserved. THE HOBBIT: AN UNEXPECTED JOURNEY and the names of the characters, items, events and places therein are trademarks of The Saul Zaentz Company d/b/a Middle-earth Enterprises under license to New Line Productions, Inc.          (s14)

Amazing Elf Solider and Elf Lieutenant costumes from the Hobbit trilogy, designed by Weta Workshop and 3 foot 7 costume department, were on show at Te Papa as part of the Middle of Middle-earth Costume Trail. These two costumes were part of a selection of 20 displayed at various locations around Wellington.

This dynamic, interactive exhibition led visitors through the decades from Air New Zealand’s first flight, on 30 April 1940 between Auckland and Sydney, through inspiring stories of the airline’s growth and innovation. The cockpit of a Boeing 737 on Te Papa’s forecourt offered the opportunity to sit in the pilot’s chair and pose with the nose.

Aviation enthusiasts could see the motor, driveshaft and propeller from Richard Pearse’s original aircraft. Fashion lovers could follow style trends through the airline’s uniforms up to the present and try on modern Trelise Cooper designs. 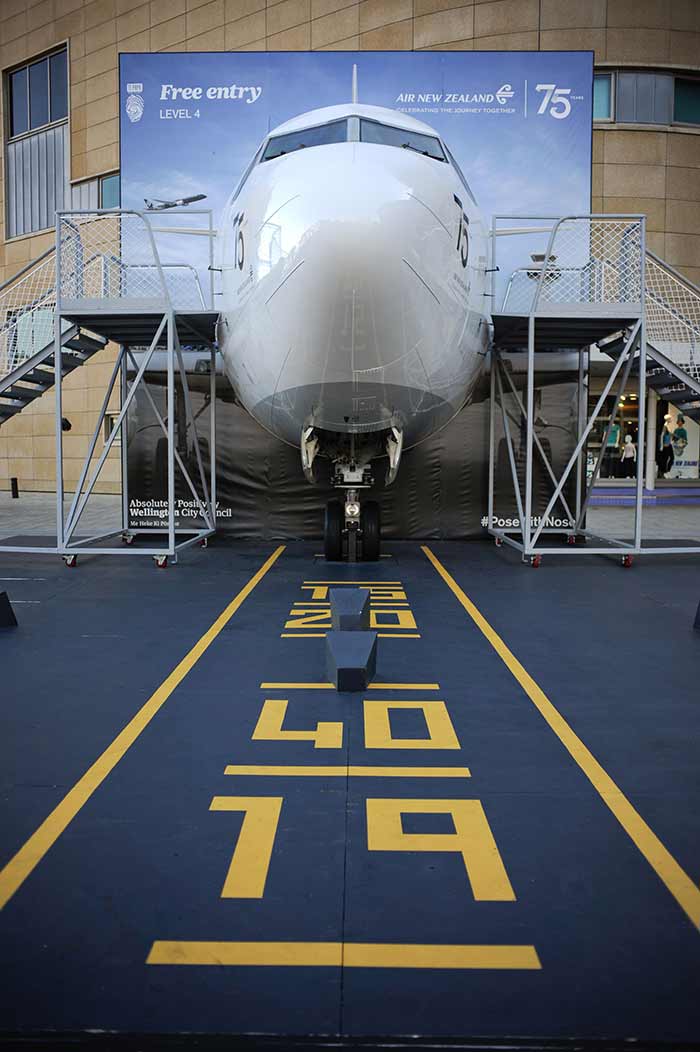