‘Finales represent an end, and as such tend to be celebratory in tone’ – Nike Savvas on ‘Finale: Bouquet’

Nina Tonga: How has your training as a painter influenced your approach to installation and sculpture?

Nike Savvas: As a student of painting in the 1980s I was inspired by the wonderful and varied transformations that painting had undergone in the recent past. The different material and conceptual approaches, processes and methodologies had me fully engaged in the histories, ideologies, politics, problems and boundaries of what had come before. The paradigm shifts that occurred since have opened into a bright new horizon of wonderful possibility.

As a painter I became increasingly dissatisfied with its assumed two dimensionality and the prescribed limits and materials normally associated with painting. I began questioning the nature of painting – to challenge many of the prescriptive cultural and material conventions that underpinned my understanding of what painting was, or could be. Painting’s maturation in the post-medium condition extended its possibilities across all domains and opened my practice to a broader experiential zone of conceptual, spatial, physical, pictorial, perceptual and sensorial immersion. Challenging painting’s conventions led to an interest in what painting could offer the viewer under these different conditions.

This approach quickly developed into a central concern while maintaining the name of painting as a major force and imperative for my practice. In this respect I specifically choose not to label my work as sculpture. This is not because I have anything against sculpture per se. I prefer to link the work directly to its source of origin – its specific terms of reference, ‘painting’. I tend to refer to my three-dimensional pieces as objects, forms or structures. To refer to them as sculptures would be to position them within a specific and very different historical dialogue, and informed by a very different set of imperatives that I feel is perhaps not as sympathetic to my chosen terms of reference and to the dialogical tone, conversation and outcomes that I am seeking to invoke. 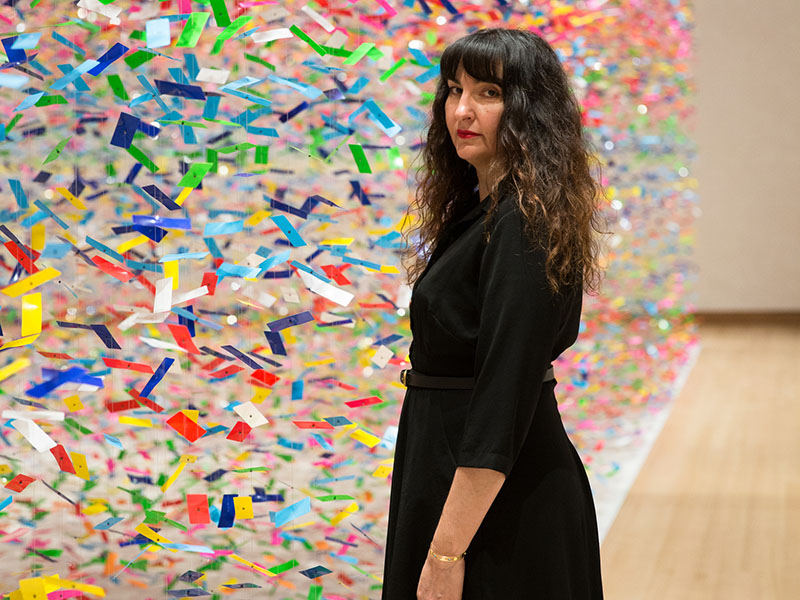 NS: Each work is a conversation, and each work has a specific outcome. I find it interesting to work within my own prescribed systems to see what evolves. These outcomes engage opticality, kinetic elements, suspensions, bunting, unconventional materials, limited forms and structures. Often there are quite a few unexpected surprises to be found along the way. I think this is very interesting and it often spurs me on to revisit these systems but I make a point of altering them each time so as to realise some new point of life or difference within each work. For the most part, these systems tend to be material, conceptual, research and process based. I also often work in series where the pieces are unique but share a commonality of title.

Working in series also infers a beginning and an end. I have never been interested in repeating the same decisions over and over again. Such an approach would see me re-make the same work without good reason and it would also give rise to sameness over difference. I think maintaining and valuing difference within a series is essential as it invites multiple levels of engagement and different outcomes that become key to evaluating and consolidating why we began the series in the first place. I see this form of consolidation as being incredibly constructive as it brings clarity, completion and closure to a project or series.

NT: Can you share a bit more about the process of making Finale: Bouquet and what has influenced this work? Why the ‘finale’?

NS: Finales represent an end, and as such tend to be celebratory in tone. The initial inspiration for my Finale series came through multiple sources. Some include early ticker tape parades where people were immersed in a storm of confetti cut ticker tape streamers. A further point of interest for the ticker tape rationale came from researching its history. Ticker tape was the earliest electronic digital communication system and was used to transmit stock transaction price and volume information across telegraph lines. These thin paper strips were made by a machine called a stock ticker. While paper ticker tape became obsolete in the 1960s, the stock ticker continues in digital form on brokerage walls. In this, art’s (Finale’s) longstanding relation with commerce and consequently politics, seemed particularly poignant.

As representative of ‘celebration’ the ticker tape parade that took place in New York City in August 1969 honoured the successful passage of Apollo 11 to and from the Moon. While this celebration signified closure the event itself marked a profound shift and heralded a future with boundless possibilities. Historically, the first ever parade [New York City, 1886] saw employees spontaneously throw ticker tape from their office windows to join the celebrations. This speaks directly to the spirit of the moment, to freedom, individuality and inclusion. While Finale may speak to closure, similarly it also alludes to new open-ended possibilities.

This work is a finale for our current times – a time where I feel a major paradigm shift is well overdue. The so-termed Creative Industries has in recent times seen the development of the professionalisation of arts into a model whose main imperative is predicated on the administration of commerce. I feel I am tapping into the sentiment of this time. The work references abstraction as a historical and political precursor while inviting participation on many other levels. There is a sense that art has failed. That arts virtues have been corrupted or that faith in its ability to critically and meaningfully engage through protest, provocation or reactive action has been diminished in the face of a branded, corporatised, culturally sanitised infrastructure that lies at the heart of arts current constitution.

As a child I lived in Canberra. The greatest defining moment of this period was my proximity to Jackson Pollock’s Blue Poles at the National Gallery of Australia. Blue Poles was perhaps the most powerful centre piece of the gallery’s collection. As a student in my formative years I was transfixed by this painting. Why was it so controversial? Why was it a good painting? Why did people love it? Why did they hate it? Why did every conversation revolve around how much it cost? As the poster boy for abstract expressionism, Jackson Pollock’s role in the cold war politics of the West (representing ideological and cultural values such as individualism, liberalism, freedom and democracy) was incredibly informative for me in those developing years.

Finale also transports me into the domain of abstract expressionism through colour, gesture, space, systems, layers, scale, immersion and the transportation of the viewer into different realms. Since working on Finale, I recently had the pleasure of viewing the Lee Krasner exhibition at The Barbican Centre in London. Not only was she incredibly prolific as a painter, she was also a pivotal force in the abstract expressionist movement. I was genuinely surprised at the overlaps I observed between Krasner’s practice and Finale – and especially evident in the series Small Paintings. Historically presented as a male-dominated movement, abstract expressionism had a number of female artists centre stage and actively involved at that time in the development of this genre. Often glossed over, their absence and their incredible contribution to this period demands to be acknowledged and their legacies valued and amended within the historical record of art.

Painting today covers so much different territory than it has in the past. Painting’s continuation in what has been referred to as the current post-medium condition means that it can now exist beyond traditional materials and creative conventions and is openly connected to a vast network of stimuli. These could range from different scenarios, unconventional materials, everyday objects, digital media, formal systems and abstract associations such as metaphor and allegory, to non-hierarchical systems such as [Gilles] Deleuze and [Pierre-Félix] Guattari’s model of a rhizomatic approach where multiplicities are apprehended through diverse points of entry. On these terms, any perceived gap that separates an installed work like Finale from abstract expressionist painting is minimised, and is more akin to familiar resemblances observed between siblings.

I hope the experience of Finale is empowering, that it engages the viewer’s sensory and interpretative faculties by encouraging participation on a physical, optical, perceptual and experiential level to validate the viewer’s experience and their construction of personal meaning. 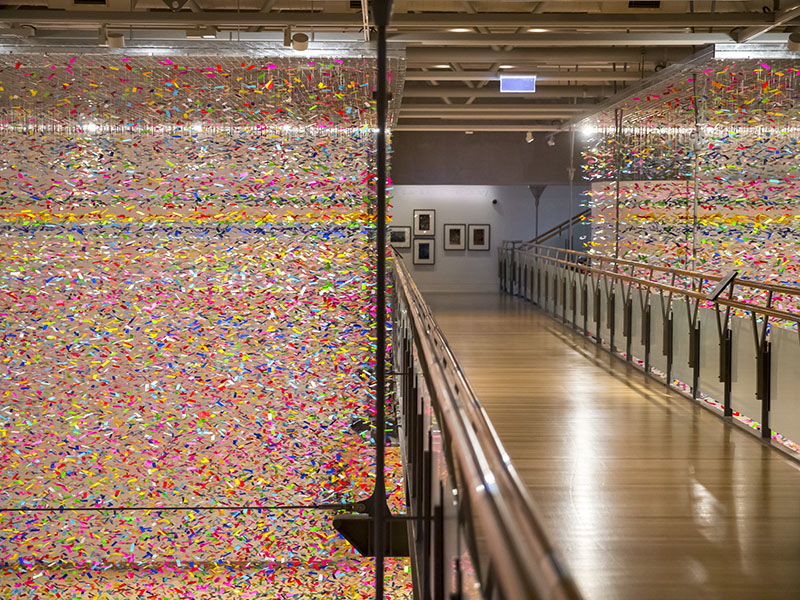 NT: Finale: Bouquet has a very vibrant colour palette. What has inspired your colour choices for this work?

NS: I wanted to make a field or bouquet of colour that related to specific flora, and the colours found in New Zealand were a great inspiration. The beautiful watercolours of artist Sarah Featon proved particularly instructive. My colours were derived from the following flora: kōwhai, forget-me-not, white mountain lily, taurepo, kākābeak, mānuka, pōhutukawa and sun orchid.

My approach incorporates years of studying different aspects of colour theory. Over time I have developed an attuned sensitivity to working with colour relations at a complex and highly sensitive level – materially, spatially, optically, perceptually and also intuitively. This has proved to be crucial in respect to the colours chosen and the layout and spacing of each coloured tab.

NT: The strands of Finale: Bouquet are suspended yet are constantly fluttering. Why is movement integral to this work?

NS: It is important that the experience is a live encounter for the viewer. Here, things start and stop. The work sits in your direct line of vision, but simultaneously dances and flickers at the periphery of one’s vision. While this creates a tension within the work, these moving components create soft continuous perceptual shifts that are not enough to fatigue the eye. The work creates a vast, soft space for reflection. There is no prescribed way to experience the work – no right or wrong way. I see this as a quiet moment between the viewer and the work, a personal, fluid moving zone for reflective exchange.