Colossal Squid: Our iconic cephalopod gets a clean in preparation for display

An update on the Colossal Squid, currently taking a well-earned break: she’s had a bath.

Over the last week a small but highly proficient and technically-minded team have been giving one of the nation’s most loved deep ocean ambassadors some richly appreciated TLC.

While most of Wellington was swooning over a cetacean in the harbour, our team were working away behind the scenes on our resident cephalopod, the Colossal Squid, preparing her for the move into what will be her spot for the spectacular new nature zone, opening in 2019.

The team drained the solution that has been supporting the Mesonychoteuthis hamiltoni Robson, lifted the tank lid, and gently lowered the mantle, body, and tentacles from their mounts for some maintenance

With the weight of the tank lowered, after the removal of some 3,000 litres of glycol water, squid-infused solution, the tank with specimen was moved into position with pinpoint accuracy by honed eyes.

As the specimen was exposed and examined, the team were pleasantly surprised at the remarkably good condition that she was in after her years on display. And contrary to what we may have been expecting, no fishy smell.

The tank was given a check over and the detritus that has gathered since its last clean was sucked out. A fresh glycol water mix has since been added and the squid remounted into position. The difference to our elegant girl of the deep was startling as she was revealed in the crystal clear solution.

And with that she'll be boxed up in a protective cover and having a well-deserved rest before she’s back on show next year. 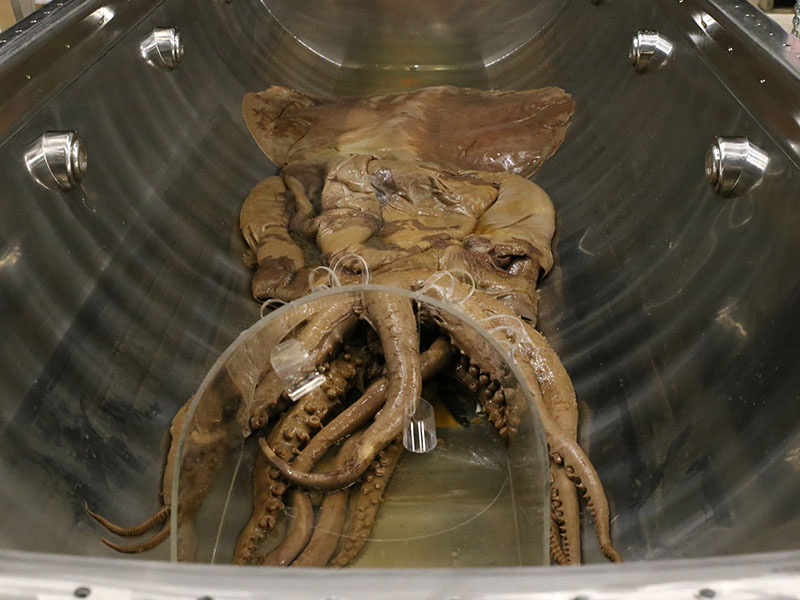 The colossal squid in its drained tank, 2018. Photo by Jack Fisher. Te Papa