It is with great sadness that we learn of the passing of Dr Alan Baker, the last Director of the National Museum of New Zealand.

Dr Baker died at his home in the Bay of Islands on Friday 13 October. He had been diagnosed earlier this year with motor neurone disease. He was 77.

“Dr Baker was a deeply passionate and committed natural history curator and researcher," said Kaihautū Arapata Hakiwai. “Te Papa recognises his immense contribution over many years in helping us to better understand our natural environment and our place with it. He will be sadly missed.” 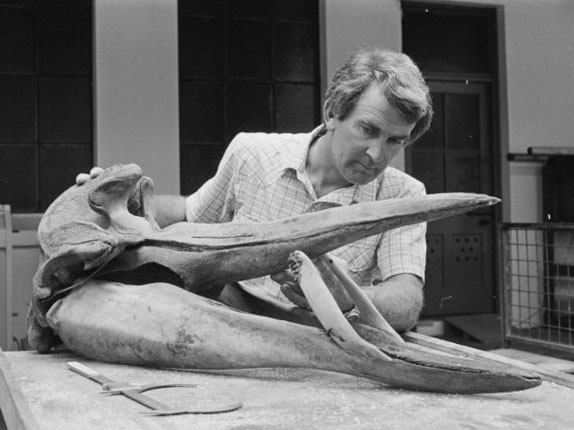 Dr Baker studied for his BSc and PhD at Victoria University in Wellington, and was appointed to the Dominion Museum in 1969 as Curator of Echinoderms.

He was one of a new generation of natural history curators that joined the staff in the 1960s under the leadership of Dick Dell and who recognised the need for systematic collecting throughout New Zealand, the south-west Pacific, and the Southern Ocean. Several large collecting expeditions were undertaken, and the natural history holdings of the museum expanded significantly from that time.

Dr Baker developed expertise in two quite different fields. He was an expert in echinoderms, a group of marine invertebrates that includes starfish, sea-urchins, and kina, but he was also equally renowned for his knowledge of marine mammals. He was appointed Curator of Marine Mammals in 1978, and under his curatorship, both groups expanded into world-renowned collections.

He published over 60 papers in scientific journals and almost 30 reports and popular articles on marine invertebrates and marine mammals, as well as another five papers on museology. In 1986 he was involved in the discovery of a completely new class of marine animal that he called a Sea Daisy. The discovery was sufficiently important for a photograph of the animal to be published on the front cover of the prestigious journal Nature. He also wrote two books: Whales and Dolphins of New Zealand and Australia and, with Mike Daniel, The Collins Guide to the Mammals of New Zealand.

However, shortly afterwards he left to work at the Department of Conservation for a few years, joining colleagues there with whom he had collaborated for much of his career.

In retirement he fulfilled a long-held dream and moved to the Bay of Islands to indulge his passions of sailing and fishing.