Rongowhakaata welcomed as iwi in residence

Representatives of the iwi travelled to Wellington, following a consignment of over one hundred of the taonga, which will be exhibited for two and a half years here as part of their iwi exhibition Ko Rongowhakaata: The Story of Light and Shadow.

Rongowhakaata iwi carried their taonga onto Rongomaraeroa marae to mark the beginning of their time as Iwi in Residence at Te Papa, in advance of their exhibition opening later in 2017.

“The taonga has been brought together for this exhibition in a dedicated effort by the tribe’s five marae – Manutūkē, Ōhako, Pāhou, Te Kurī, and Whakatō, each of which participated in the Rongowhakaata Marae Exhibition Rukupo in 2016,” Rongowhakaata Kaumātua Lewis Moeau said.

The whare was confiscated earlier that year by the Minister of Native Affairs and Acting Director of the Colonial Museum, James Crowe Richmond supported by government troops.

In 2012, as part of the Treaty of Waitangi settlement between Rongowhakaata and the Crown, the New Zealand government apologised for the forcible removal of Te Hau ki Tūranga, stating that the whare belongs to Rongowhakaata.

The Colonial Museum made extensive changes to the house in the 1920s and 1930s. Rongowhakaata is now developing a plan to restore the whare during the term of their residency here at the museum. 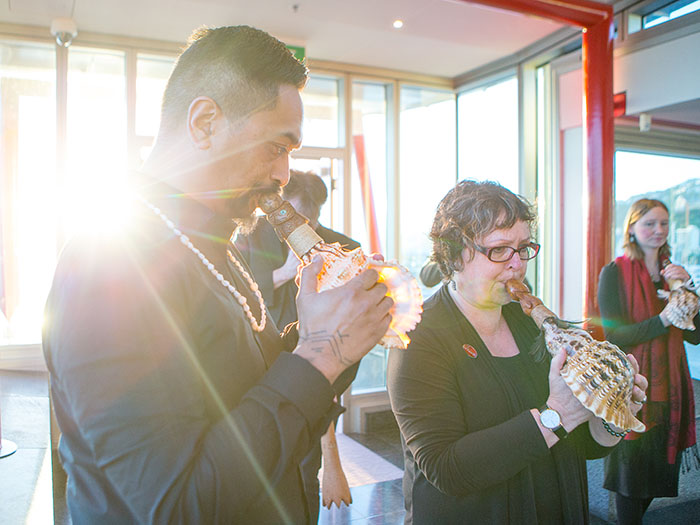 The exhibition Ko Rongowhakaata: The Story of Light and Shadow focuses on the iwi’s dramatic story of innovation and adaptation and their visceral need to express their world through the spectrum of arts.

The theme of light and shadow refers to the impact of light on the iwi’s environment, the East Coast landscape, and how this influences their artistry. It is also a metaphor for their story of dynamic contrasts, founded on their enduring relationships with their land and among their people.

Senior Curator Mātauranga Maori Puawai Cairns says the exhibition has been a deeply significant project to work on.

“Te Papa is privileged to share the stories of Rongowhakaata creativity, innovation, and tenacity. This is an exceptionally taonga-rich and powerful iwi exhibition,” she says.