The Fishes of New Zealand has been awarded the 2016 Whitley Medal for outstanding publication in Australasian zoology by The Royal Zoological Society of New South Wales. The medal is regarded as Australia's highest award for zoological publishing and this is the first time it has been won by a New Zealand publication.

Written and edited by Te Papa’s fish team of Clive Roberts, Andrew Stewart and Carl Struthers, and published by Te Papa Press in November 2015, the four-volume book is the culmination of decades of collecting and research by the three Te Papa–based scientists, in collaboration with more than 40 specialists worldwide. 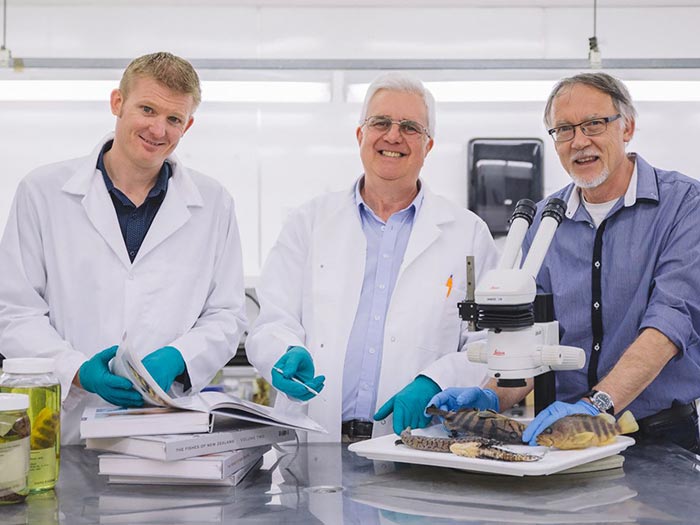 The Whitley Medal was presented to Roberts, Stewart and Struthers in a ceremony at the museum in Sydney last night by the Australian Museum’s Ichthyology Collection Manager Mark McGrouther.

“We all worked very hard to produce a comprehensive, detailed and practical guide for the benefit of New Zealand, Australia, and the international science community,” he said.

The Fishes of New Zealand identifies many newly discovered fish species, including more than 140 that are new to New Zealand. The book was praised by the awards panel for delivering something new.

“In order to be awarded the Whitley Medal, publications need to break into areas that haven’t been explored before. The Fishes of New Zealand has done this. This is a truly remarkable collection of books,” said Zoological Society Councillor Arthur White.

Te Papa Press Publisher Nicola Legat said that the award was a real tribute to the teams that had worked so hard over such a long time to bring it to fruition.

“It is a landmark for both scientific research and for publishing,” she said.

NIWA CEO John  Morgan said NIWA is extremely proud to be part of such an important co-operative publishing achievement that advanced knowledge and understanding of the extraordinary range of fish found in New Zealand waters.

“This is an outstanding example of collaborative effort in the true spirit of science,” he said.

The Fishes of New Zealand is available for purchase online from http://www.tepapastore.co.nz/products/the-fishes-of-new-zealand and in the Te Papa Store.

The Fishes of New Zealand represents the culmination of decades of collecting and taxonomic research by scientists based at New Zealand’s national museum, Te Papa, in collaboration with specialists worldwide. It reveals the history, diversity and biogeography of the region’s rich freshwater and ocean life across New Zealand’s vast aquatic environments.

Comprising thorough and accessible descriptions of each of the more than 1250 species found in New Zealand waters, this essential four-volume book introduces many newly discovered and identified specimens, and more than 140 species new to the area. Each species features diagnostic, taxonomic, distribution and biological detail, accompanied by richly produced photographs, maps and illustrations.

This landmark publication is an indispensable reference for researchers, conservationists, professional and recreational fishers, and anyone interested in the unique aquatic biodiversity of Aotearoa New Zealand https://www.tepapa.govt.nz/about/te-papa-press/te-papa-press-natural-history/recent-title-fishes-new-zealand

Clive D Roberts
Dr Clive Roberts has been Curator of Fishes and leader of the fish team at the National Museum and Museum of New Zealand Te Papa Tongarewa since 1992. Clive is an experienced field worker who has led numerous expeditions sampling New Zealand fish faunas, with teams of scientists using scuba in coastal waters and commercial and research vessels offshore in the deep sea. In 2003, he was science leader of the NORFANZ voyage on GRV Tangaroa. He has published a large number of scientific papers and popular science articles and is particularly interested in the taxonomy, diversity and biogeography of fishes of the Pacific Ocean. Clive was co-author of New Zealand fish, a complete guide and The Rockpool fishes of New Zealand. He is lead editor of The Fishes of New Zealand.

Carl D Struthers
Carl Struthers has been Research and Technical Officer at the Museum of New Zealand Te Papa Tongarewa since 2005. Carl is currently researching the taxonomy and phylogeny of the families Sebastidae, Moridae and Aulopidae in New Zealand and the South Pacific, and has published scientific papers on several New Zealand fish families. His work also includes photography, digital imaging and radiography of fish specimens in support of ongoing research projects. As Te Papa’s Dive Officer, Carl is responsible for the underwater dive programme and its safe implementation. He is an experienced field worker, participating in many fish collecting expeditions using scuba in coastal waters and blue-water expeditions to remote locations, both within and outside New Zealand waters (e.g. Kermadec, Auckland and Three Kings Islands).

The Whitley Awards are for outstanding publications that promote Australasian fauna and especially its conservation. The Whitley Medal and Special Commendation are the most sought-after prizes in Australian zoological publishing. Whitley Certificates of Commendation are also awarded each year in a number of categories.