Hundreds of the abstract artworks created by acclaimed New Zealand artist Max Gimblett ONZM to commemorate those who served in World War One are now on display at Te Papa. 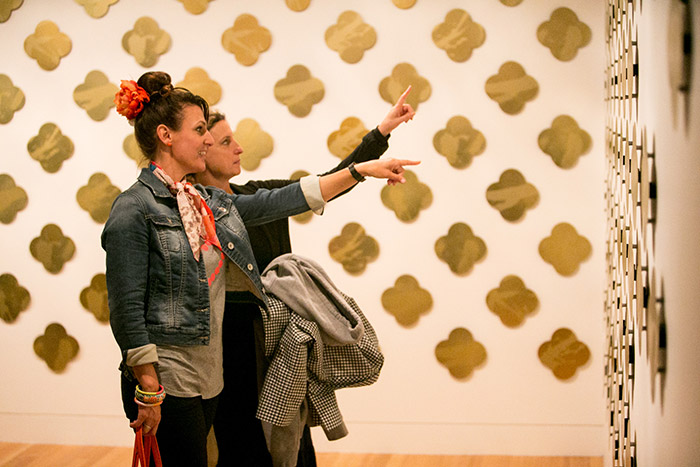 Several thousand of the brass quatrefoils were made last year to hang on the exterior of St David’s soldiers’ Memorial Church in Auckland as part of The Art of Remembrance project. Each represents a New Zealander who served in the first World War, and is intended as a public message of peace and hope.

“We’re thrilled to be showcasing Max Gimblett’s artistic response to a commemoration that’s been such a big part of our thinking in the past year,” says Te Papa’s Senior Art Curator Sarah Farrar.

“It’s fitting to have these works of art on display at the national museum in time for the 2016 ANZAC Day commemorations,” says Ms Farrar.

With each quatrefoil the size of a soldier’s outstretched hand, Te Papa will also acquire a full set of seven to go into its permanent collection.

The Friends of St David’s Trust is raising money through the sale of the Gimblett artworks, and through donations, in the hope that it will be possible to restore St David’s Church, with its magnificent stained glass windows and its strong theme of First World War remembrance.

“The quatrefoils have captured the imagination of New Zealand families and organisations wishing to have a permanent “artwork of remembrance” for the First World War, created by New Zealanders,” says Paul Baragwanath, curator and director for The Art of Remembrance project.

“We have only a few hundred of these Gimblett artworks still available for purchase. They are the same quatrefoil shape that was exhibited at New York’s Guggenheim Museum, and those that are on display in Wellington.”

The exhibition at Te Papa runs until 22 May.

More details on The Art of Remembrance project can be found here: www.rememberthem.co.nz