A rare panoramic wallpaper depicting scenes from Captain Cook’s Pacific voyages has been purchased by Te Papa for the national art collection.

Les Sauvages de la Mer Pacifique is a French-made wallpaper from 1804-5. The set Te Papa has purchased contains 18 of the 20 original “drops” of wallpaper, and has a total size of 2 metres high by 10 metres wide.

Known as the Dufour wallpaper, there are few complete or near-complete sets of this wallpaper in the world, and the majority are in private hands.

Te Papa purchased the wallpaper from a rare books dealer in Sydney for $230,000, with funds from the Charles Disney Art Trust.

Over 23 different indigenous groups from throughout the Pacific are shown in the art work including a Māori warrior, dancing Tahitian princesses, and a scene showing Cook’s death in Hawaii in 1779.

Te Papa Chief Executive Rick Ellis says New Zealand is very lucky to have had the opportunity to acquire this work.

“This is both a spectacular artwork, and a fascinating record of how the Pacific was seen through European eyes over 200 years ago,” Mr Ellis said.

Extensive conservation work is required on the fragile artwork, and Te Papa hopes to be able to display it by 2019, marking the 250th anniversary of Cook’s arrival in the Pacific.

“It’s the most ambitious transformation of the visual material from Cook’s voyages into a large scale work of art,” says Dr Rice.

“Stories of the exotic, lush Pacific and its people captivated the public in the late 1700s. This two-metre high panoramic wallpaper offered the wealthy a kind of ‘armchair tourism’ intended to transport them to another time and place.”

The wallpaper has also inspired an immersive video installation by contemporary artist Lisa Reihana, in Pursuit of Venus [infected], which will be showcased as part of New Zealand’s entry in the 2017 Venice Biennale.

The original art work was painstakingly created with hundreds of wooden blocks. Smaller details were added using stencils and hand-painting to achieve a remarkably nuanced picture.

Te Papa’s conservators estimate the work could require approximately two years of conservation research and treatment before it is ready to be displayed publicly.

“Years of being in a domestic environment, with open fires, smoking and other pollutants have taken a toll,” says Dr Rice.

Panel 5 (below) This scene presents three Tahitian dancers performing for O-too, the King of Tahiti. The dancer on the right is identified as Poetua, a Tahitian princess that was painted by the artist on Cook’s third voyage, John Webber. This painting is also in Te Papa’s collections. 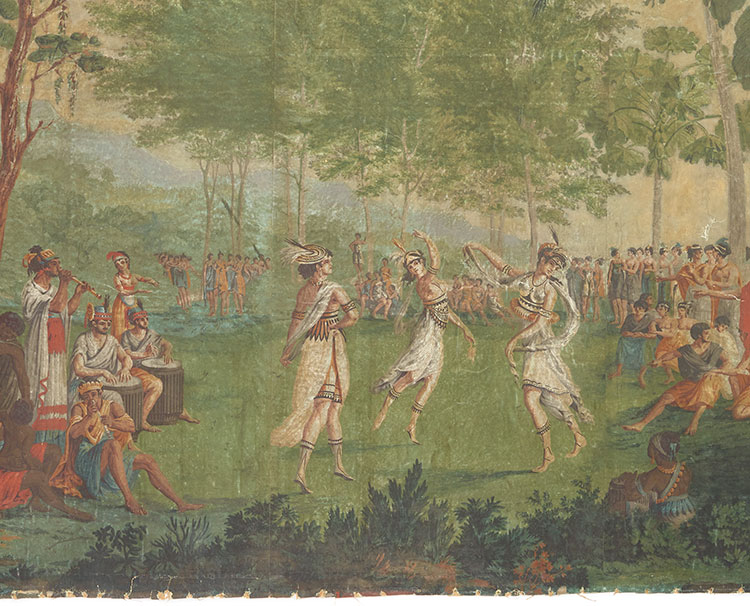 Panel 10 (below) a seated Māori warrior is in the foreground on the right. 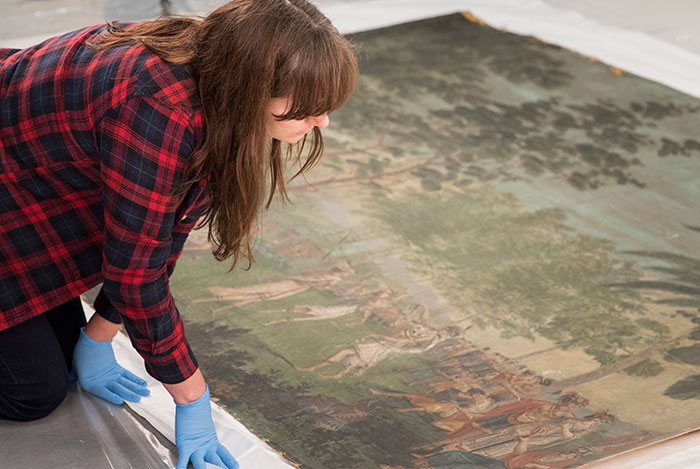 Les Sauvages de la Mer Pacifique is a rare, spectacular, large-scale panoramic wallpaper, printed in colour from woodblocks with colour finishing by hand in Maçon, France in 1804-5. It was one of the first panoramic wallpapers produced by the entrepreneur and innovative wallpaper manufacturer Joseph Dufour after a design by textile and wallpaper designer, Jean-Gabriel Charvet.

A panoramic wallpaper consists of a series of drops that can either be hung individually or joined together to form a panoramic scene in a domestic setting.

Les Sauvages de la Mer Pacifique was popular and was sold throughout Europe and in North America where it adorned the interiors of wealthy individuals’ homes.