A rare bravery medal awarded to New Zealander Frances Parker has been secured by Te Papa in an auction overnight.

The Women’s Social and Political Union Medal for Valour was awarded to the suffrage activist for her courageous role in the campaign for the for the right of women to vote in Scotland. It was successfully purchased by Te Papa for approximately $40,000 from Auction House Dix Noonan Web in London. 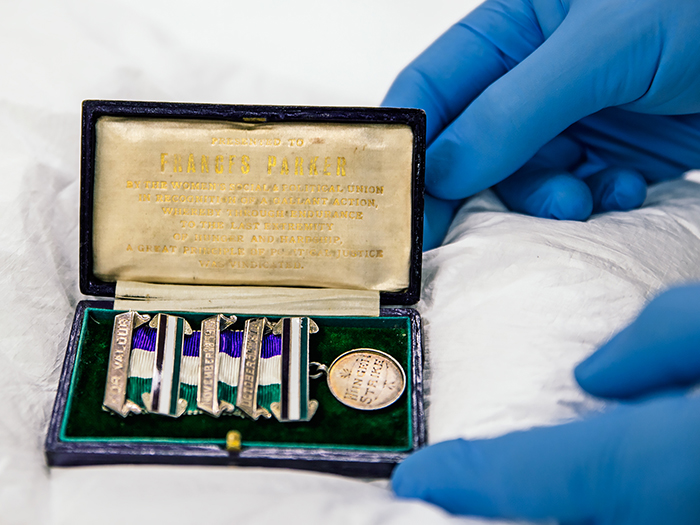 “This bravery medal has an incredibly important story to tell, and is an exciting acquisition for Te Papa,” says Te Papa’s Head of New Zealand and Pacific Cultures Bronwyn Labrum.

“It’s a powerful memento of the ongoing struggle of women around the world for civil rights, and is especially significant for New Zealand as a tangible link to our leading role in that struggle.”

By 1908 she had become involved in the British women’s suffrage movement, eventually becoming a prominent leader of the Women’s Political and Social Union in Scotland.

Imprisoned several times for her role in violent protests and attempts to burn down prominent buildings, including the cottage of Robert Burns – Scotland’s national poet, she went on hunger strike in 1912 and 1914, and was subjected to force-feeding which involved acts of physical abuse and indecent assault.

“This is the only medal of its kind that we know of with any New Zealand connection, we are looking forward to continuing our research into the important leadership role Frances Parker played in one of the most important movements of political and social protest in Britain last century.”

The medal, which is in its original case, is inscribed 'Presented to Frances Parker by the Women's Social and Political Union in Recognition of a Gallant Action, whereby through Endurance to the last Extremity of Hunger and Hardship, a Great Principle of Political Justice was Vindicated'.

Following her death in 1924, Frances Parker left the medal to her friend and co-suffragette Ethel Moorhead. It remained in Ethel Moorhead’s family until it was sold at auction in London on behalf of one of her descendants.

Te Papa is now working to transport the medal to Wellington.