Thousands turned out to celebrate Matariki Rising, a festival that celebrates Matariki, the Māori New Year.

The 10-day festival which ran at Te Papa from June 16 to 25, and at galleries and museums across the Wellington region throughout June and July, featured everything from cooking demonstrations and kapa haka performances to storytelling and academic lectures.

The festival saw more than 5,000 Wellington residents and visitors to the Capital taking part in the festivities.

It launched on Friday, June 16 with a public ritual event that saw a capacity crowd of more than 500 attendees gather under the starry sky in Te Papa’s amphitheatre. There they heard retellings of Māori stories around a fire before dozens came forward to tell their own stories to the gathered crowd followed by lighting tealight candles and letting them float on the lagoon in Te Papa’s amphitheatre.

Matariki Rising Festival Director, Dr Charles Royal, says he was humbled that so many people got involved.

“I was delighted and humbled by the number of people who came to our opening community ritual celebration, especially given it was experimental and the first time we’ve done that.

“However, it seems clear that we as a community need dedicated times such as these to come together and remember the year just past, celebrate one another and our unique place in the world and renew for the next year. I’m looking forward to doing it all again in 2018.”

“Matariki has the potential to be elevated to an event of national identity comparable to the likes of Chinese New Year or Holi in India, Nepal and Sri Lanka. These events are about celebrating who we are and where we are, and reconnecting us with each other and with nature.”

He was pleased with the success of the inaugural festival as the first steps towards elevating Matariki to become a truly New Zealand event of national identity.

“From our moving opening ritual to the overwhelming success of Kaumātua Kapa Haka in the final weekend (capped off by fireworks over the Wellington waterfront), Matariki 2017 was a wonderful success.” 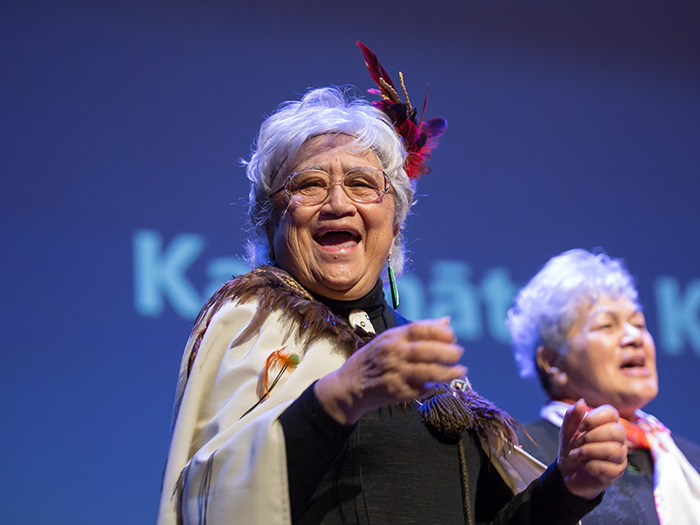 A range of events have been held across the region, with many ongoing throughout July and beyond at The Dowse Art Museum in Hutt City, Expressions Whirinaki Arts & Entertainment Centre in Upper Hutt, Pātaka Art + Museum in Porirua and Mahara Gallery in Waikanae, and Museums Wellington and Space Place in Wellington.

The Dowse Director Courtney Johnston says visitors to the Hutt City museum have enjoyed taking part in the Matariki celebrations, which began with a cooking demonstration from chef Joe McLeod during his Ngā Kai o Matariki event.

“Visitors enjoyed a night of reflection, learning and laughter followed by a delicious meal. Breaking bread with our amazing community on the longest night of the year was an incredibly special experience. We received heartfelt thanks visitors on the night and are delighted to have personal notes of gratitude continue to arrive well after the dishes were done.

“Our new family exhibition He Taonga Te Reo is now open, and we’re looking forward to our July exhibitions featuring weaver/installation artist Maureen Lander and photographer Fiona Clark. Having Maureen with us when we co-host the Star Weave Jam with Māori Women’s Refuge on Saturday 15 July will be a highlight of our ongoing Matariki programme,” she says.

Te Papa acknowledges the financial support received from the Wellington Regional Amenities Fund which has enabled Te Papa to lead the collaboratation with these participating venues to deliver this year’s festival.

The Wellington Regional Amenities Fund continues to support cultural events throughout the region and is financed by the region’s own local government councils.

Find out more about Matariki and the programme of events at matarikirising.com

Heaven and Earth – Pātaka Art + Museum, June 30 – July 1
Based and formed around Matariki, Māori New Year, Heaven and Earth transports its audience to a world beyond. Talented cast members will use black lights along with small and large scale puppets to tell this amazing story. This will be a unique and unforgettable experience for our tamariki.

Matariki Dawn, an installation by Michel Tuffery and Yvonne de Mille – Mahara Gallery, until July 30
Artists Michel Tuffery and Yvonne de Mille are both inspired by the traditional use of Manu Aute and Manu Tukutuku kites during Matariki. Matariki Dawn installation references the excitement of the first sightings of first sightings of the Matariki stars at dawn – the signal that the new year is about to begin.

Maureen Lander: Flat-Pack Whakapapa – The Dowse Art Museum, July 15 – October 29
Just as whakapapa (genealogy) reflects someone’s lineage and biology, the starting line of a kete determines how its patterning and size will develop. In Flat-Pack Whakapapa, Maureen Lander will create three installations that explore the connections between whakapapa and raranga (Māori weaving).

He Taonga Te Reo – The Dowse Art Museum, until October 1
Celebrating 30 years of Māori being one of our official languages, this exhibition recognises te reo Māori as integral to Māori culture and the door to a Māori perspective on the world. Featuring a range of works from The Dowse Collection, the exhibition looks at how language is an expression of identity, beliefs and values; how it defines our way of navigating the world.

The Evolving Universe – Expressions Whirinaki Arts and Entertainment Centre, until August 27 Journey from Earth to beyond our galaxy, travelling back through time and into space in The Evolving Universe. Through breath-taking photographs taken by the largest telescopes in the world, you will enter a world of supernovas, stellar nurseries and nebulae in this exclusive to Upper Hutt exhibition from the Smithsonian, USA.

Images from this year’s Matariki Rising festival via Dropbox