Was this the world’s biggest penguin?

It’s not every day you get to name a giant prehistoric penguin after your mother. But that was the rare privilege enjoyed by Te Papa curator Alan Tennyson, as reported today in the prestigious scientific journal Nature Communications.

With colleagues Paul Scofield and Vanesa De Pietri of Canterbury Museum, and Gerald Mayr of Frankfurt Germany, Tennyson was able to identify the previously unknown species based on fossilised remains found in a boulder in Otago, in New Zealand’s South Island.

The bones found suggest a penguin as tall as a human, at 1.65 metres, and likely to weigh 100kg. The partial skeleton dates back to around 60-55 million years ago, during the late Paleocene of New Zealand.

Alan Tennyson says the discovery was a career highlight.

“This is definitely one of the most exciting fossils that I’ve ever found. When we found it we didn’t know what it was, because it was completely encased in rock. But as soon as the extraction began, we realised that is was the remains of an enormous bird.”

Tennyson found the rock on an Otago beach in 2004, along with co-author Paul Scofield.

“The beach was a known site for bird fossils, but only very fragmentary pieces,” Tennyson says.

“This particular rock showed some bone on the outside surface so I picked it up and brought it back to work. At the time we did not have any hard rock preparators working for us, so the rock sat on a shelf for a few years. In 2015, preparator Al Mannering began working on the extraction.”

“Painstaking extraction work slowly revealed that the rock contained a multitude of jumbled bones of a colossal penguin,” says Tennyson.

“We found flipper, body and leg bones and they are truly huge.”

“It’s difficult to determine exactly what it would have looked like in life, but it would have been very impressive, as tall as many people, and a very solid, muscly animal built to withstand frequent deep dives to catch its prey.”

“It would not have been the kind of bird that someone could catch alive, it would have been considerably more powerful than a person.”

Tennyson says the giant fossil is also much older than those previously known.

“The other startling thing about the new colossal fossil is its ancient age. At 55-60 million years old, it is nearly as old as the earliest penguin ancestors ever found.”

Tennyson says it’s a common myth that penguins only live in very cold environments such as the Antarctic region. Today Galapagos penguins live at the equator and many fossils show that early forms of penguins lived in warm seas. 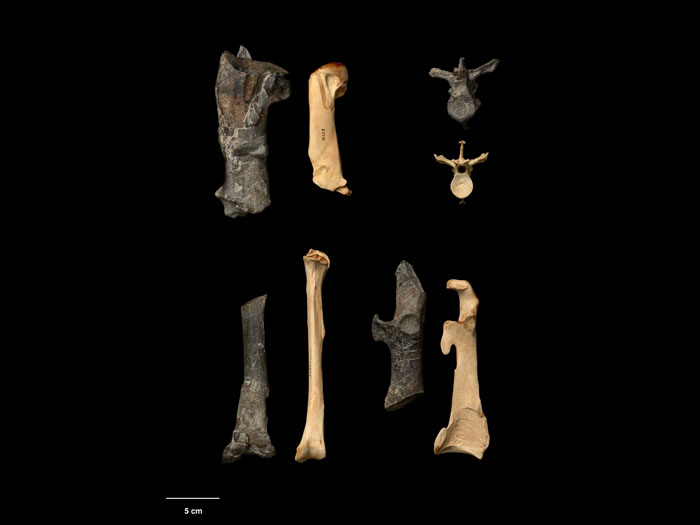