The original pounamu prototype for the Tohu Reo pin was gifted to Te Papa in a ceremony today on the museum’s marae, Rongomaraeroa.

Worn as a lapel pin, the Tohu Reo represents the waha (mouth) of traditional carvings.

Matariki Williams, Curator of Mātauranga Māori at Te Papa, said the pounamu pin would become part of the national collection held in trust by Te Papa for all New Zealanders.

“This is a significant taonga Māori which helps raise the profile of Māori language,” Ms Williams said.

“It draws on our carved histories and the intangible nature of te reo Māori, a language that has seen decline, and is now in the process of revitalisation.”

Ms Williams said that Te Papa’s collections range from ancient objects to those from modern life.

“We are really excited to receive this contemporary taonga into the Te Papa collection as it speaks to the enduring presence of te reo in the lives of New Zealanders,” Ms Williams said.

“The Tohu Reo is a small pin with a big mission: to preserve the language for future generations,” Mr Johnson said.

“Air New Zealand is working to weave Māori culture more deeply into the fabric of our business and we’re honoured a pin first developed for our people has become part of Te Papa’s collection.”

As well as the pin prototype, Air New Zealand gifted items from the design process including prototype drawings, one of the pins worn by cabin crew, and the initial carving by Stacy Gordine of the New Zealand Māori Arts and Crafts Institute (NZMACI).

General Manager of the NZMACI Eraia Kiel, who spoke at today’s ceremony, said the Tohu Reo represents the importance of oral traditions in Māori culture.

“Every person that wears the tohu has a responsibility to do so with pride and purpose, to champion te reo Māori.” 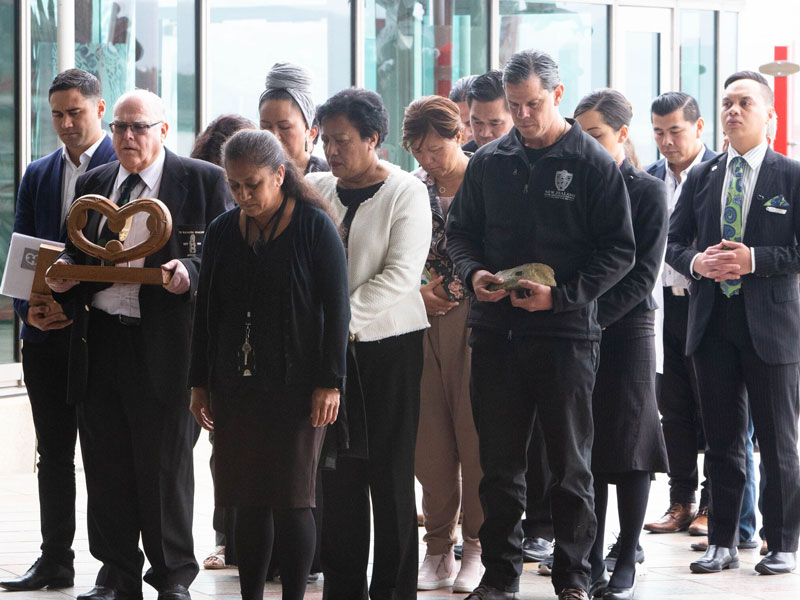 About the Tohu Reo

Now under the guardianship of the Māori Language Commission, the Tohu Reomay be worn by any te reo speaker who passes the necessary fluency testing. Speakers from eight New Zealand organisations, including Air New Zealand, the Department of Conservation, the New Zealand Māori Arts and Crafts Institute, ASB and Auckland Council currently wear the Tohu Reo.

The Tohu Reo was developed by Air New Zealand and the Māori Language Commission and designed in collaboration between Designworks and expert carver Clive Fugill of the globally renowned NZMACI at Te Puia, Rotorua.

The pounamu prototype of the pin, which has been gifted to Te Papa, was carved by Stacy Gordine.