The fossilised remains of a giant burrowing bat that lived in New Zealand millions of years ago have been found.

Te Papa’s Alan Tennyson was part of an international team of scientists from Australia, the UK, and USA who reported the new fossil find in the journal Scientific Reports.

Teeth and bones of the extinct bat were recovered from 19- to 16-million-year-old sediments near the town of St Bathans in Central Otago.

At about three times the size of an average bat, with an estimated weight of 40 grams, the new fossil bat was the biggest burrowing bat yet known. Burrowing (or short-tailed) bats are today only found in New Zealand but they once also lived in Australia. These are peculiar bats because although they fly, they also scurry about on all fours, over the forest floor, under leaf litter, and along tree branches, while foraging for both animal and plant food. 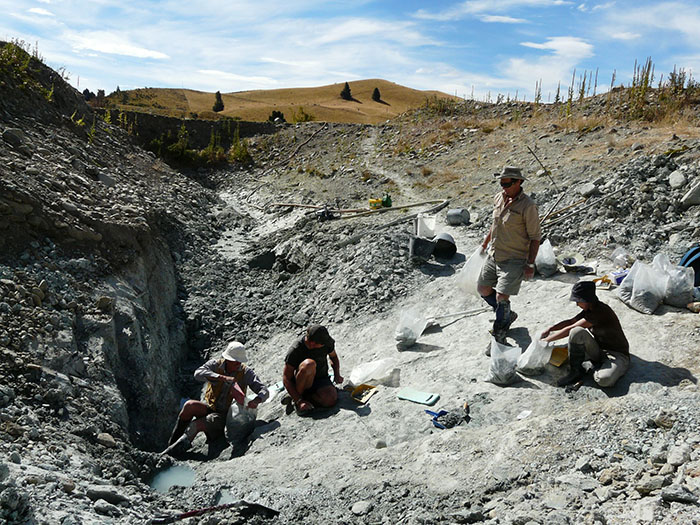 The new bat is named Vulcanops jennyworthyae after Vulcan, the mythological Roman god of fire and volcanoes, in reference to New Zealand’s tectonic nature but also to the historic Vulcan Hotel, centre of the mining town St Bathans, and team member Jenny Worthy who found the bat fossils. Other team members include scientists from UNSW Sydney, University of Salford, Flinders University, Queensland University, Canterbury Museum, the American Museum of Natural History, and Duke University.

Alan Tennyson, Te Papa’s Curator Vertebrates, says: “The St Bathans Fauna has produced many remarkable fossils since we began our excavations there 16 years ago but this weird bat is among the most bizarre of all the fossils that we’ve found. This new bat was a relative of New Zealand’s peculiar short-tailed bats, extinct Australian species, and the Americas’ vampire bats, suggesting that ground-dwelling forms of bat were more common in the past.”

As the first new bat genus to be added to New Zealand’s fauna in more than 150 years, Vulcanops provides new insight into the original diversity of bats in Australasia.

Other extinct animals found at the St Bathans fossil site include tuatara, moa, kiwi, acanthisittid wrens, leiopelmatid frogs, parrots, pigeons, and many water birds, but also land turtles and crocodiles – two groups no longer found in New Zealand. This diverse fauna lived in or around a 5,600-square-km prehistoric subtropical Lake Manuherikia that once covered much of the Maniototo region of the South Island

Probably because of today’s cooler temperatures, just two bat species comprise the entire native land mammal fauna today (a third species became extinct after a rat invasion in the 1960s). All other modern land mammals in New Zealand have been introduced by people within the last 800 years.