Courtney Johnston has been appointed as the new Chief Executive of Te Papa. Ms Johnston will take up the role in December 2019. 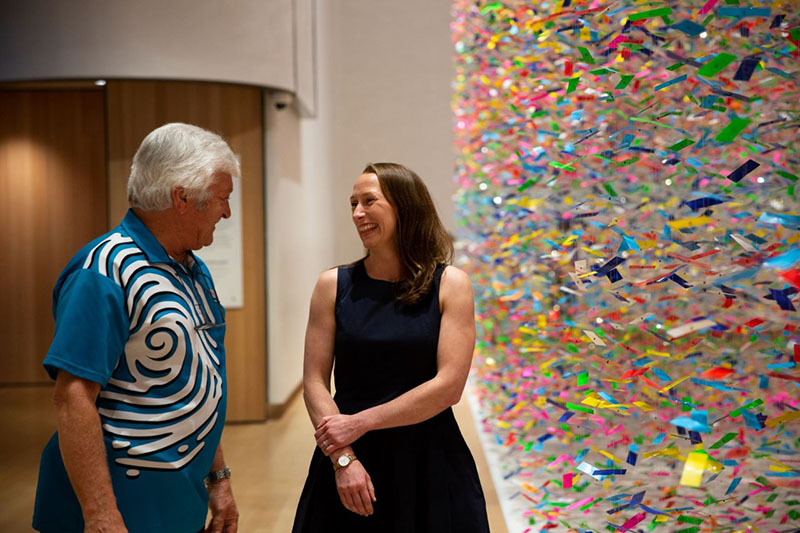 Since its founding, Te Papa has had a dual leadership model, and as Tumu Whakarae | Chief Executive, Johnston will share the leadership of Te Papa with Kaihautū Dr Arapata Hakiwai.

Ms Johnston brings a wealth of experience in leadership roles, including as Director of The Dowse Art Museum and Petone Settlers Museum, and General Manager of Boost New Media. She is the immediate past chair of the umbrella group Museums Aotearoa, and since September 2018 has been Director of Audience and Insight at Te Papa.

Johnston holds a Masters in Art History from Victoria University of Wellington, and was the 2015 recipient of a Winston Churchill Memorial Trust Scholarship to research contemporary museum practice in the United States.

At 40, Johnston is the youngest person to ever lead the national museum and the first woman to be Chief Executive of Te Papa since its founding leader, Dame Cheryll Sotheran.

The Chair of Te Papa’s Board, Dame Fran Wilde, said she was delighted to appoint Ms Johnston from a strong field of candidates from New Zealand and abroad.

“The Chief Executive of Te Papa is one of the most important and inspiring leadership roles in the country,” Dame Fran said.

“In Courtney we have someone with the vision, drive and experience to take Te Papa into an exciting new era.”

Dame Fran said the Board were pleased to appoint a New Zealander to the role.

“As a Board we were seeking someone who understands Aotearoa New Zealand, and is committed to Te Papa’s bicultural kaupapa. Courtney has proven experience in working in a bicultural context, she brings to the table considerable experience in the museum, heritage, and digital sectors and she impressed us with her vision for Te Papa.”

“Te Papa was founded as a radically new concept in museums, to lead the way and challenge conventional thinking,” Dame Fran said. “With Kaihautū Arapata Hakiwai, Courtney Johnston will lead us through an exciting new era for Te Papa, making brave choices and breaking new ground, while caring for the treasures, the communities, and the whānau of Te Papa.”

Courtney Johnston said she was thrilled to take up the role of Tumu Whakarae | Chief Executive.

“Te Papa has always held such an important place in my life, personally and professionally, and it’s a dream come true to co-lead the museum. To ignite its standing as a source of pride for New Zealanders and inspiration for museums everywhere is something I have aspired to since setting out on my museum career,” Ms Johnston said.

“Working at Te Papa as a visitor host when I was studying at university, I saw the original co-leadership relationship formed by Cheryll Sotheran and Cliff Whiting. It has always sat at the heart of Te Papa as a bicultural museum, and it’s a privilege for me to be able to carry this kaupapa into the future with Arapata.

“In my time at Te Papa I have gained a new appreciation for the depth and breadth of talent in the team – right across the museum from science researchers to pastry chefs, we have an incredible bunch of people who are doing amazing work.

“With the recent successes of Te Taiao Nature and Toi Art, this is such an exciting time to be moving into this role. Te Papa is poised to move into the 2020s with the courage and innovation that have always set us apart as a national museum.”

Courtney Johnston was born in 1979 and raised on a dairy farm in Taranaki. She started her career in museums as a visitor host at Te Papa, while studying at Victoria University of Wellington.

Johnston has lived and worked in Wellington since, with roles at a variety of galleries and cultural institutions, including the Adam Art Gallery, City Gallery Wellington, and as director of the Dowse Art Museum in Lower Hutt, and the Petone Settlers Museum. She also has a strong digital background. During five years at the National Library she was part of the ground-breaking DigitalNZ project to open up New Zealand cultural heritage.

Johnston is a writer and commentator on New Zealand art and digital trends, including being the visual arts correspondent for RNZ’s Nine to Noon programme since 2010. She is the Chair of the Pantograph Punch, and a board member of Arts Wellington and the Wellington Performing Arts Trust. She is a previous board member of the National Digital Forum and Tohatoha (Creative Commons Aotearoa New Zealand), and was a member of MBIE’s Tourism Growth Partnership Fund Independent Expert Panel.