The exhibition, made by the Australian Centre for the Moving Image (ACMI), premiered in Melbourne in 2018 and attracted 179,000 visitors. Singapore’s ArtScience Museum hosted Wonderland this year, with 138,000 visitors.

The exhibition celebrates the screen history of English author Lewis Carroll’s timeless stories — Alice’s Adventures in Wonderland (1865),  Through the Looking Glass, and What Alice Found There (1871) — in an experiential exhibition.

Visitors to Wonderland can lose themselves in the Hallway of Doors, play at the Queen’s Croquet Ground and take part in a magical Mad Hatter’s Tea Party. 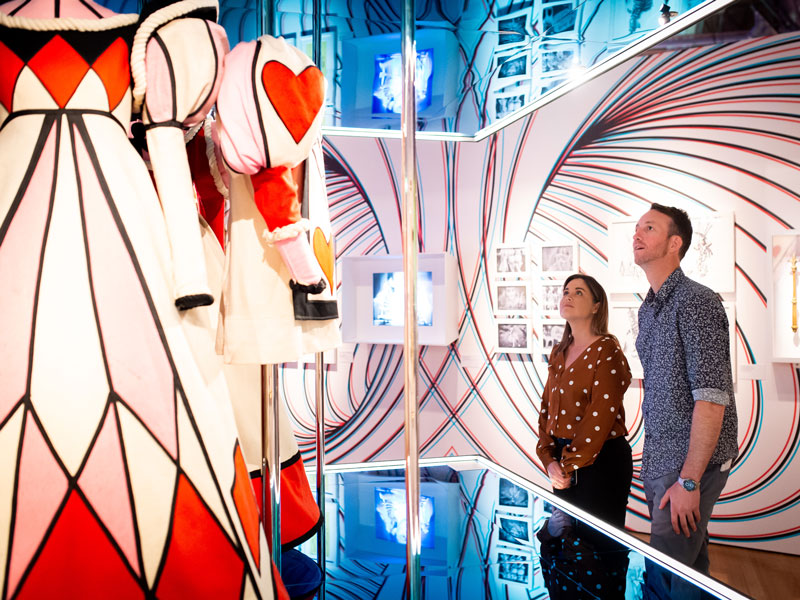 Visitors with gowns from the 1966 NBC television musical production Alice Through the Looking Glass. Te Papa

Former Aucklander Malia Reinders' and her Mother Sieva Jackson visited the exhibition in Singapore where they have been living for three years. Wonderland had such an impact on Malia, aged 7, that she immediately wanted to do it again once she came out, ranking it "100,000" out of five.

The Guardian wrote that Wonderland “intends to be as fantastical as the original text, with creative and immersive rooms that house more than 300 objects from collections and studios around the world. There are drawers to open, things to touch, props to put your head inside and the Queen’s Croquet Ground melds technology with craft, letting visitors (and their children) insert themselves into the scene.”

New Zealand Herald writer Melissa Nightingale travelled to Singapore to experience Wonderland. “The exhibition is magic from the beginning. Even for children that haven't grown up with the movies and books, Wonderland has something for all ages,” she wrote.

Exhibition experiences include Down the Rabbit Hole which transports visitors from the real world, into Wonderland. The Hallway of Doors introduces Lewis Carroll, Alice Liddell and the key Wonderland characters, objects and places. Visitors are invited to take a seat at the digital and interactive experience Mad Hatter’s Tea Party. A multiple screen audio visual room showcases Alice from different times, cultures and media.

Ms Gibson says Carroll’s tales have been the subject of more than 40 films and over 30 television programs.

“The exhibition will take visitors on Alice’s journey through popular culture, demonstrating how artists, filmmakers, and fans have returned to her story with the help of screen technologies for more than a century,” says Ms Gibson.

Wonderland was conceived and created by curators Jessica Bram and Sarah Tutton at the Australian Centre for the Moving Image (ACMI) in Melbourne, and was designed by exhibition and theatrical designer Anna Tregloan.

From the first screen adaptation by Cecil M Hepworth in 1903 to Disney’s Alice Through the Looking Glass (2016), Wonderland reveals the development of special effects from pre-cinematic entertainment to silent film, animation to puppetry, live-action cinema, videogames, CGI, 3D and beyond. Among the films featured; Norman Z McLeod’s 1933 version featuring a young Cary Grant; Lou Bunin’s Alice Au Pays des Merveilles (1949) which almost did not make it to the screen; Jan Svankmajer’s acclaimed Alice (1988); the Quay Brothers’ experimental Alice in Not So Wonderland (2007); and television versions by the BBC and NBC, and much more.

Made in Melbourne by ACMI, this exhibition offers a theatrical experience complete with playful environments and bespoke digital activities that draw upon the wonder and curiosity of Carroll’s stories.

The exhibition at Te Papa illustrates an ongoing fascination with new visual technologies over more than a century. From the earliest optical toys to silent film, animation, puppetry, live-action cinema, videogames, CGI, 3D and beyond, Wonderland explores how the moving image has kept Alice and her stories in the public consciousness, reinvented in contemporary contexts and mediums.

Wonderland premiered in Melbourne in 2018 and attracted 179,000 visitors in 6 months. The exhibition has recently exhibited at the ArtScience Museum in Singapore.

Buy tickets and read more about Wonderland at Te Papa

Friends of Te Papa: Wonderland Wednesdays
5, 12, 19, 26 Feb
Talks on animation, feminism, language, and mental health through the lens of Alice in Wonderland