The painting has been held in a private collection in England for over 200 years and was purchased for $685,000.

The 420mm x 570mm work is by William Hodges, an English painter employed as a draughtsman on Captain Cook’s second voyage to the Pacific aboard the Resolution from 1772-75. Hodges was the most important British artist to visit New Zealand in the 18th century.

The painting depicts a quietly majestic scene in Tamatea | Dusky Sound: a waterfall cascades through native bush into the green depths of the water and mountains recede into the distance; Southern Māori are seated in a waka, holding large hoe or paddles.

Curator Historical New Zealand Art, Dr Rebecca Rice, says this work is the earliest painting of a New Zealand subject in Te Papa’s collections, and is of national significance.

“This magnificent work by Hodges references the first meaningful encounter between Europeans and Southern Māori – an important moment in the history of Aotearoa New Zealand,” she says.

“The presence of the waka and Māori figures elevates the painting beyond a mere landscape; it enriches the potential of the painting, enabling it to speak to the interactions between Māori and Europeans during Cook’s visit.”

Te Papa Head of Mātauranga Māori Puawai Cairns says the painting enables reflections on this encounter to be explored through taonga.

“It is an interesting image that reflects the early European imagination idealising the meeting between Cook, his crew, the indigenous people of Aotearoa, and the whenua,” she says.

“It is part of a conversation about contesting memories and how we want to truthfully discuss the arrival of Cook.”

The painting will be displayed at Te Papa in late 2019, as part of the national commemoration, Tuia – Encounters 250. This will be the first time the painting has been on public view in New Zealand since it was made over 240 years ago.

Te Rūnanga o Ngāi Tahu Kaiwhakahaere Lisa Tumahai says it is appropriate that this painting has been returned home.

“This is one of the earliest artistic depictions by Pākehā of our tīpuna from southern Te Waipounamu,” she says.

“The encounter between Cook’s crew and the southern Māori families at Tamatea | Dusky Sound in 1773 was amicable. The portrayal of our tīpuna in this painting will be of interest to Ngāi Tahu whānui, and particularly to those with whakapapa to the deep south.”

The acquisition of this painting has been partially funded by the Lottery Grants Board from the Tuia – Encounters 250 fund with the support of Te Runanga o Ngāi Tahu. 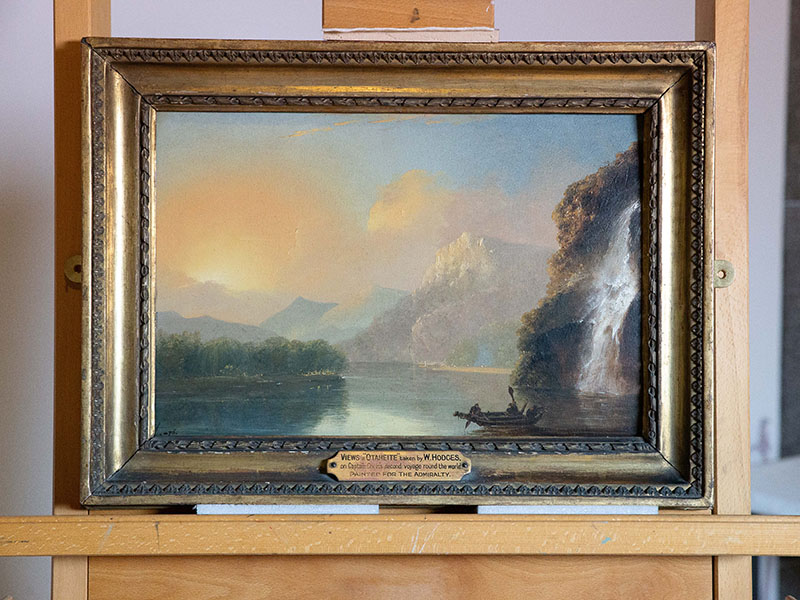 William Hodges, Waterfall in Dusky Bay with Maori canoe, 1775, oil on panel. Purchased 2019 with partial funding by the Lottery Grants Board from the Tuia – Encounters 250 fund. Te Papa

Images of the painting behind the scenes, being examined by Te Papa staff, can be downloaded here

The most important British artist to visit New Zealand in the 18th century, Hodges was an English painter who trained under leading British landscape painter Richard Wilson. He emerged from his training as an important member of a younger generation of British painters.

In 1787, Hodges was elected as a member of London’s prestigious Royal Academy, a professional body established in 1768 for the promotion and exhibition of art.

Hodges’ career was marked by two major voyages. The first was his appointment as draughtsman on board Cook’s second voyage to the Pacific aboard the Resolution from 1772-75. His second was to India from 1780-83. Both voyages were intimately connected to the rise of the British Empire.

As artist on board the Resolution, Hodges was charged with making drawings and paintings of the places and peoples encountered during Cook’s second voyage, based on Cook’s firm belief that pictures offered ‘a more perfect idea thereof than could be formed by written descriptions only’. Consequently, Hodges was the first professional artist to extensively picture non-European lands and peoples in the Pacific and Asia during a period of imperial expansion.

In 2019, Aotearoa New Zealand will acknowledge 250 years since the first onshore meetings between Māori and Europeans with a national commemoration called Tuia – Encounters 250 (Tuia 250).

Tuia 250 will encourage honest kōrero | conversations within communities about Māori and European settlement of New Zealand.

Tuia 250 will recognise the extraordinary voyaging traditions and cultures of Te Moananui a Kiwa (the Pacific), the exceptional feats of Pacific voyagers, their mātauranga (knowledge), innovation and non-instrument navigation prowess and their decision to settle in Aotearoa many generations ago.

Tuia 250 will also acknowledge the feats of European explorers, the technology they developed, and their first encounters with the people of this place when James Cook, Tupaia, and others on the Endeavour arrived and sailed around Aotearoa in 1769.