Te Papa announced today that its ground-breaking exhibition Gallipoli: The scale of our war will remain at the museum for at least three more years, and will not close before Anzac Day, 25 Apr 2022.

Originally scheduled to close in 2019, the free exhibition is still proving a huge drawcard for visitors, with more than 2.5 million people having seen it to date.

The exhibition, created by Te Papa working closely with Weta Workshop, is the most-visited exhibition in New Zealand’s history, and has set a global benchmark for immersive museum experiences.

Te Papa Board Chair Evan Williams said the extension would give as many New Zealanders as possible a chance to experience it for themselves.

“From when it first opened we have seen the exhibition have a profound effect on New Zealanders. It fosters empathy, inspires reflection, and is the starting point for powerful conversations,” he said.

Mr Williams said the decision to extend the exhibition had been made earlier this year, as a result of ongoing demand from the public.

“We made the decision to extend Gallipoli before the attacks in Christchurch, but in the wake of those acts of terrorism, its focus on the human cost of violence is more relevant than ever,” he said.

“This is the kind of storytelling that connects us to our history, and to each other, and helps us recognise our shared humanity over the span of different times, and different cultures.”

Turkish Ambassador to New Zealand His Excellency Mr Ahmet Ergin said the exhibition had provided an opportunity to recognise the close ties that had grown between the countries since the tragedy of Gallipoli.

“As the proud hosts of Anzac Day services every year we are delighted to hear that this masterfully curated exhibition has been extended for more people to reflect upon our shared sacrifice and most treasured relationship,” he said.

“We share a unique bond of friendship built in the wake of a tragic conflict. Gallipoli marks the turning point in our history as we rebuilt our national identity out of the embers of that war. It is incumbent on us all to cherish the memories of our grandfathers who made the ultimate sacrifice, and of their loved ones left behind.”

Weta Workshop creative director Sir Richard Taylor was one of the driving forces behind the exhibition.

“Working on this exhibition has been a profoundly personal journey for me, and for the Weta Workshop team.

“We wanted to go beyond the sheer scale of the numbers and statistics, and tell very personal stories, to really connect visitors to the human experience,” he said.

“The comments we receive every day from visitors tell us that the exhibition is achieving that more powerfully than we could have hoped for.

“Many visitors express gratitude and connection with the individuals whose stories we tell, and many respond with explicitly anti-war sentiments.” 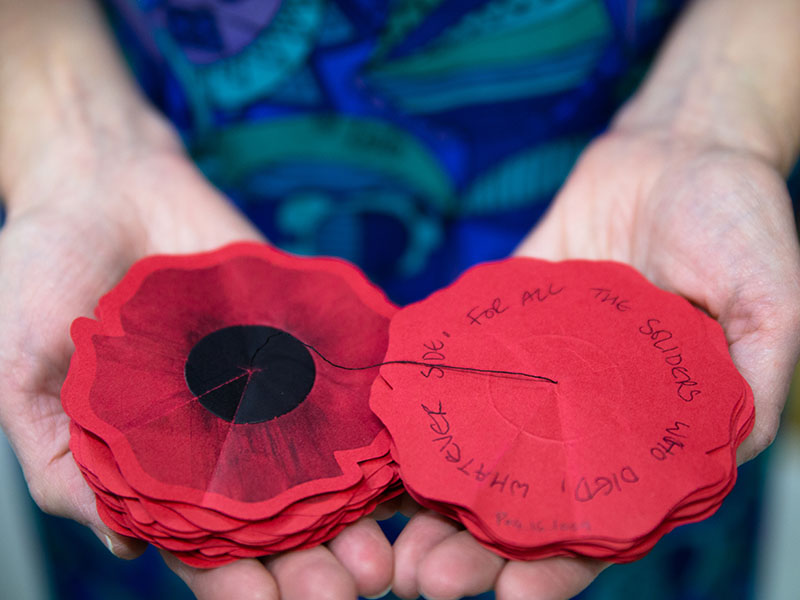 A poppy left by a visitor to Gallipoli: The scale of our war which reads: “For all the soldiers who died, whatever side.” Photo by Jack Fisher. Te Papa

The message of a million poppies

At the end of the exhibition, visitors have the opportunity to leave a poppy with a message on it. Te Papa estimates over a million poppies have been left by visitors to date.

A sample of 3,000 poppies was analysed by researcher Nicola Caldwell and categorised according to the sentiments expressed. The results show a number of common themes.

70% of the messages were commemorative in nature.

13% of the messages were addressed directly to soldiers, including thanks for their service.

19% of the messages expressed gratitude.

Around 8% directly expressed emotion, while many more used emoticons.

Captions below. Please credit all photos with photographer’s name and Te Papa.