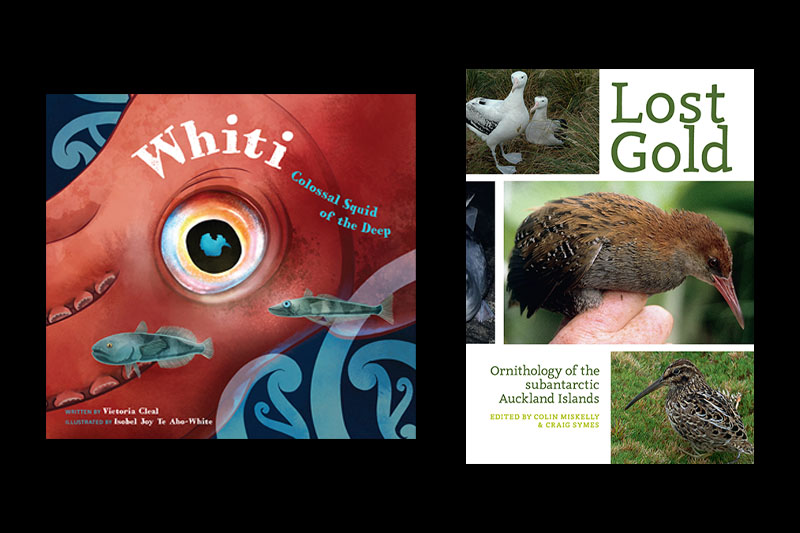 The first ever book to examine the ornithology of the subantarctic Auckland Islands and an illustrated children’s book that dives into the mysterious world of Te Papa’s most popular science exhibit have won Te Papa Press authors and their collaborators accolades from the prestigious Whitley Awards for zoological literature.

Presented annually by the Royal Zoological Society of NSW, the Whitley Awards recognise excellence in publications profiling the unique wildlife of the Australasian region. Because of Covid-19 the awards, which celebrate their 50th anniversary in 2021, could not be presented in-person this year and so the announcement was made this week via the Society’s website and social media.

Lost Gold: Ornithology of the subantarctic Auckland Islands, published in 2020 in collaboration with Birds New Zealand, has won the Science and Conservation category. The special book-format issue of Birds New Zealand’s journal Notornis is edited by ornithologist and Curator Vertebrates at Te Papa Colin Miskelly and Notornis editor Craig Symes. Its 19 chapters are written by leading ornithologists in their fields.

Whiti: Colossal Squid of the Deep, written by Te Papa editor Victoria Cleal and illustrated by graphic artist Isobel Joy Te Aho-White, has been recognised as Best Children’s Book in the awards. It weaves together scientific inquiry with mātauranga Māori to tell the life story of the world’s biggest invertebrate. The author and illustrator worked closely with scientists from Te Papa, as well as NIWA and AUT, to develop the book.

Courtney Johnston, Tumu Whakarae | Chief Executive of the Museum of New Zealand Te Papa Tongarewa says Te Papa is very proud to have these important and collaborative works recognised by the Royal Zoological Society of NSW.

“Congratulations to the authors, illustrators and contributors. Both of these unique books are great examples of the work that Te Papa does every day in partnership with other experts outside the museum,” she says.

The Whitley Awards are named for Gilbert Whitley, an eminent ichthyologist and former Curator of Fishes at the Australian Museum. He authored over 500 publications describing a range of aquatic fauna from sharks to seahorses and was the editor of RZS publications for many years. Whitley Certificates of Commendation are awarded to outstanding publications in a range of categories including natural history, children’s books, magazines, field guides, and technical works for professional zoologists. The overall Whitley Medal is regarded as Australia’s highest award for zoological publishing.

About the editors, author, and illustrator

Dr Colin Miskelly is an ornithologist with broad interests, including conservation ecology, biogeography, and the history of science. Employed as a curator of vertebrates at Te Papa since 2010, Colin previously worked as a scientist and manager for the New Zealand Department of Conservation. His research on snipe and seabirds first took him to the subantarctic region in 1982, and has led to an ongoing interest in these remote islands and their spectacular wildlife.

Victoria Cleal has been a writer and editor at Te Papa for five years, most recently working on the Nature | Te Taiao exhibition and several stories for the children’s TV series He Paki Taonga i a Māui and its associated book, also published by Te Papa Press.

Isobel Joy Te Aho-White (Ngāti Kahungungu ki te Wairoa, Rongomaiwahine, Ngāi Tahu, Ngāti Irakehu) is a graphic artist with a diploma in Visual Arts (UCOL) and a Bachelor of Design (Hons) majoring in illustration from Massey University. She illustrated several of the stories for the children’s TV series He Paki Taonga i a Māui and its associated book.

Issued on behalf of Te Papa Press by: