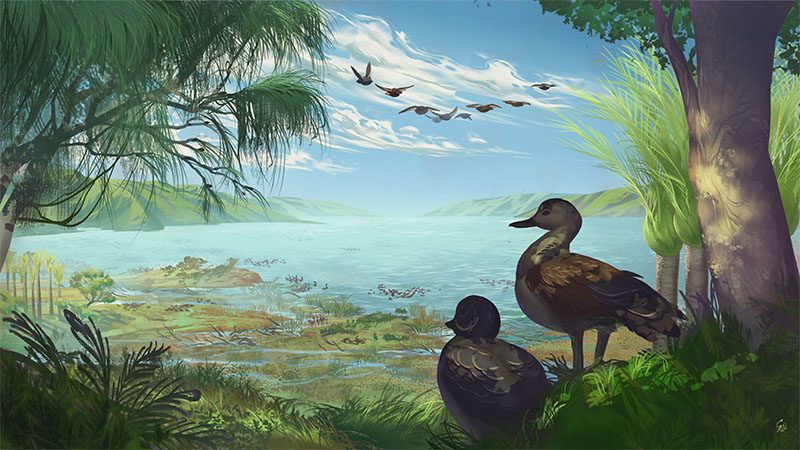 St Bathans miotadorna, 2022. Illustration by and courtesy of Simone Giovanardi

One of the richest fossil sites in New Zealand has revealed a new species of large, extinct, duck.

Researchers have been working at St Bathans for more than 20 years, uncovering animals which lived millions of years ago. The collaborative team that made the new discovery includes researchers from the University of Otago’s departments of Zoology, Anatomy and Geology, Museum of New Zealand Te Papa Tongarewa, and Massey University.

Dr Nic Rawlence, of Otago’s Department of Zoology, says researchers have, so far, found the tūpuna of today’s kiwi and tuatara but also some more exotic species like relatives of flamingos and crocodiles. All of them once lived in or around a gigantic palaeo-lake named Lake Manuherikia.

“The St Bathans fauna is about 15 to 19 million years old and opens a window into a Miocene wonderland that until recently we knew relatively little about.”

The latest find, published in the international journal Taxonomy, highlights the story of Catriona’s shelduck. This new species, based on a large wing bone found in an eroding creek bank, would have looked similar to today’s paradise shelduck, only bigger – about 70cm tall and weighing 2kg.

Alan Tennyson, Te Papa’s Curator of Vertebrates, says “it is one of the richest faunas of fossil ducks in the world”.

“Catriona’s shelduck is the largest of all the ducks discovered here.”

He believes that the duck probably died out because of the dramatic tectonic and climatic changes which later affected the area and eventually caused the disappearance of the lake. Or perhaps it evolved into a modern species and its descendants are still with us.

“The discovery further underscores the global importance of St Bathans fossils for understanding the evolution of ducks and their relatives,” he says.

An extra special part of the discovery for Dr Rawlence was the opportunity to name the species after his late mother.

“My mum inspired my love of natural history. I grew up in Nelson and Golden Bay surrounded by caves full of moa bones. Mum loved hearing stories of my outdoor adventures, wanting full reports on what had been found – she would have been excited by this discovery,” he says.