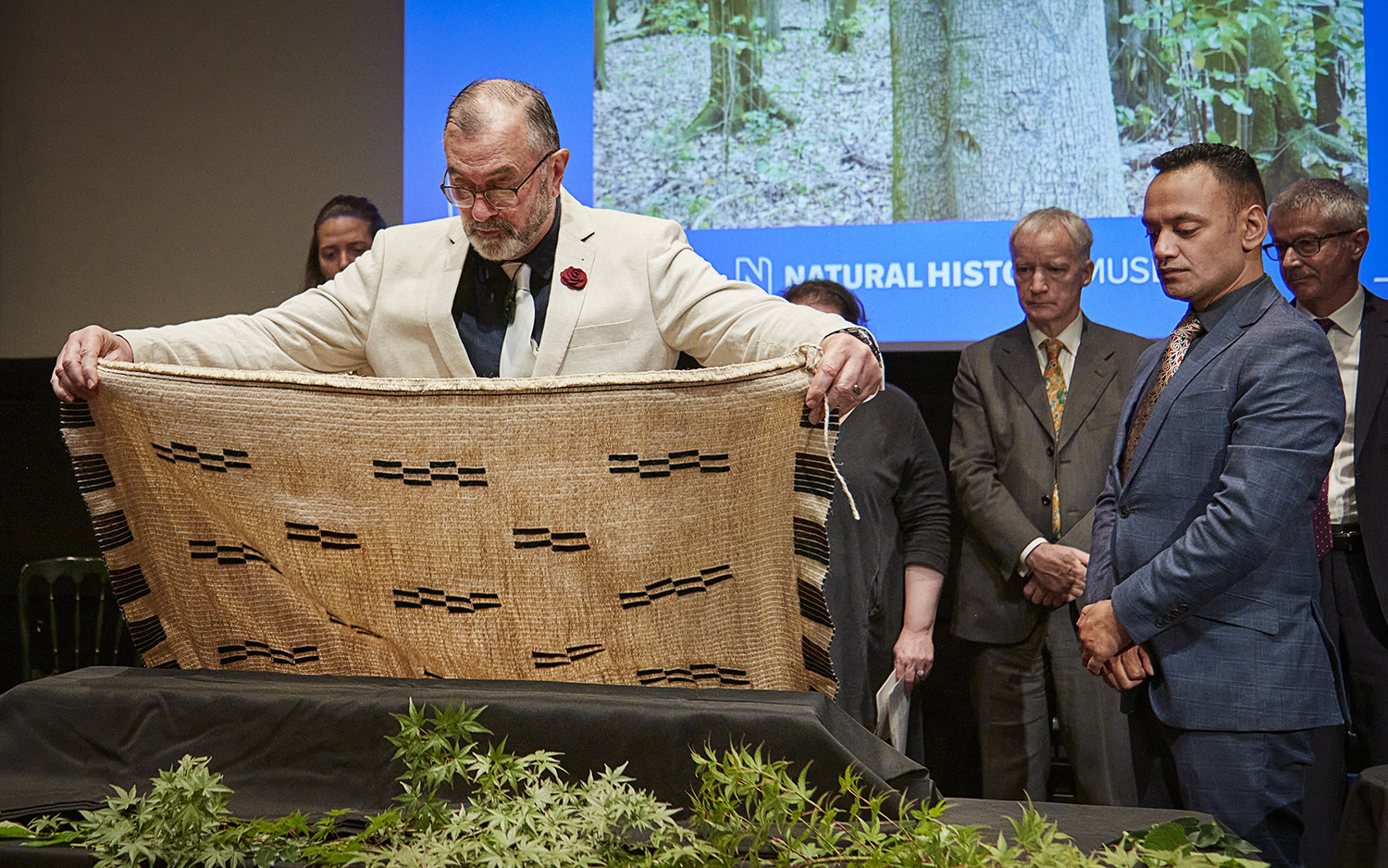 Maui Solomon covers some of the ancestral remains with a cloak of Moriori design © The Trustees of The Natural History Museum, London

This is the largest-ever return of ancestors belonging to a single imi (iwi, tribe). It coincides with the opening of a refreshed display of Moriori taonga (treasures) at Te Papa.

Returning from London’s Natural History Museum, the remains include skulls, mandibles, other parts of the body and a small number of complete skeletons, which were taken from Rēkohu (Chatham Islands) for collection, trade and research.

On Friday 8 July, the Museum of New Zealand Te Papa Tongarewa will hold a hokomaurahiri (repatriation ceremony) to mark the return of these ancestors. Media can attend and film the ceremony but need to register in advance: RSVP to heather.byrne@tepapa.govt.nz.

“This historic repatriation is the first from the Natural History Museum, London. We acknowledge those at the Museum who have been assisting with this repatriation for many years and treated our discussions with sensitivity and care.”

“We also acknowledge the contribution of the New Zealand institutions whose collaborative approach has enabled this to be the largest coordinated return of ancestral human remains in our country’s history.”

“We hope this momentous repatriation encourages other institutions around the world to follow suit,” Dr Hakiwai said.

This significant repatriation is a culmination of 15 years of research and negotiation by the Moriori people and the Karanga Aotearoa Repatriation Programme.

“This demonstrates the Natural History Museum’s respect for Moriori culture, and their willingness to right past wrongdoings and return Kōimi T’chakat Moriori home.”

Mr Solomon also acknowledged Te Papa for its work with the imi (tribe).

“Te Papa was the first New Zealand institution to recognise Moriori, and that has been very important to us.”

“This repatriation is another chapter in a long relationship between Te Papa and the Moriori people,” Mr Solomon said.

The ancestors will join hundreds of others to eventually be returned to their homeland, Rēkohu (Chatham Islands).

Director of The Natural History Museum, London, Dr Doug Gurr said the repatriation was an important moment for the institution.

“Respect and responsibility towards the remains of the deceased are important for us all, and we understand the importance of the return of the Ancestors to the care of their communities as part of a process of healing and reconciliation. Me rongo,” Dr Gurr said.

The Natural History Museum’s formal handover ceremony took place in London last week, and included tikane Moriori and Tikanga Māori (indigenous cultural customs and protocols). Members of Hokotehi and the Karanga Aotearoa Repatriation Programme were in attendance and took part in a lecture and discussion about insights into Moriori culture and repatriation provenance research.

Background on the repatriation

This repatriation is part of a national return of Moriori ancestral remains from institutions around the motu. Otago University, Tūhura Otago Museum, Canterbury Museum, Whanganui Regional Museum and Auckland War Memorial Museum have all worked closely with the Hokotehi Moriori Trust and Karanga Aotearoa to coordinate the repatriation. Since March 2022, Karanga Aotearoa has received close to 200 karāpuna from these institutions, all of which are now in the care of Te Papa.

After the hokomaurāhiri, a special reconciliation ceremony (Te Ara a Nunuku – Tatau Pounamu Reconciliation Ceremony) will be hosted on Rongomaraeroa (the marae of Te Papa Tongarewa), and these institutions, including Te Papa, will provide speeches which highlight the importance of repatriation and reconciliation. Moriori representatives will complete the ceremony with their response.

About the refreshed Moriori display

The repatriation coincides with the refreshed Moriori display as part of Te Papa’s Mana Whenua exhibition. Dougal Austin, Senior Curator Matauranga Maori worked closely and collaboratively with Moriori to update and revitalise the display which showcases the distinctive culture and history founded in isolation on Rēkohu (Chatham Islands).

Austin says, “Kotahitanga (inclusiveness) remains a guiding principle for how we curate Mana Whenua, so we’re acutely aware of the importance of representing Moriori.”

About the Natural History Museum, London

The Natural History Museum is both a world-leading science research centre and the most-visited indoor attraction in the UK in 2021. With a vision of a future in which both people and the planet thrive, it is uniquely positioned to be a powerful champion for balancing humanity’s needs with those of the natural world.

It is custodian of one of the world’s most important scientific collections comprising over 80 million specimens accessed by researchers from all over the world both in person and via over 30 billion digital data downloads to date. The Museum’s 300 scientists are finding solutions to the planetary emergency from biodiversity loss through to the sustainable extraction of natural resources.

The Museum uses its global reach and influence to meet its mission to create advocates for the planet - to inform, inspire and empower everyone to make a difference for nature. It welcomes millions of visitors through its doors each year, the website had 17 million visits in the last year and its touring exhibitions have been seen by around 20 million people in the last 10 years.

Media wishing to attend the ceremony must register their attendance in advance: email heather.byrne@tepapa.govt.nz. Media must arrive by 7.15am Fri 8 July and must not film/photograph or show images of the remains. Interviews can take place after the ceremony at 9.30am. Spokespeople available on the day for interview:

Photos from the hokomaurahiri (repatriation ceremony) will be available on request after the ceremony.

Hokotehi Moriori Trust is the organisation that represents Moriori people – the descendants of Rongomaiwhenua and Rongomaitere on the islands of Rēkohu and Rangihaute (Chatham Islands), in New Zealand and elsewhere.

Hokotehi has been working alongside Karanga Aotearoa since its inception in 2004, seeing the return of over 400 Moriori human remains to date. Moriori skeletal remains (kōimi tchakat and kōimi tinani) were taken from their island home in their hundreds – for trade, exchange, sale and as curiosities. Large-scale collecting on the island began in the mid-1860s with many karāpuna leaving their homeland destined for museums and private collections in New Zealand and around the world. The kōimi were taken in such large numbers that we believe they may represent the most collected people in the Pacific.

Information about the image: At The Natural History Museum, London, Maui Solomon covers some of the ancestral remains with Kopiriango (the evening star) – a kakahu (cloak) woven by artist David Grace and incorporating traditional Moriori design motifs inspired by the maro at Te Papa and a kakahu worn by Moriori leader, Te Rangitapua, as seen in a photograph (also at Te Papa) taken in 1870.