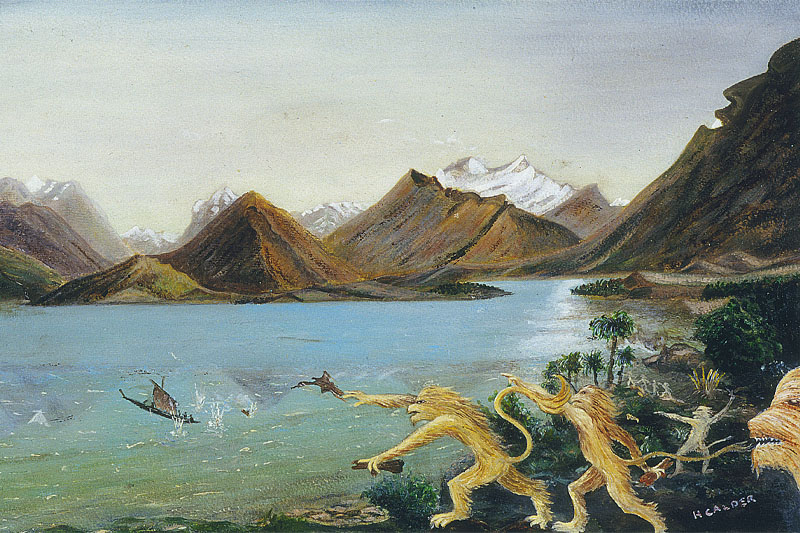 A new exhibition opening at Te Papa on Saturday 8 October explores how artists past and present have expressed their relationships with the land in Aotearoa.

“There is no such thing as a ‘simple, realistic’ picture of land – beneath the surface of the most traditional painting is a hidden drama of power and politics.

“Who desires this land? Who is connected to it? What is missing from the picture?

“By placing historical works from the collection alongside contemporary artworks, we raise those questions and gain fresh new insights into our landscapes and ourselves.”

The collection of historical landscapes covers the length of Aotearoa, from Kororāreka in the far north to Tamatea in Fiordland.

Included is Te Papa’s oldest landscape painting of Aotearoa, William Hodges’ Waterfall in Dusky Bay with Maori canoe [sic], painted in 1776. It is on display for the second time since it was purchased in 2019.

It takes its title from a triptych of photographic prints by Shane Cotton. The series Hiahia – meaning to want or desire – depicts a mountain, both nearby and receding, photographed from the window of a moving car.

Megan Tamati-Quennell, curator of modern and contemporary Māori and indigenous art, says the contemporary works complicate the image of Aotearoa found in the colonial landscapes.

“There are many ways to think about land – its value, its ownership, and how it was lost, sold or stolen,” she says.

“During the colonial period we often speak of Europeans as ‘settling’ the land. These contemporary works ‘unsettle’ the landscape revealing complexity and conflict below the surface.

“For example Wayne Youle’s What Do You Say Savages is a series of prints listing items such as 100 red blankets, 120 muskets, 20 dozen red handkerchiefs – symbolic of land deals throughout the country.

“Tony de Lautour ‘restores’ amateur 19th-century paintings found in garage sales and junk shops, populating them with watchful beasts, surfacing both a humorous critique and a hidden sense of menace.”

The most recent work is the 2020 painting by Emily Karaka, Nga Tapuwae o Mataoho, which was inspired by the occupation of Ihumātao.

“Her painting expresses the whakapapa of Ihumātao, the history between Māori and the Crown, and the complex political landscape in contemporary Aotearoa,” Ms Quennell says.

The 24 artworks will be on display until mid-2023 when a new hang will bring additional works into the exhibition.

The opening of Hiahia Whenua | Landscape and Desire is the first in a series of new art exhibitions opening at Te Papa in the coming months, marking the first complete refresh of Te Papa’s Toi Art gallery since it opened.

Over 2.1 million people have visited Toi Art since it opened in 2018.

Entry to Te Papa, Toi Art, and this exhibition is free.

Images for download of the following works, captions included in link

Images are supplied for the purposes of non-commercial use for media coverage of the exhibition Hiahia Whenua | Landscape and Desire. Media may not crop, alter, or edit the images in any way without Te Papa’s prior permission. The content must be fully attributed as per the provided credit line(s). If you wish to use the images again in future, please come back to Te Papa to seek further permissions on a case-by-case basis. Third party permissions and licensing fees may apply in future.

Full list of works in Hiahia Whenua | Landscape and Desire