By this weekend 50,000 people will have visited Brickman: Wonders of the World in the 35 days since opening at Te Papa. 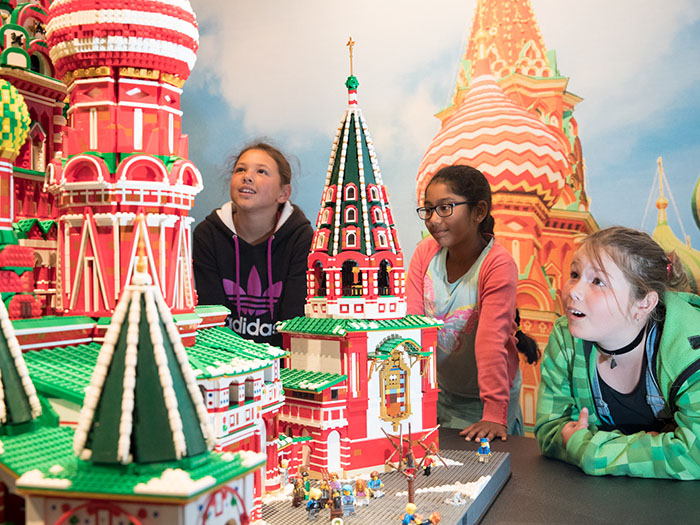 Looking at the Kremlin made from LEGO, 2017. Photo by Kate Whitley. Te Papa

The exhibition, which is only on until 11 February, showcases 50 of the world’s most iconic landmarks and masterpieces made exclusively from LEGO bricks by Ryan McNaught, one of only 14 LEGO Certified Professionals in the world.

Geraint Martin, Te Papa’s Chief Executive, said Ryan McNaught’s LEGO creations had huge appeal. “It’s been fantastic seeing kids of all ages enjoying the magic of LEGO. There is an audible ‘wow’ as people enter the space and come face to knee with Michelangelo’s Statue of David, and see Saint Basil’s Cathedral from Moscow’s Red Square.”

“It’s well on its way to being one of our most popular summer exhibitions – right on par with last year’s Bug Lab.”

The interactive building stations have been a huge hit. Te Papa Host Supervisor Melissa Wells says: “People have been loving building their own pyramids, leaning towers of Pisa, and coral for the Great Barrier Reef inspired by, and adding to, Brickman’s masterpieces. We’ve been blown away by everyone’s creativity.”

Another well-received interactive aspect of the exhibition is finding LEGO mini-figure Eddie the Explorer, who is hidden in nearly all of the displays.

Te Papa has created a festival of events for LEGO lovers around the main exhibition. The Adults Only LEGO Night, LEGO Brick-a-Brac Building competition, and a dress-up movie screening of The LEGO Ninjago Movie had all sold out but more events are scheduled, including a free talk by Ryan McNaught (aka Brickman) himself on 24 January.

Ryan McNaught and his team had spent a jaw-dropping 4,944 hours building the 50 LEGO masterpieces using well over seven tonnes of LEGO bricks.