Two ancestral skulls have been returned to their homeland in the first repatriation ever to Rapa Nui (Easter Island).

This is only the fourth time that New Zealand has repatriated ancestral remains to another country.

The tīpunatīpuna ancestors were returned to a delegation from Rapa Nui on 27 January and farewelled by us, Canterbury Museum, Ngāi Tūāhuriri, and Otago Museum in a ceremony at Tuahiwi Marae, North Canterbury. 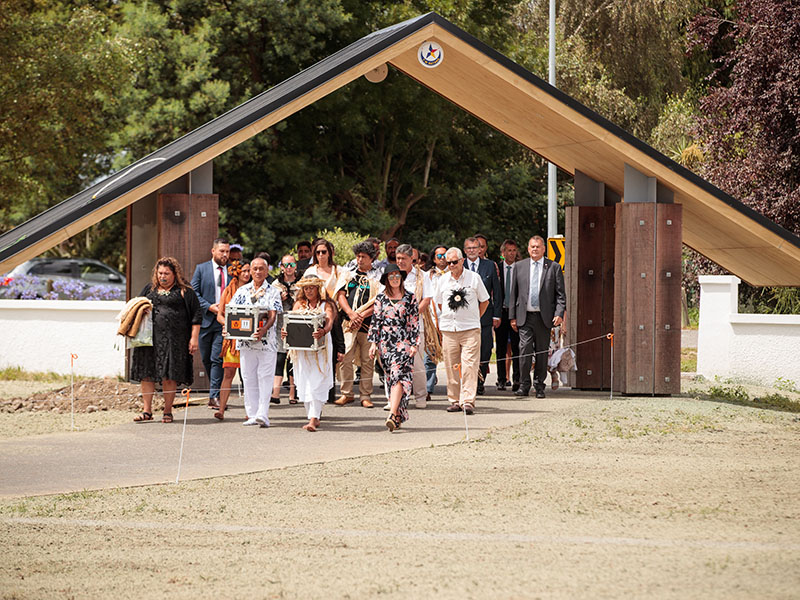 Canterbury Museum has cared for the first of the tipuna for almost 70 years since the New Zealand Government purchased 3,184 Māori and Pacific taonga from British collector William Oldman on 13 August 1948.

The Oldman Collection was distributed among New Zealand museums but is held collectively in trust here, as the national museum on behalf of the New Zealand Government.

The second tipuna was brought to Otago Museum in March 1935, along with other taonga from Rapa Nui, by Frederick G Dustin, the fuel engineer on Richard E Byrd’s second expedition to Antarctica (1933–35).

One of the two ships on the expedition called at Rapa Nui before reaching New Zealand in December 1933.

Dunedin was the expedition’s last port of call on the way to Antarctica and the first on the way back.

A small delegation from Rapa Nui consisting of kaumātuakaumātua elders, repatriation researchers, and government officials made the journey of nearly 7,000 kms from the eastern Pacific to Aotearoa to uplift their tīpuna.

“Our Ariki Hotu Matu’a sent out seven messengers toward the rising sun to find the land for our people, Te Pito O Te Henua. We, the sons and daughters of Ariki Hotu Matu’a, and our Māori siblings have come together to bring our ancestor back home,” said Piru Huke, Koro Oroŋo/Advisory Panel to the Rapa Nui Repatriation Program.

“We are deeply thankful to our Māori siblings for responding to our call across Te Moana A Kiva and welcome us on our journey to reunite with our tupuna after so many years.”

“Over the years many international institutions have generously supported our requests to repatriate Māori and Moriori ancestral remains,” said Kaihautū Dr Arapata Hakiwai.

“I am pleased we are able to respond in the same spirit.”