Tiffany Singh has pioneered social practice in Aotearoa, creating works that speak to the complexities of our times. She is acutely aware of the importance of inclusivity and collaborations and often describes her work as a ‘tool for social change’. In 2013, she received an award from the Human Rights Commission for bringing together diverse communities in her inspiring project Fly Me Up To Where You Are, 2013.

In this conversation, Tiffany and I take a moment to reflect on her practice, the importance of wellbeing and the commissions she is developing for Te Papa’s new art gallery, Toi Art.

For almost a decade you have pioneered social practice in Aotearoa, creating deeply participatory art works that operate within and beyond galleries and museums. What initially drew you to social practice?

I wasn't so much drawn to social practice but inadvertently trained in it, whilst working in the volunteer sector in India for two years from 2005-2007. The projects I created in this capacity taught me that the process and empowerment of marginalised communities was often far more important than the outcomes.

India also taught me the powers of faith and inclusion, the small rituals of life that become significant frameworks for existence: getting water, lighting incense, giving thanks. I learnt that the social part of ritual has a lot to do with resonance and how we relate to each other.

‘Ritual’ as you aptly describe can be a spectrum of activities from the secular to the sacred. What role do you think the concept of ‘ritual’ has to play in our contemporary lives?

Process and ritual can be a means to connect with one another through a dimension outside and greater than self and selves. It can be a way to imagine a better world we are all a part of and a means to dealing collectively with our problems.

Social practice is a methodology that puts these values into action. For me, it is the act of being committed to facilitate change, as social practice occurs in two forms: activity and inquiry. The platform can therefore be applied to enable the voice of not only the individual but also a larger community, so that we can potentially address social ills, create positive influence, and engender healing.

The purpose of my work is to draw the audience towards consideration of multiple perspectives. To do this you have to be inclusive. This is also where the psychological effects of the artwork are significant. If the audience goes home with a feeling of well-being, connectedness, wholeness, with a deeper understanding of a social or political issue, then much has been achieved.

Hopefully the flow-on effect supports these outcomes, with the value of the arts seen to provide proactive alliances between sectors rather than operating as a silo entity. This then has the capacity for strong networking and advocacy for increased public awareness and a deeper understanding of the role the arts play in national health. 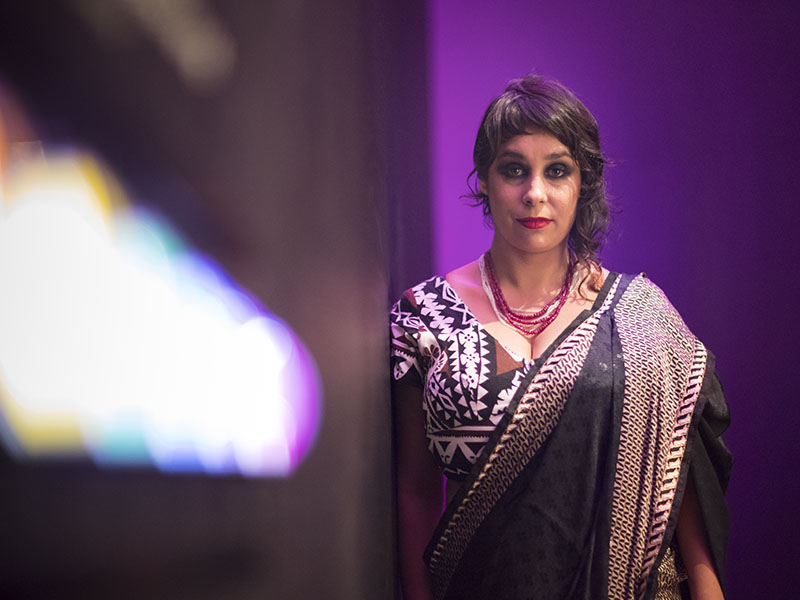 The idea of connecting and collaboration are integral to many of your works. In your practice you have under-taken large scale collaborations including Fly Me Up To Where You Are, 2013 where you worked with 15,000 school children from low-decile schools across New Zealand.

Also, in your most recent work, Journey Of A Million Miles Starts With One Step: The Stories Of Beyond Refuge, 2017, you collaborated with the Auckland Resettled Community Coalition to create a platform for the stories of resettled communities.

What do you hope is the lasting impact for your collaborators?

Every project is different. For Fly Me Up To Where You Are, the project’s capacity to operate as a therapeutic process pushed it to function as more of a community service initiative, repositioning art in schools as a cathartic process. This developed a space for freedom, trust, and expression as an outlet for processing experiences and emotions, which at the time contributed an invaluable and valid arts platform to the current national standards curriculum.

Hopefully the lasting impact throughout all the projects is for the audience to trust in their own capacity to affect change in the world around them. Although the artworks are often not intentionally positioned to be political and operate largely without a politically guaranteed public, the important relationship between democratic public life, education, politics, and learning informs and encourages an audience pedagogy to enter the sphere of the political. This then hopefully enables a deeper constructivism in practice, through practice.

By building a framework of dilemmas that explicates the conceptual, pedagogical, cultural, and political planes of the constructivist art making experience.

I often think that your work is a ‘call to action’ in a way that encourages social, cultural, and spiritual wellbeing. How are you exploring the holistic concept of wellbeing in the new commissions you are developing for Te Papa’s new galleries?

My new work at Te Papa taps into my current academic enquiry which explores the dynamic between arts, health, and wellbeing. The project aims to enrich our understanding of the world by drawing on the use of diverse forms of knowledge including scientific evidence and traditional knowledge which examines wellbeing theory in conjunction with a contemporary art exhibition. Hopefully this ignites engagement and participation via a tangible opportunity for the audience to see how the arts can be a useful tool to improving their own wellbeing.

The purpose of my work is to draw the audience towards consideration of multiple perspectives.

Why is the concept of wellbeing so important to this moment in time?

I think wellbeing is always important, however we seem to have migrated to a place where we are socially focused on the individual over the collective, where we base success on the acquisition of things rather than being morally and ethically fulfilled. Wellbeing is not just the absence of disease or illness. It is a complex combination of a person's physical, mental, emotional and social health factors. An enquiry into wellbeing enables exploration into the possibilities for collective impact and collective social wellbeing.

At a time where medical care is expensive and traditional knowledge often overlooked, prioritising wellbeing is akin to prioritising humanity over affluence and being sympathetic to the environmental conditions we creating for us all.

In 2009 the Mental Health Foundation stated that the role of a democratic government is to promote the good life: a flourishing society where citizens are happy, healthy, capable, and engaged. In other words, a society where people have high levels of wellbeing. With the outcomes of the Unicef Report placing New Zealand 34th out of 41 developed countries, it seems now more than ever that wellbeing should be a key focus for our country.

Since we have worked together, I have become hugely aware of the many dimensions and properties of colour. How are you exploring colour in these new commissions?

Both works explore colour in relation to Eastern philosophy and the chakra relationship to colour and the body. One work does this through the use of common organic materials that have healing capacity, presented as a natural and medicinal spectrum. The other explores colour through active engagement. The mediums in the works are vastly different but both offer a sense of colour immersion and sensory experience.

In the newly commissioned work colour becomes a signifier of our individual vibrations as the space becomes reflective of how these vibrations activate each other. Essentially colour has become the medium for me to frame the wellbeing enquiry as both a physical and metaphysical experience, one that is sensory and intuitive and that hopefully transforms the gallery space into a therapeutic environment in all stages of its evolution.

Your work often has a national focus, albeit through your collaborations or your site specific installations across the country. What does it mean to have your work in the national art gallery?

It is a huge honour and privilege not only to exhibit at Te Papa but also to have had the opportunity to work alongside the inspiring, unique, and talented women who have made it all happen. Housing the artwork in our national museum gives the work national authorship and ownership which is important.

Because the visitor numbers are so high, it’s not only a localised audience which is informing the artwork but a national and potentially global one too. I think this makes reading the outcomes more honest in a way. A bit like Fly Me Up To Where You Are, when you get to numbers in the 10,000s, it is easier to see patterns and draw accurate conclusions as to the reality of what is really going on.

It is also a prestigious platform, so exhibiting a social practice artwork as a contemporary medium in such an institution gives it weight and credibility to explore intentions around repositioning or dislodging the perception of object orientated contemporary art.

Without giving too much away, what do you want Te Papa visitors to experience when they see your new works?

I would really like it to be about feeling. I would rather the audience or co-authors of the artwork feel the work more than think about the artwork. I hope it is an uplifting experience similar to standing in a ray of light coming through a cathedral window, a heightened sense of being connected to something greater than self. A feeling that hopefully contributes to the realisation that engaging with the arts has a significant part to play in improving physical and mental health and wellbeing.

This article originally appeared in issue 23 of Applause, a publication by the Arts Foundation