The organs of a colossal squid

Squid use oxygen from seawater for respiration. The seawater enters the mantle through the opening near the head, and passes over the gills. Oxygen diffuses from the water into the blood, and is transported to the gill (or branchial) hearts by a network of many blood vessels.

The colossal squid has two large gills, each with 20 to 80 gill filaments on either side, which hang down into the mantle. In the dissected smaller colossal squid the gills are striped with lines of dark pigment. 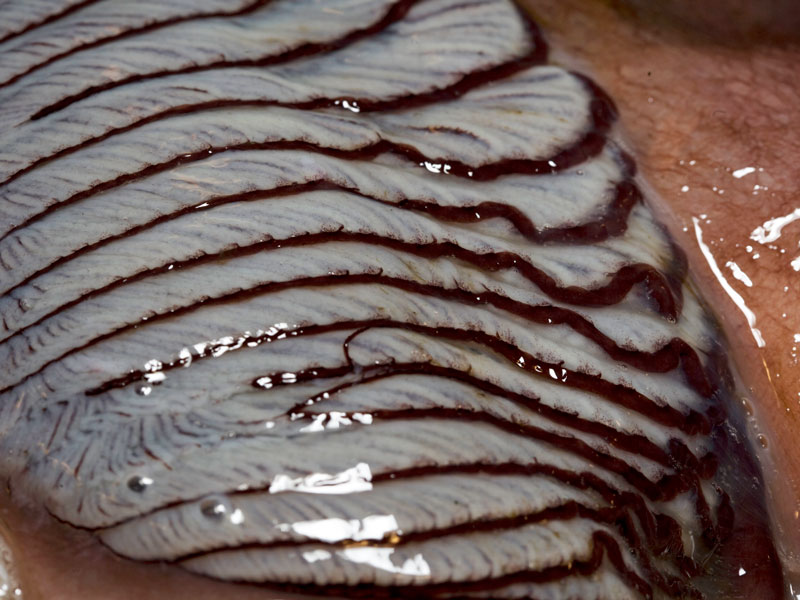 The branchial hearts pump blood to the gills, where oxygen is taken up. Blood then flows to the systemic heart, where it is pumped to the rest of the body. The systemic heart is made of three chambers: a lower ventricle and two upper auricles.

Squid blood is blue, not red as in humans. This is because squid blood contains a copper-containing compound called haemocyanin. In humans, the blood is red and contains the iron compound haemoglobin.

The squid's stomach is a small, shiny white sac that connects to the stomach pouch or caecum. Digestion of food begins in the stomach. The caecum also performs some digestion and is the primary site of absorption of nutrients. Enzymes from the liver and pancreas help digestion.

Waste passes into the intestine, a narrow tube adjacent to the stomach pouch, then empties into the rectum. The end of the digestive system is the anus, from which waste exits into the funnel.

Squid and octopus have an intricate nervous system, more complex than other molluscs, and invertebrates in general.

The squid brain is enclosed in a cartilaginous head capsule and includes two large optic lobes. These indicate that vision is very important to squid. Up to 80 per cent of the brain is devoted to processing visual information.

The brain is shaped like a doughnut and surrounds the narrow oesophagus. It is very small in comparison with the overall size of the body — a 300 kilogramme colossal squid has a brain weighing less than 100 grammes!

Squid can tell how they are positioned in the water. This information is provided by two statoliths located within the squid's brain. Each statolith is a small calcareous structure which sits within a chamber called a statocyst. As the little bone moves around within the chamber according to gravity, the squid can work out which way is up, in the dark.

All squid have a sac of ink inside the mantle. The ink is a dark liquid and is expelled through the funnel. If the squid meets a predator, it shoots out a cloud of ink, which hides the squid so it can escape.

No one has ever seen a colossal squid producing ink so we can't be sure what the ink looks like or how the squid uses it. As there is no light down at 1,000 metres in the ocean, dark ink would be useless! It is possible that the colossal squid has luminescent ink.

All molluscs have a shell. The colossal squid has an internal shell called the gladius. The gladius is a rigid internal structure that supports the squid's body and runs through the upper part of the mantle, between the paired tail fin. It is made of chitin — a tough, protective, and semi-transparent substance, which is primarily a nitrogen-containing polysaccharide. The gladius is easy to remove when dissecting a squid, and looks like a long piece of plastic.