From ‘squidcicle’ to public display. Learn about the work that went into preparing the only colossal squid on display in the world.

The first thing the team had to do before they could examine the colossal squid was thaw it out. The squid had been frozen on board the San Aspiring, folded up in its landing net inside a plastic container. It had then been stored in a freezer at Te Papa for over a year. The huge 'squidcicle', as it was nicknamed, was a problem. It was very heavy to move, and the team had to work out a way to thaw it without damaging the valuable specimen.

The huge 'squidcicle' is lowered into its thawing tank, 2008. Te Papa

A month before the team of scientists were due to meet in Wellington, a special thawing tank was built at Te Papa. The six metre-long temporary tank was built using plywood panels lined with several layers of polythene. It was filled with 6,000 litres of water, and 320 kilogrammes of salt was added to bring the salinity to approximately that of seawater (about 3.5 per cent, or 35 parts per thousand). The salt water would speed up the thawing process, and act as a sterilising agent while the thaw was in progress. 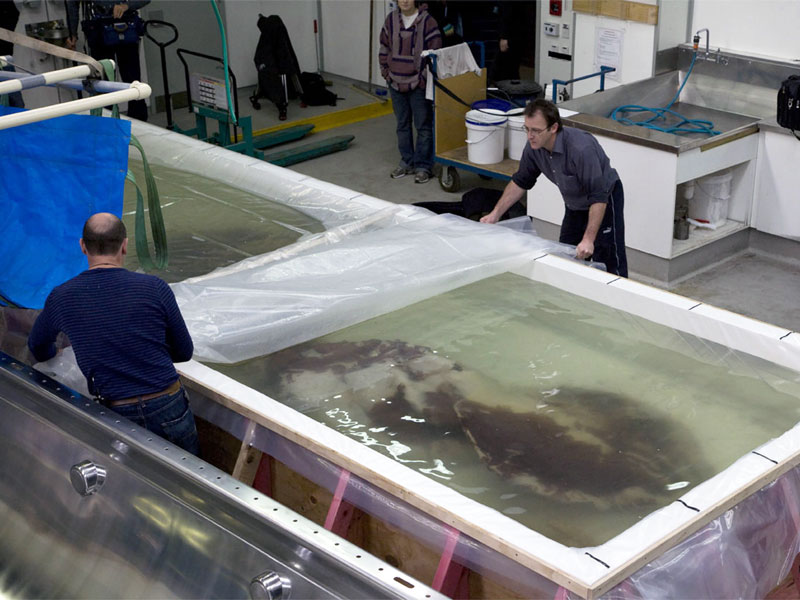 The temperature of the water in the tank had to be kept down so the squid wouldn't thaw too quickly. About 10 degrees Celsius was ideal. A tonne of crushed ice sourced from a local fishing company was shovelled into the tank to bring the water temperature down.

Once the tank was ready, the 495-kilogramme squid was finally removed from the freezer. The steel frame and plastic container surrounding the specimen was cut away. The colossal squid was carefully hoisted up and then lowered into the tank (video 1). The thaw could begin.

The scientists put on waders and gumboots so they could climb into the tank to examine the specimen. Although the outer edges of the 'squidcicle' thawed relatively quickly, the central core remained frozen. The team
used running water to speed up the thawing process. As the specimen started to thaw, the landing net and the blue plastic lining it had been frozen in were carefully cut away. When the arms and tentacles were unfurled, bubblewrap and floating bags were used to hold them up in the tank to stop them getting damaged.

Eventually, after 60 hours, the specimen had thawed out. It was now lying with most of its body upside down in the tank, with the ventral surface, or underside, showing. The team quickly realised that the squid's tissue was gelatinous and delicate. To avoid damaging it, they decided not to try to turn it over.

At last, with the thawed specimen laid out in the tank, the scientists could finally start to examine the colossal squid in detail.

Once the colossal squid was thawed, it had to be stored in a liquid preservative to stop the tissues rotting. When they are stored, biological specimens, just like food, can become contaminated with microorganisms which make them decompose.

To prevent this, soft-bodied museum specimens are often stored in a preservative such as formaldehyde. Formaldehyde is a pungent gas consisting of hydrogen, oxygen and carbon. It is available as an aqueous solution known as formalin. This is what the colossal squid was preserved in.

Formalin is toxic, so the scientists needed to take care using it. They had to wear full protective gear, including respirators, when adding it to the tank.

The team also injected formalin into the arms and outer body of the squid. Once the formalin was pumped into the tank, the lid was put in place, and the squid was left in the 6,000 litres of solution to 'fix' for two months.

Pure formalin is acidic and would have dissolved the hooks and beak of the squid. To stop this happening, the liquid in the tank was buffered with bicarbonate to keep it as neutral as possible.

The pH level of the storage solution was monitored every three hours for the first 24 hours. After that, the pH was checked every three days.

During the preservation process, the colossal squid changed. The tissues became harder and less flexible, and there was some loss of colour.

For safety reasons, formalin cannot be used in public spaces. So for public display in the Te Papa exhibition spaces, the formalin had to be replaced with another liquid preservative. The team decided to use glycol. Propylene glycol is a colourless, nearly odourless, syrupy liquid derived from natural gas. It is an antifreeze as well as a preservative. 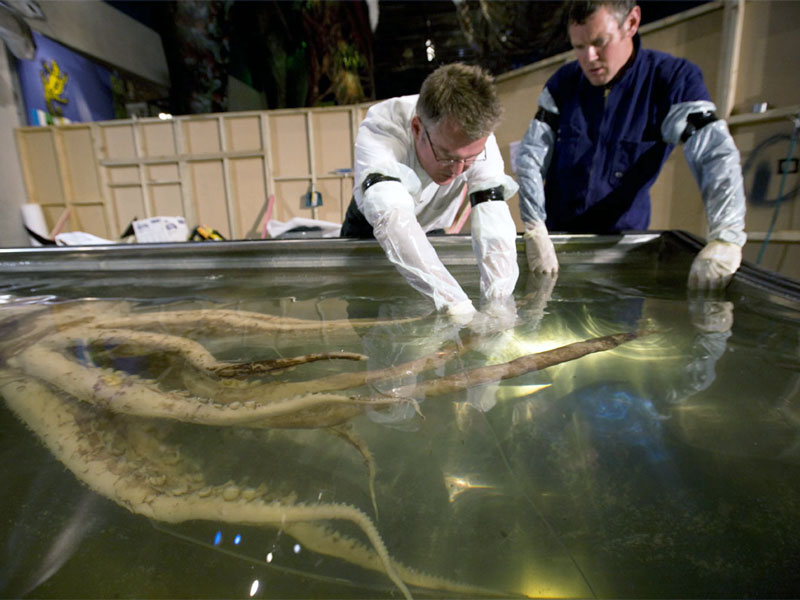