For many New Zealanders, the legacy of Crown Lynn is its domestic ware.

At the height of production in the 1960s and 1970s, millions of household items were produced every year, and most homes had at least a few pieces of this distinctive crockery. Ubiquitous and affordable, Crown Lynn was the nation’s place setting of choice for almost half a century.

When war was declared in 1939 and the importation of crockery from Britain ceased, the well-established brick, pipe and tile factory at New Lynn was the only domestic manufacturer able to supply household items.

The company had been experimenting with slip-casting – the process of shaping liquid clay in plaster of Paris moulds – since the 1930s, but this proved too slow to meet wartime demand.

Instead, staff engineered a basic hand-operated jigger, which shaped soft clay between a template and a rotating mould, and by this method were able to produce domestic ware on an industrial scale. 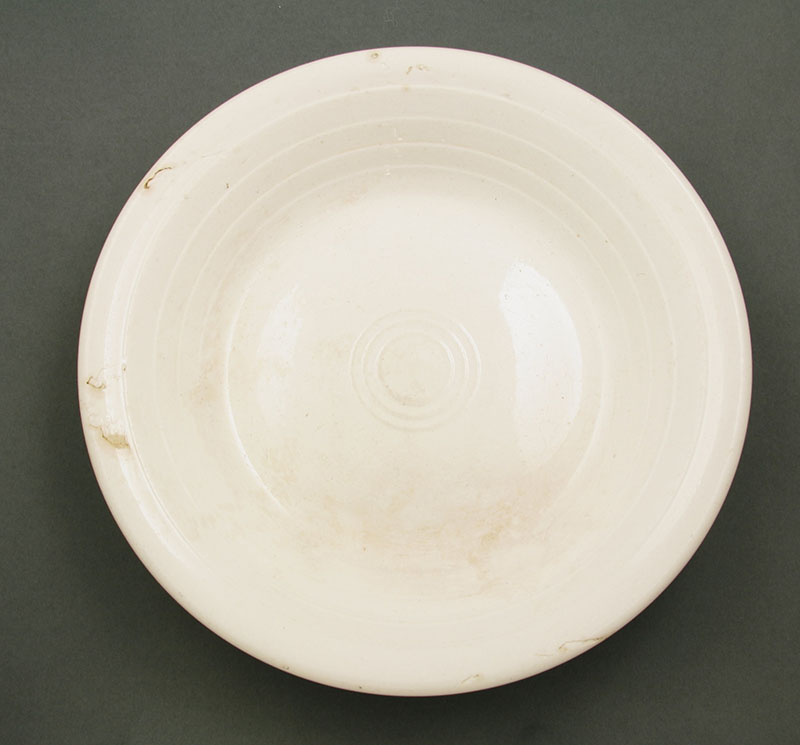 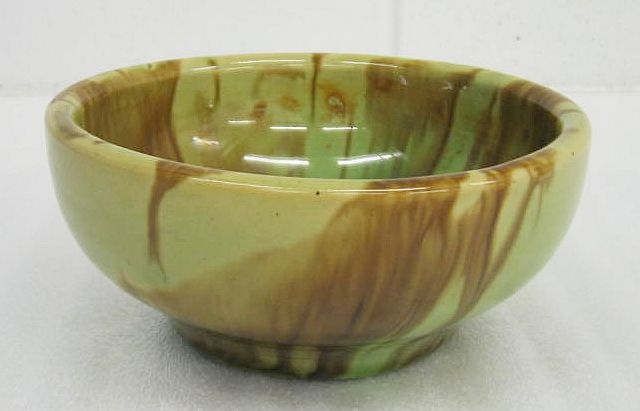 New Zealand houses underwent a major transformation in the years immediately following the Second World War, as a new culture of consumerism and new forms of materialism emerged.

Families sought the comforts and conveniences they had been deprived of during the war, and items such as refrigerators and small appliances became essential elements of modern living.

Crown Lynn products appealed to this new generation of home-makers, offering affordable and robust kitchen essentials that also suited a range of tastes.

By 1967 the factory was turning out ten million pieces of tableware and pottery a year, producing plates, bowls, mugs, and jugs in dozens of different designs.

At the height of its popularity, Crown Lynn crockery featured at almost every stage of meal preparation and consumption.

Those purchasing a McAlpine refrigerator in the 1950s, for example, received as a bonus gift a beautiful Crown Lynn water jug, and from the early 1960s sophisticated Kelvinator and Leonard brand refrigerator jugs were also available. 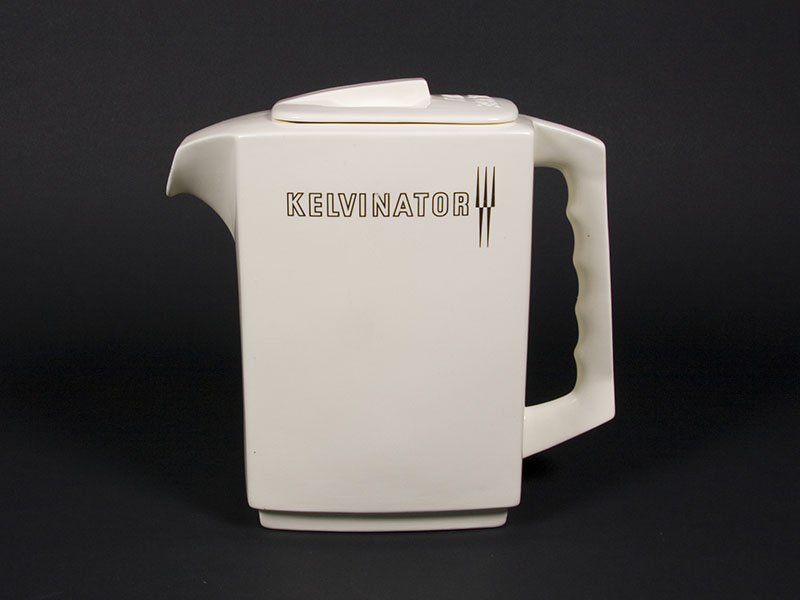 Sturdy Crown Lynn mixing bowls were another kitchen essential, and thousands of ‘beehive’ bowls were made in the 1940s and 1950s.

Early examples were plain white or painted with a single shade, but in the later 1950s bold ‘Fiesta Ware’ was introduced, featuring hand-painted bands of vivid colour. 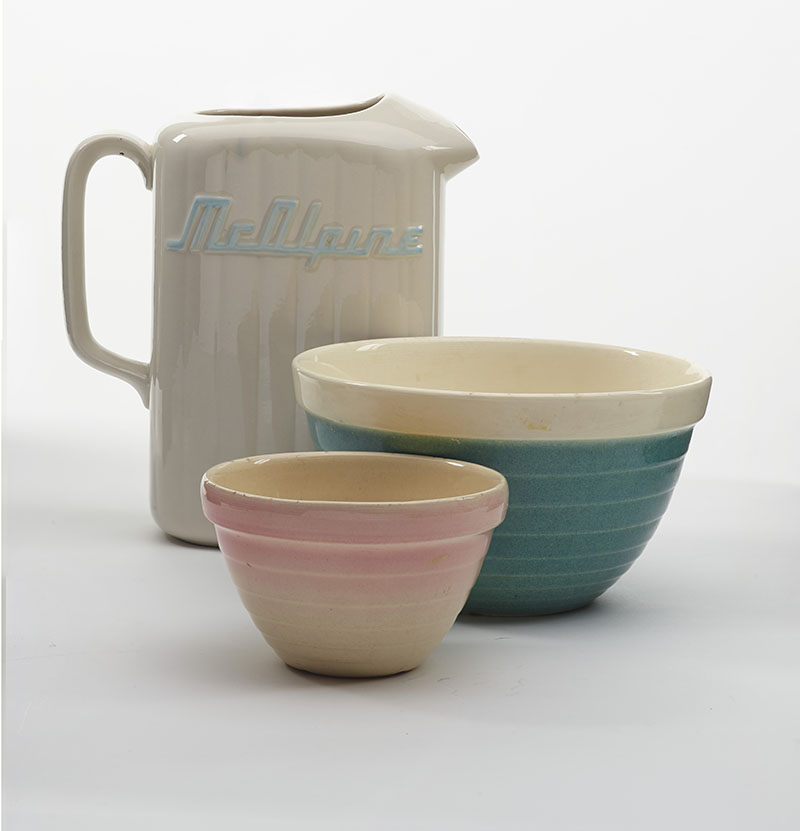 Crown Lynn also featured prominently in New Zealand dining rooms, and many will no doubt remember eating off their brown and orange tinted ‘Autumn Splendour’ dinnerware.

This lithograph design, supplied by a New York manufacturer, was the most popular dinnerware pattern of the 1960s. It was one of five designs issued under the highly successful Crown Lynn replacement policy, which allowed consumers to build up their sets on a piece-by-piece basis, and guaranteed that the various components would be available for at least five years

Autumn Splendour was in fact available for almost two decades, and some collectors still scour second-hand shops in the hopes of completing their set. 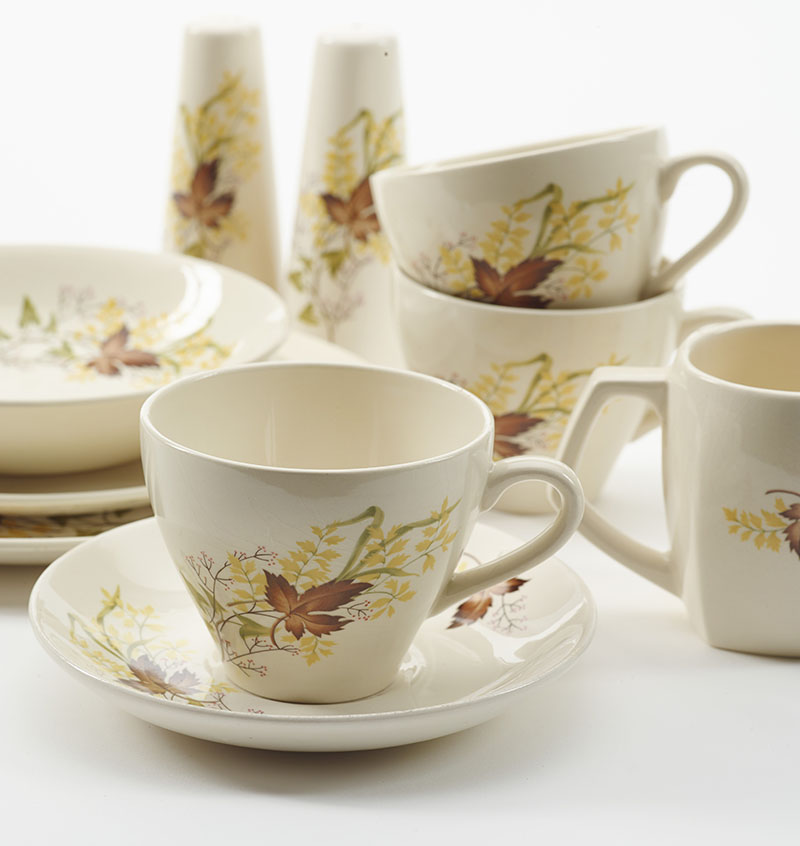 Another popular series of household items, made especially for young New Zealanders, was the range of Crown Lynn nursery ware available from about 1955.

Depicting animals, nursery rhymes, cartoon, and television characters, this line was one of the company’s most successful in the 1980s, and gave children all over the country added incentive to finish their breakfast! 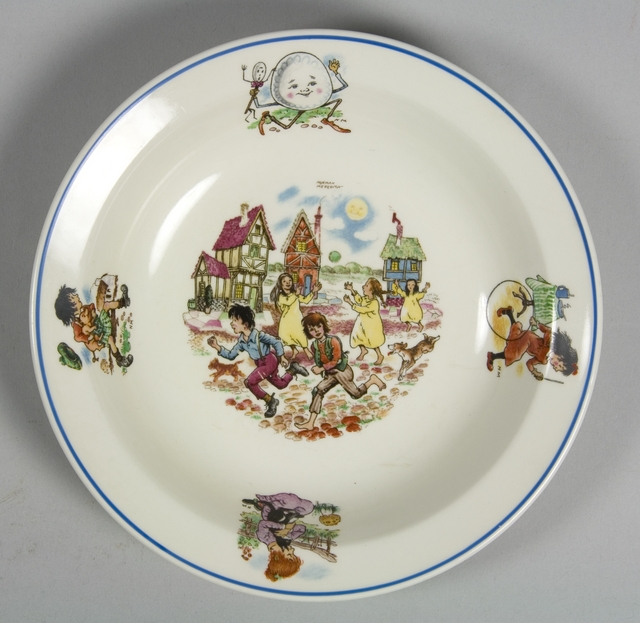 Although Crown Lynn made extensive use of imported lithographs, from the 1950s they also sought fresh patterns by New Zealand artists and ceramicists.

In 1959 an annual competition was established in order to build up an inventory of home-grown designs, and the presentation ceremony, attended by prominent politicians and reported on the television news, was a highlight of the Wellington social calendar.

Rejecting elaborate ornamentation in favour of clean lines and simple patterns, these locally-designed pieces are still highly collectable, representing the development of a unique and bold New Zealand style. 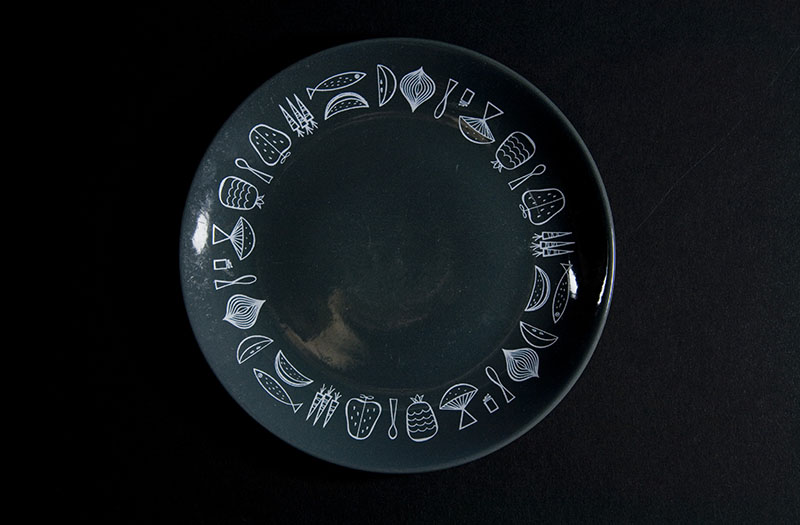