How Crown Lynn made a mark for NZ Railways, Air New Zealand, tea shops, and the YWCA.

Crown Lynn crockery was known in the 1940s, '50s and '60s for being sturdy and reliable – a 'no-nonsense' brand. Their heavy indestructible dishes were perfect for hotels, tearooms, and organisations who serviced large volumes of customers. 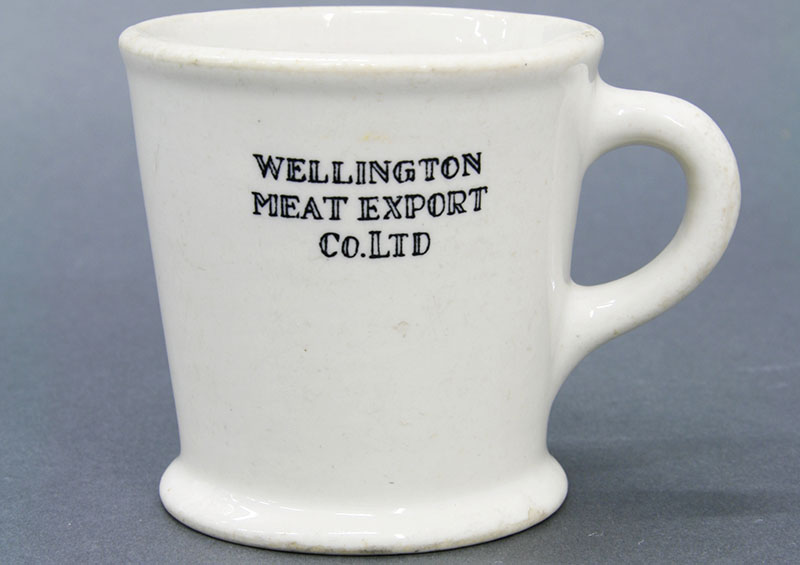 Ceramics like those made for the Wellington Meat Export Co. Ltd, Duke of Edinburgh Motel, and the YWCA were labelled as 'vitrified', a term that refers to vitrified porcelain a type of extra strength ceramic created by firing at very high temperature. 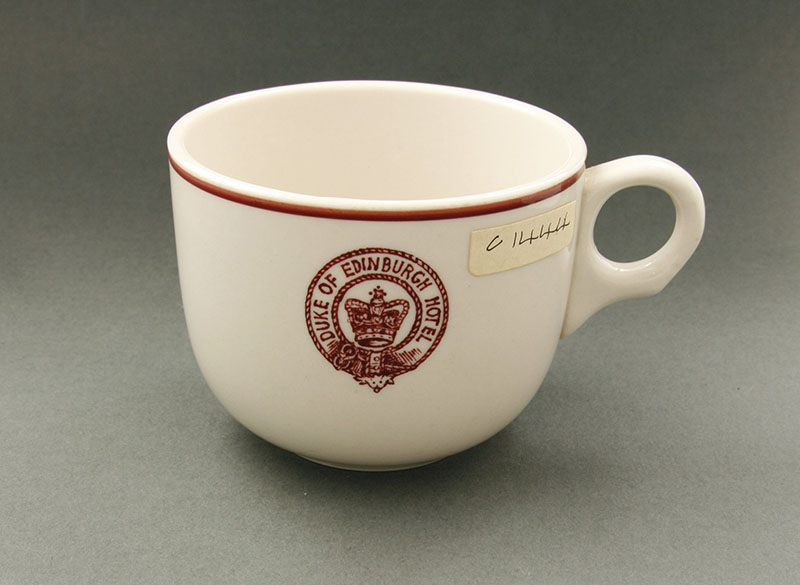 The low levels of water absorption makes the end product very tough and ideal for heavy duty use in institutional and commercial catering. 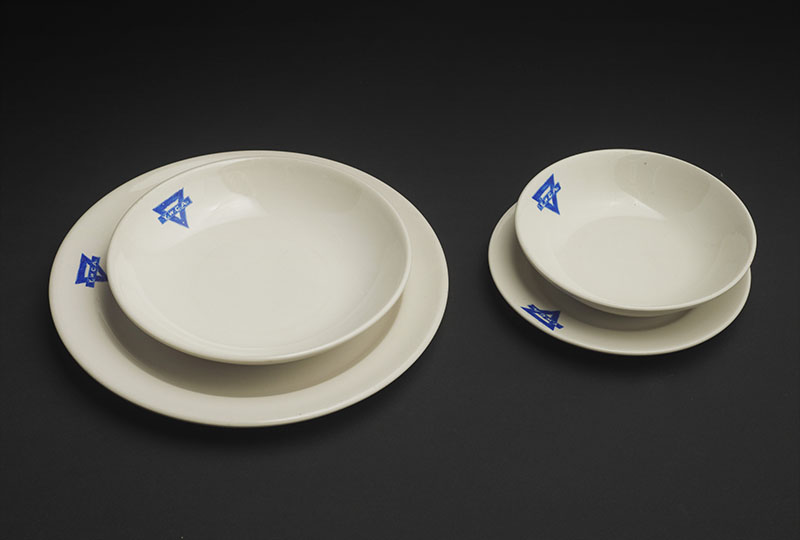 One of Crown Lynn's high-use ranges came to become one of New Zealand's most famous icons – the New Zealand Railways cup and saucer.

Crown Lynn and the N.Z. Railways

In 1939 the outbreak of the Second World War saw the imposition of cargo restrictions, which meant that virtually no pottery was imported into the country.

New Zealand Railways, which provided the bulk of inland public transport in New Zealand, urgently needed replacements for its mugs, which had previously been supplied by British firms. 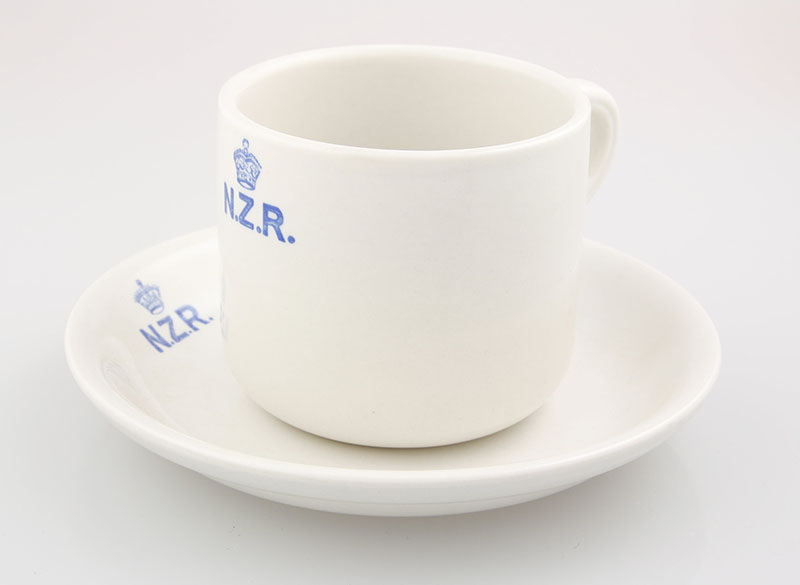 In answer to their request Crown Lynn produced a straw-coloured mug without a handle with the letters 'NZR' stamped on in large block letters under a clear glaze. In 1943 a handle was added.

Like much of the company's production in the early years, the Railways cups were highly functional and sturdy.

Crown Lynn was declared an essential industry during the war, producing durable mugs and cereal bowls for American soldiers in the Pacific. Rank-and-file soldiers were given the Crown Lynn handleless mugs, while the officers received mugs with handles that were probably American-made.

The Crown Lynn lines of military and Railways crockery were highly successful.

Immediately after the war, Crown Lynn began to experiment and diversify, as it saw the need to modernise. Craftsmen were imported from England and new equipment was purchased which enabled a more extensive range to be developed.

By the 1950s, the famous Railway cup was produced on a machine and the logo was a transfer placed on a vitrified body and finished with a clear glaze. 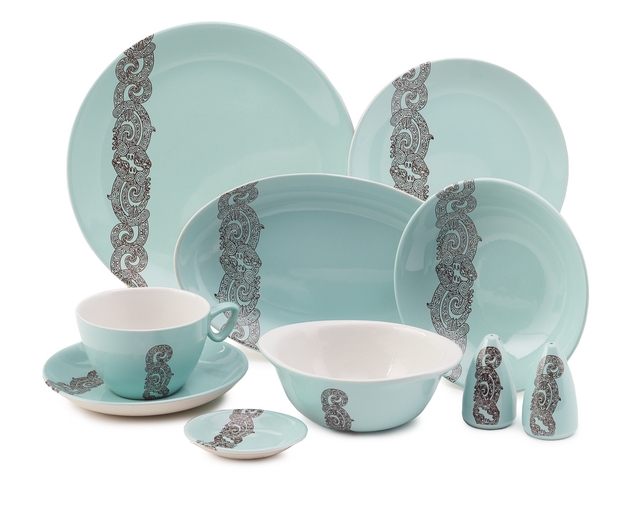 The original gold motif was replaced by a more resilient brown one – style was important but so was practicality.

Jet flights were glamourous affairs and the national airline chose this design as part of their plan to showcase the best New Zealand had to offer in terms food and wine, natural flora and fauna, and Māori culture. 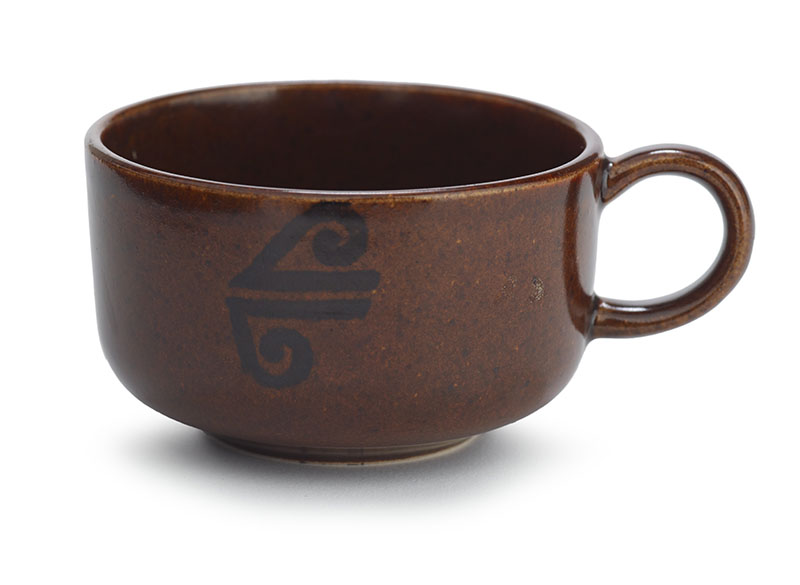 The turquoise with brown Māori motif set for first class passengers was discontinued in 1973, but Crown Lynn picked up an even more lucrative contract that was to service the more numerous economy class.

A dark-brown glazed set with a black Koru, designed by Mark Cleverley and David Jenkin, was the height of fashion at the time. The stackable design made it very practical as well as beautiful.

It was a large commission, they produced 330,000 items for the first order alone.

The partnership between Air New Zealand and Crown Lynn saw many different innovative products come to the fore.

Both companies continuously sought out excellence in cutting edge design. Air New Zealand were often influenced by a desire to showcase their point of difference, and often focused on highlighting the airline's longstanding pacific routes.

These Crown Lynn cups with their Polynesian motifs appeared on international flights in the 1970s. Etched on the base is 'Air New Zealand knows the South Pacific best'.

By then TEAL and Air New Zealand had been traversing the Pacific for over 20 years.