Below are excerpts from his diaries along with accompanying photographs, offering a personal point of view of the coronation celebrations and royal tour in 1953–54.

Leslie Adkin was a Horowhenua farmer who was a noted amateur geologist and ethnologist. Photography was also a passion and he documented every aspect of his life, from the 1910s until the 1950s, from his family and New Zealand life, to royal occasions and visits. Here are his diary entries from the coronation of Queen Elizabeth II and her subsequent visit to New Zealand in 1953–54.

‘Coronation Day of Queen Elizabeth II. Sky cloudy but not completely overcast. About 9.15am., Maud, Nancy, Derek, + I went in car to vicinity of Rly Stn + walked to grounds of Parliament House. Large crowds assembling. Watched ‘heads’ + dignitaries assemble on steps of House. 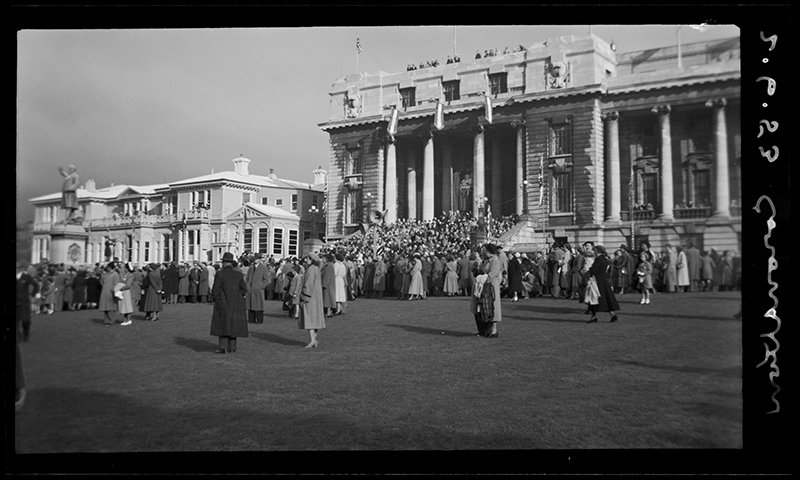 Met Tony Barrow + his wife + was introduced to latter. Took photos of crowd in front of Parl. House from three points of view. The ceremony for the coronation took the form of a religious service – prayers, Bible reading, +c, followed by speeches by the Governor-General (Sir Willoughby Norrie), by Hon. Holyoake (who announced conquest of Everest by Hillary, the NZ-er, + Tensing, a Sherpa – deafening cheers), by Nordmeyer (for Opposition + he couldn’t keep off propaganda). 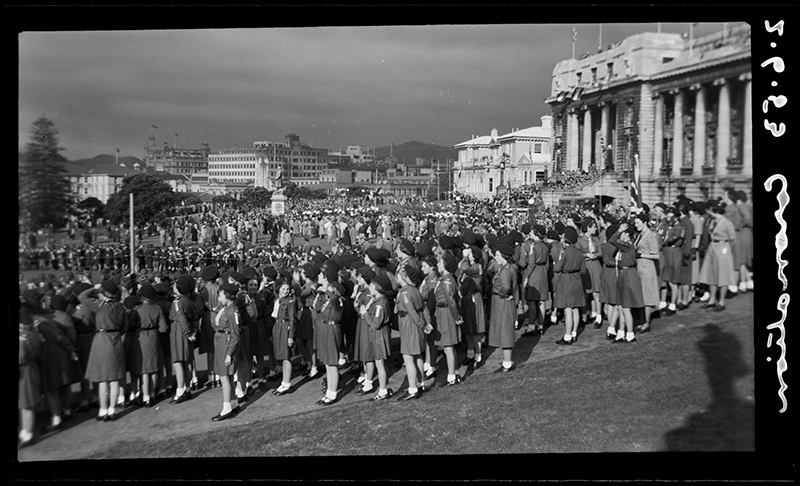 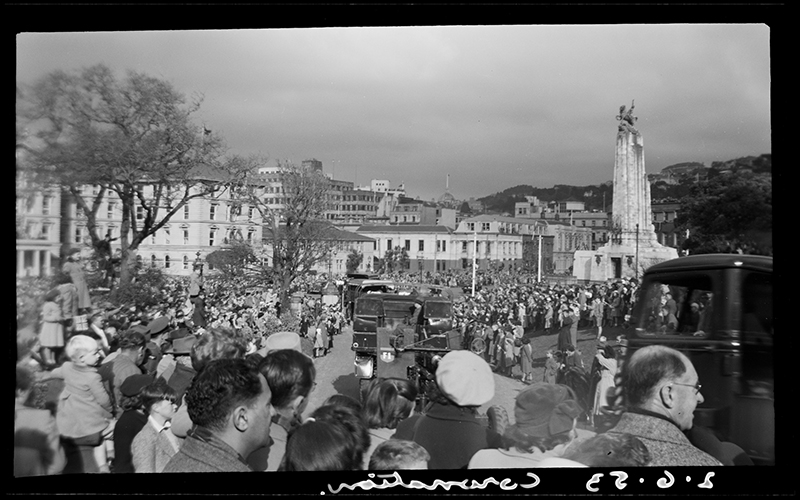 Unfortunately, about midday a light shower fell + damped proceedings + participants in the procession, but during the morning gleams of warm sunshine had been very pleasant + gave chance for photos. Photo looking down Parl. House driveway with procession passing + Cenotaph in distance.

Back to Evans Bay for late lunch + Nancy + Derek then returned to Petone. In evening the pyramid of searchlight beams – 7 in all – was put on + made a good display; took a couple of photos in an attempt to record same.’ 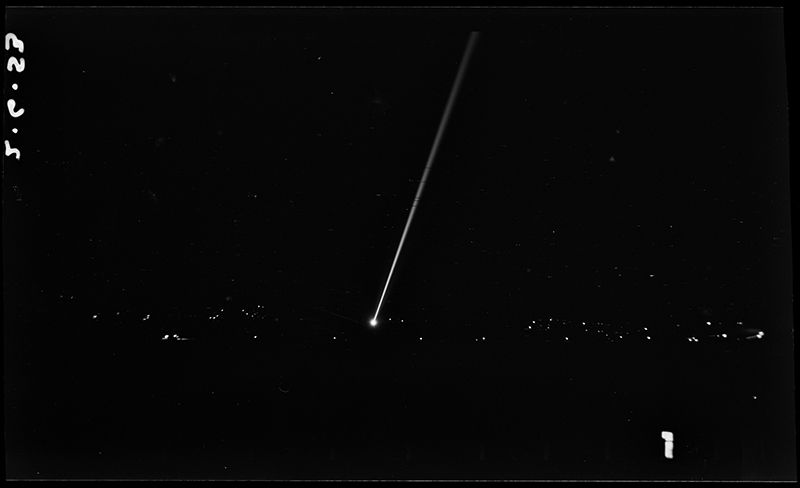 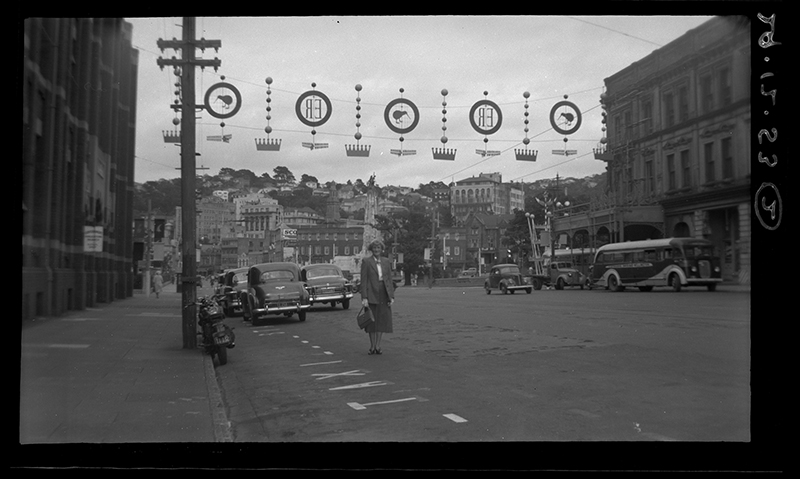 Met Mr Joiner in Hataitai + he confirmed the death of Pat Olsen, of N.Z.G.S. Paleontological Section (my daily fellow worker) in the Tangiwai railway disaster – we heard the name last night over radio, with Rotorua address given, this causing doubt of identity, but I was very concerned + now we know the worst, feel very upset.’

‘Fine day in spite of adverse weather forecasts. Nancy + Royce went out for day in car + expect to see Royal visitors approaching Wellington at Ngahauranga Gorge. I spent morning in bed + after lunch Maud + I took train to Thorndon terminus. Walked to + up Sar St. to an outlook I had discovered directly over Aotea Quay ramps. 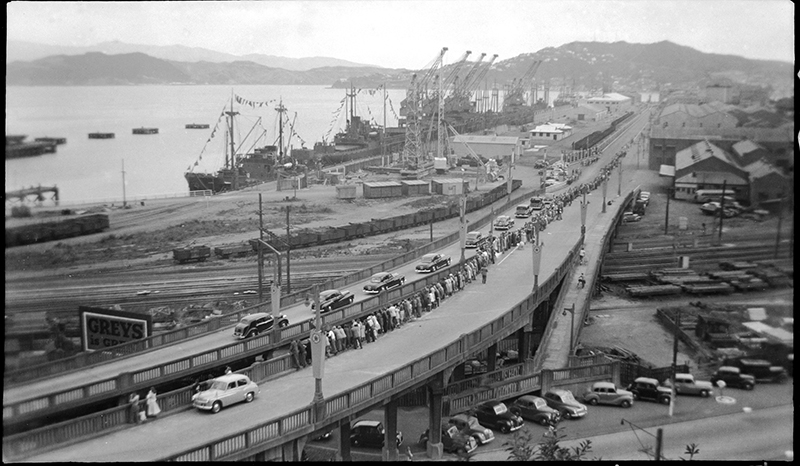 Got there just before 2.pm + had to wait until about 5.40, but were entertained by passing traffic – cars, trams, electric services +c – and the crowd arriving below. Lunched + watched things; the day became overcast but during a gleam about 4pm took photo (1) view along Hutt Road; (2) view along Aotea Quay. When Royal procession appeared took (3) same view as (1); + (4) same view as (2) showing the 20 cars, including Royal car, passing along, but weather now dull. Maud + I had a pleasant time, being congenial soul-mates.’

‘All of us – Nancy, Royce Noble, Maud + I – left in car about 10.10am + proceeded to Town Hall to see Queen + Duke arrive for Civic Reception (for which we failed to draw cards), but crowd was too dense to see Royal couple. Took 2 photos of crowd at Town Hall. Walked round to other side of Hall + this time got a brief close-up of the Queen as she departed.’ 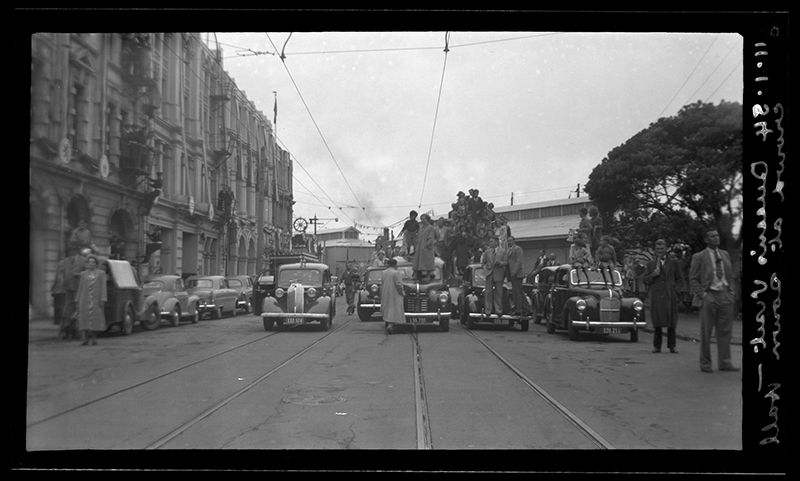 ‘Magnificent clear day. To office. Afternoon a holiday for attendance at opening of parliament by Queen. Had quick lunch, took photo (1) of Kirkcaldie + Stains decorations, met Maud at Turnbull Library, + we went to Parliament House grounds where the people were already assembling. Photo (2) of crowd on slopes; + (3-4) panorama from north-end of grounds … We took up position on grass slope above curve of drive + settled down to 2 hrs wait.

Passing cars with notables, +c, also Pipe + City bands passing by helped to entertain. At 2.25pm the Royal car came + we got our best view yet of the Queen + Duke. Then went up to front of Parliament House + listened to broadcast of Queen’s speech at this special session of Parliament.’ 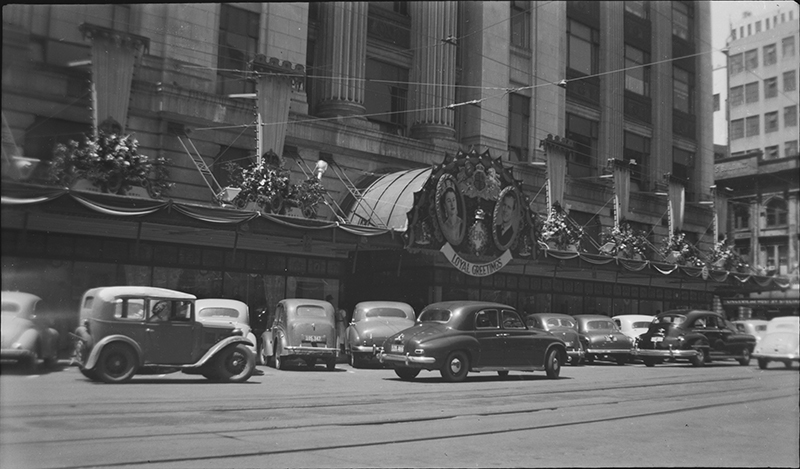 ‘Last day of Royal visit to W’gtn, + perfect weather. About 8.am Maud + I took tram to Basin Reserve (for which we had tickets) to see the Queen + Duke on their way from Govt. House to Paraparaumu to take plane for Blenheim. Our seats were in grandstand but we got a transfer to others lower + nearer road. W’gtn Pipe Band + a Scot’s lassie dancer entertained us. Women’s Red Cross, +c, provided lady ushers who were most polite + helpful to those present. 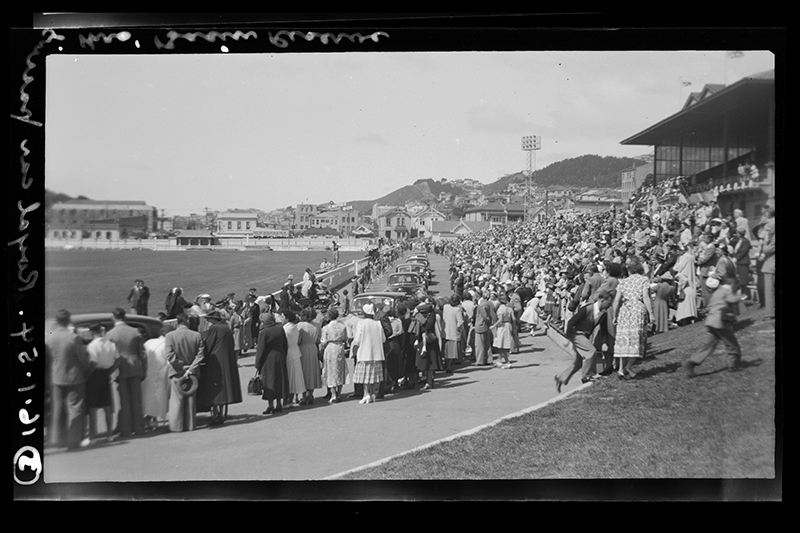 This photograph shows spectators watching Queen Elizabeth II’s cavalcade driving through the Basin Reserve in Wellington. It was taken on the last day of the Queen’s stay in the capital, before she and the Duke of Edinburgh flew to the South Island. Queen’s visit, December 1953-January 1954 ..., 16 January 1954, by Leslie Adkin. Te Papa (A.008487)

See all photos on Collections Online for the Queen’s visit in Wellington, 1953–54

Some small formatting changes have been made for legibility on the web.