The New Zealand-born painter, designer, and illustrator Felix Runcie Kelly (1914-1994) would have loathed the use of the word gay in the title. While homosexual, he was never ‘out’ in the modern use of the term. No doubt, he would have preferred ‘gentleman bachelor’.

Like his gay compatriots Rex Nan Kivell and Douglas MacDiarmid, he left New Zealand at a young age. Kelly never returned. Born in Auckland into a prosperous professional family, he moved to London to join his mother in 1935 at the age of 21, following his father’s bankruptcy. Encouraged by his mother, Hortense, Felix sought to establish an artistic career in his adopted country, first in magazine and book illustration, cartoons, and advertising (which he had already done in Auckland) and only then in painting and theatre design. His early illustrations have a light-hearted whimsy with an undertone of the bizarre and even the macabre in a Kind Hearts and Coronets sort of way. 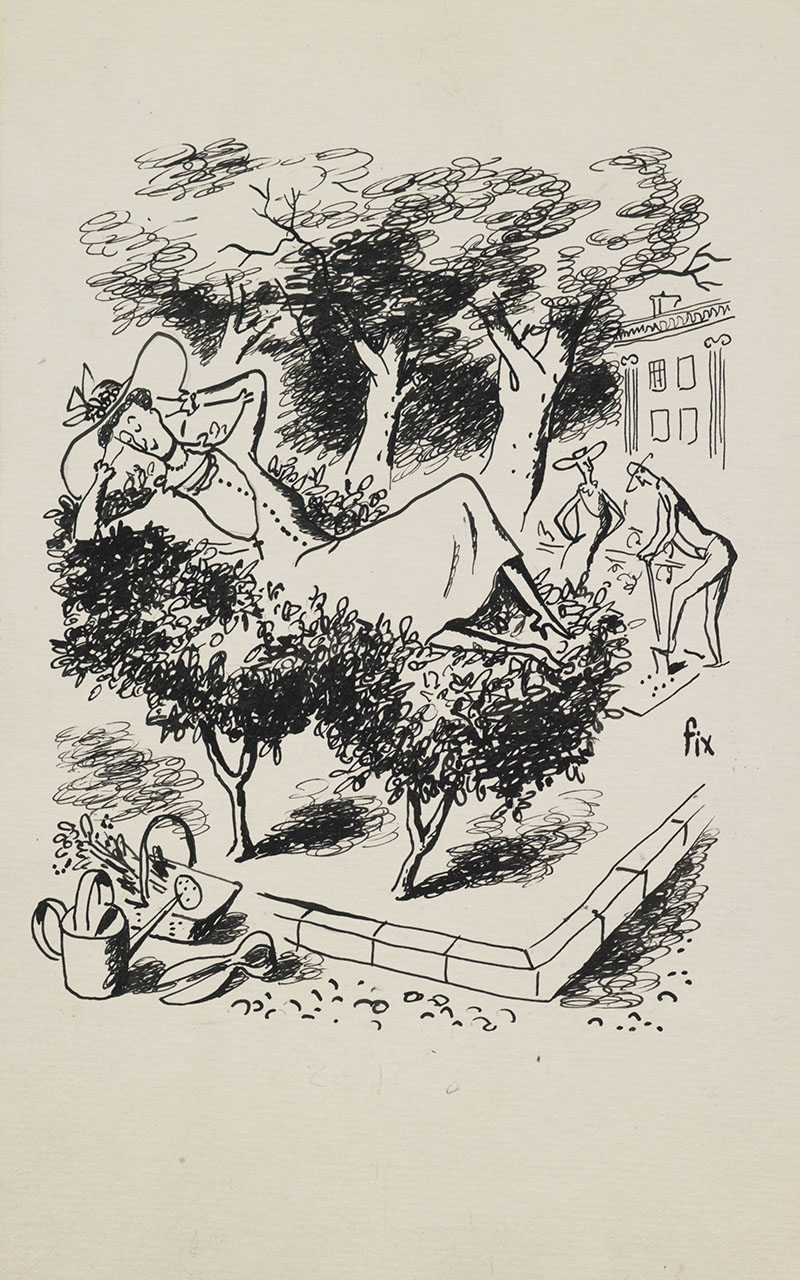 The breakthrough came in 1943 with his inclusion in an exhibition at the Lefevre gallery in fashionable St James’s. The eminent art critic and champion of modern British art Herbert Read bought one of Kelly’s paintings, The Three Sisters, drawn to it no doubt by its surrealist qualities. Kelly provided the illustrations for the second edition of Read’s novel The Green Child in 1945 and Read reciprocated by writing the introduction to Paintings by Felix Kelly published by the Falcon Press in 1946. But instead of becoming a member of mainstream British modernism (like his older compatriot Frances Hodgkins), Kelly cultivated an entirely different clientele and painting speciality – the aristocracy and paintings of their country houses.

His career would develop to include theatre design, interior decoration, and murals not just in Britain, but in the United States and elsewhere. Like many gay men with sensitivity and charm, Kelly sought the company of like-minded individuals for whom sexual orientation was not a topic for discussion lest it ‘scare the horses’. In a time when homosexual acts between consenting male adults were still illegal, the relative tolerance of British high society became an understandable refuge.

Stylistically, Kelly’s paintings are difficult to pigeonhole. There are elements of surrealism reminiscent of Max Ernst and Salvador Dalí and of the metaphysical Italian painter Giorgio di Chirico. Then, he shares certain similarities with the English neo-romantics such as John Piper, Eric Ravilious, and Graham Sutherland. In his murals, he was identified as the successor to the society painter Rex Whistler. Given his chosen speciality, architecture features prominently in Kelly’s paintings. But even when he is depicting a specific house and location, his paintings are rarely merely descriptive. He almost always invests then with elements of the whimsical, the bizarre, and the surreal.

The Georgian Lindridge House is shown in a great park. A giant cedar hovers on the left while fallen branches from a dead tree provide a sinister contrast on the right. The painter has introduced an 18th-century conceit of the artist’s easel and paint box and a Kelly signature element of the candy-striped folding stool in the right foreground. Two diminutive figures stroll across the park towards the house in the middle ground. Kelly received many commissions for such subjects from landed and aristocratic clients who could no longer afford the upkeep on their houses and who were often obliged to abandon them or hand them over to the National Trust. Lindridge House met its fate in a devastating fire in 1962. Kelly’s painting, dated 1965, must have been based on earlier photographs and sketches, perhaps done when the house was owned by the theatre director Michael Benthall. Benthall, the partner of ballet dancer and choreographer Robert Helpmann, was artistic director of the Old Vic Theatre between 1953 and 1962. Kelly was the set designer for the Old Vic production of The Merchant of Venice in the 1960-61 season. Benthall was a long-time friend of the actress Vivien Leigh and of her then husband, Laurence Olivier. Kelly painted a view of the Oliviers’ country retreat, Durham Cottage, that was exhibited in London in 1956. A photograph of Durham Cottage taken by Kelly in 1954 is included in the archive of Kelly material at Te Papa. 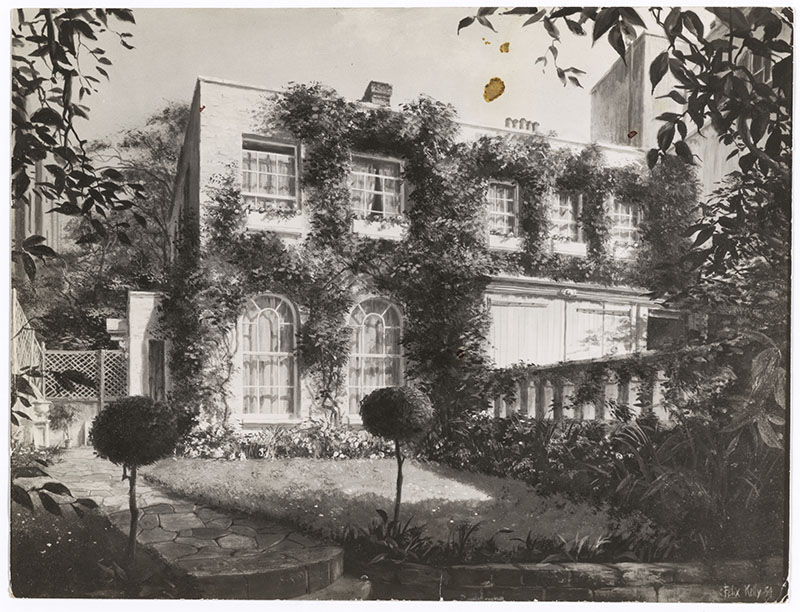 Kelly’s work as a designer of theatre sets began in 1953 with a production of N.C. Hunter’s A Day by the Sea directed by John Gielgud and starring Gielgud, Sybil Thorndike, and Ralph Richardson at London’s Haymarket Theatre. Prior to its London debut, the play was tried out in Liverpool. It was while there that the news broke of Gielgud’s conviction and fine for ‘importuning’ in a public lavatory in Chelsea. Fearing the effect of this public humiliation on the newly minted knight’s acting career and the current production, Kelly wrote to Gielgud in support. Gielgud replied, ‘So awfully kind of you to write – I can never forgive myself for so imperilling all our happy work together.’ [1] Gielgud was paralysed by fear before curtain up, but his co-star Sybil Thorndike grabbed him whispering, ‘Come on John darling, they won’t boo me’ and led him onto the stage where he received a standing ovation.

It was as a decorative muralist that Kelly produced his largest scale works. Following in the tradition of Rex Whistler, Kelly received commissions for murals from both public and private clients. In 1962, Kelly produced two large murals for main deck entrance of the Shaw, Savill & Albion ocean liner Northern Star. They are now in the Southampton City Museums.

At nearly three metres across and over a metre high, the murals depict fantasy panoramas that relate to the ship’s habitual route from Britain to Australia and New Zealand via South Africa. Kelly has used the device of the capriccio, popularised by Old Masters such as Claude Lorrain and Canaletto, which juxtaposes recognisable landscape or architectural forms in unexpected and unrealistic combinations. In one of the murals, Old Government House, Sydney is positioned on the left while Auckland Harbour’s Rangitoto Island sits on the right connected implausibly by the Sydney Harbour Bridge. Kelly’s signature candy-stripes decorate the folding stool and the canvas canopy. New Zealand’s distinctive native flax invades the right foreground. Nearly 30 years after Kelly left these shores, the memory of his youthful home continued to sustain and inspire him.

David Maskill was a senior lecturer in Art History at Victoria University of Wellington from 1993-2019. He is a specialist in French art of the 18th century and the history of prints. He has published articles in Print Quarterly, Journal18, and the Journal of New Zealand Art History.