Art historian Joanne Drayton explores the unconventional life of painter Frances Hodgkins, arguing that absence of evidence is not always evidence of absence.

Frances Hodgkins (1869-1947) rarely pictured herself. When she did, most famously, it was as an apparently random collection of objects. There are things in Still life: Self-portrait (about 1935) that reflect self, and items that connect to an accessorised self. Meanwhile, the artist who composed them slips from view; enigmatic and unfathomable. Hodgkins is there in the metaphor and the accoutrements of femininity: a high-heeled shoe, handbag, mirror, beret, belt, and scarf. But she is also invisible. Missing from the work. The title cleverly confounds our expectation. This is not a representation of self. It is an expurgation. 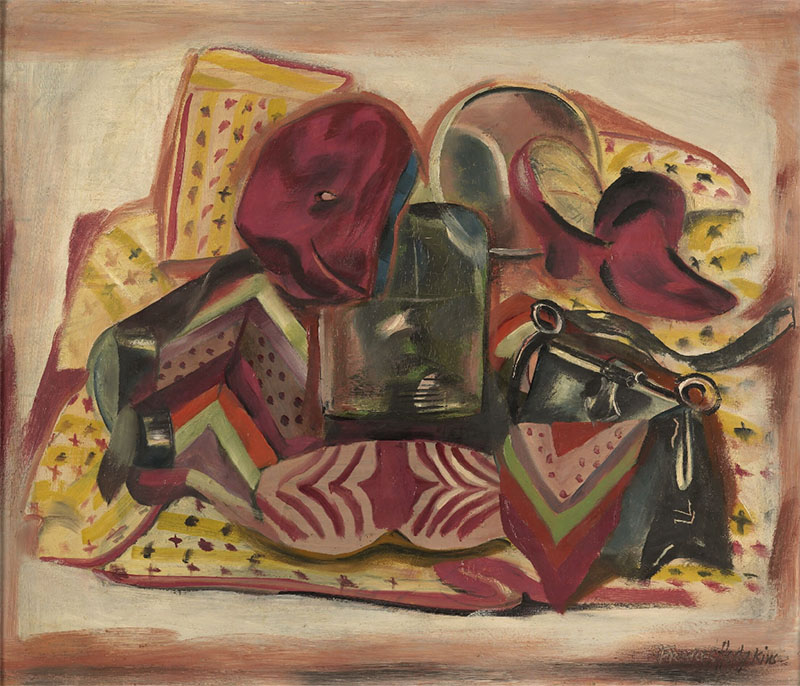 The absence of Hodgkins’s body from Still life: Self-portrait does not for a minute suggest that she didn’t have one. We are happy, in fact, habituated, to make a forensic read of the objects, patterned and swirling, as evidence of a creative life. Her artistic decision making is not questioned. What is there is enough.

Why, then, when it comes to Hodgkins’s sexuality must we have ‘the record’ of a body in bed; a ‘smoking-gun’ (as the euphemism goes); a letter of confession? The apparent absence of a same-sex partner has been taken as conclusive evidence that there never was one. Though, as we know, ‘absence of evidence is not evidence of absence’.

There is in Hodgkins’s life, however, evidence of an unconventional existence, supported, populated, and propelled by a roll call of LGBTQI+ people, including: Jane Saunders, Hannah Ritchie, Amy Krause, Dorothy Selby, Arthur Lett Haines, Cedric Morris, Norman Notley, David Brynley, Geoffrey Gorer, Christopher Wood, Philip and Lady Ottoline Morrell, Duncan Grant … and many more. While this is not proof that Hodgkins was a lesbian (if that should even be necessary), it signals an openness to a queer world – its people and their relationships – that makes for a fascinating investigation. 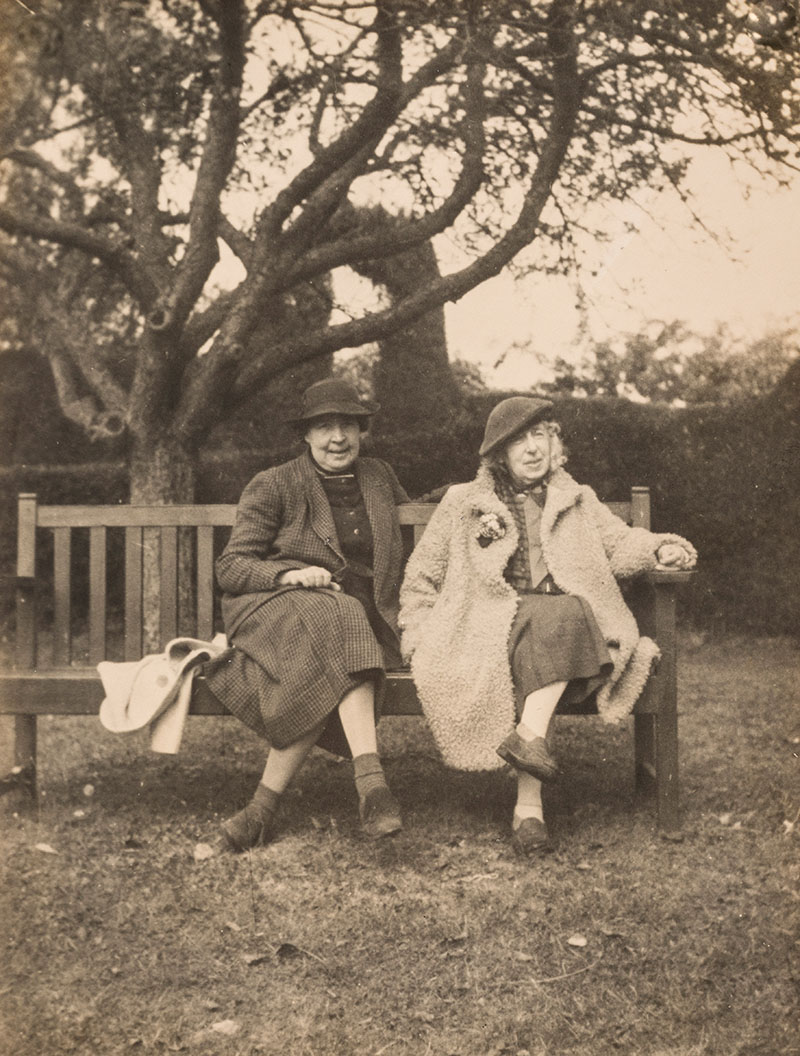 There is a high-heeled shoe in Still life: Self-portrait and its companion piece Self portrait: Still life (about 1935), that was still in Hodgkins’s studio at Corf Castle when she died in May 1947. The shoe was there among ‘the scraps of pink feathers, bits of ribbon, lots of old rubbish’, and drawings that Hodgkins’s executor, Dorothy Selby, and other friends cleared out.[1] The majority of the women who cared for Hodgkins in her last days, who brought the wreath and placed it on her coffin as it slid back behind the crematorium doors, were lesbian. They were her intimates: her closest friends.

After four days hard work in Hodgkins’s studio, friend and companion Amy Krauss wrote a poignant note finalising her effects. ‘I have helped with her few possessions & Dorothy [Selby] & I did all the preliminary sorting of boxes and of letters,’ she explained to Hannah Ritchie.

Will you ask Jane [Saunders] if she sent two night dresses to the Hospital from Swanage—Dorothy had two made & one of hers came back with her clothes & she might have been cremated in the other. If Jane sent two I will post them back to her. What a business it is dealing with someone else’s things with all her relatives so far away.[2] 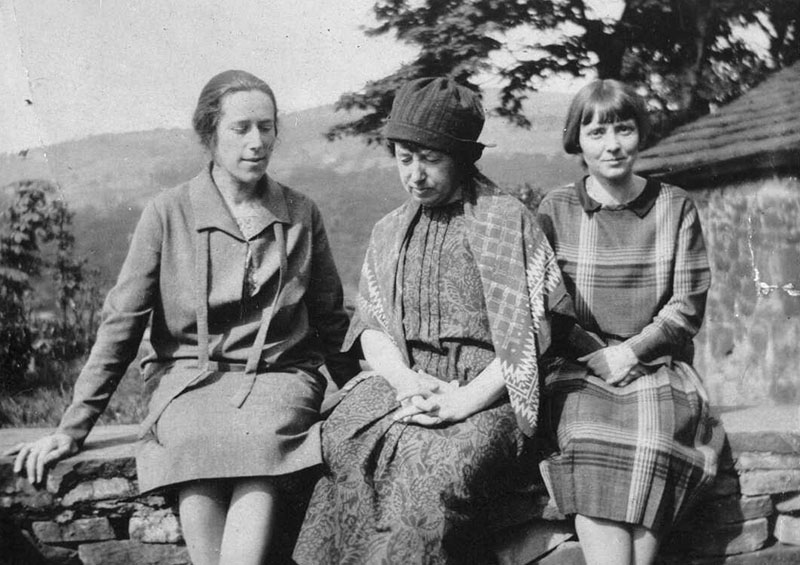 But this was not the only help Hodgkins received from her circle of women friends. In the early-to-mid-1920s, she lived off and on with lesbian partners Jane Saunders and Hannah Ritchie. These were desperate years for Hodgkins. Ritchie and Saunders housed and fed her, and gave her financial support in the form of an allowance. When Hodgkins was seriously thinking of returning to New Zealand, they gave her reason to stay in the United Kingdom. In January 1923, Hodgkins penned a letter to Ritchie.

To a large extend I have lost my terror—thanks to you— & time I hope will prove that it pays to put me on my legs again & make me a busy useful woman … whose best work is ahead of her—You two girls have had the courage & imagination to do what other richer friends could have done twice over without turning a hair.[3]

Ritchie and Saunders, both students of Hodgkins since 1911 and 1912, drew her into their milieu of influential literary and artistic friends. Their network included Forrest Hewit, chairman of the Calico Printers’ Association who helped her secure a job as a designer on a salary of £500 a year. The job-offer came just a month before Hodgkins was due to return home to New Zealand and changed the course of her life forever.

Hodgkins knew Ritchie and Saunders were same-sex partners and was comfortable discussing the intrigues of lesbian love. After the pair separated, she wrote to Dorothy Selby of the disappointment of a subsequent love interest for Jane:

Jane’s girl friend aged 40 has gone off to Italy with a younger girl friend aged 20. One of those infatuations difficult to explain & and disastrous in its reactions. Jane, however, is behaving well—having done all she humanly can to save the situation has now faced up to it ...[4]

Many of Hodgkins’s closest male friends were gay. Geoffrey Gorer, Eardley Knollys, David Brynley, Norman Notley, and Duncan Grant are numbered among them, as well as Cedric Morris and Arthur Lett-Haines, a gay couple, who became a mainstay of emotional support and financial assistance.

Morris and Lett-Haines began their association with Hodgkins in 1919. They paid her tuition fees, sub-leased her London flat when its cost became too onerous for her, and hosted her at their country home. When Hodgkins’s fortunes dipped to one of their lowest points, they were her salvation. Lett-Haines remembers, in an interview with June Opie (1969), that:

… she was in a basement at the junction of Fitzroy Street and Charlotte Street, and the water and light were turned off and she had pawned everything that was possible, and I think that she had abandoned herself, covered in newspapers … in bed …I gathered her together and motored her down to the Pound and fitted her up and set her to work.[5]

They also used their network of contacts to promote Hodgkins’s career forward. Cedric Morris nominated her to be a member of the progressive Seven and Five Society. She showed with them for the first time in March 1929. The Society’s membership included some of the biggest and most influential names in British modernism. 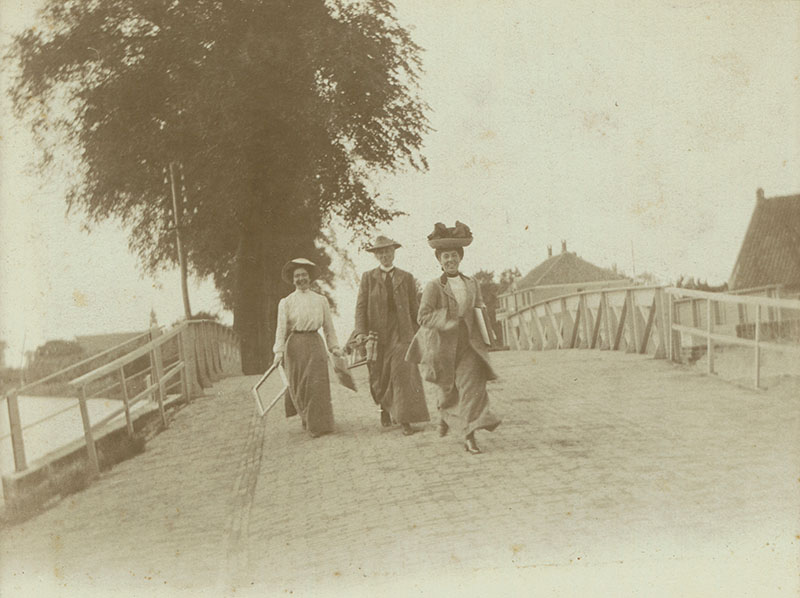 Frances Hodgkins had a number of intimate female friendships. In her later years they included Amy Krauss then Dorothy Selby, but when she was younger her passionate friendship was with Dorothy Kate Richmond. In 1901, Hodgkins joined Richmond at an artist colony in France. To her mother, Rachel, she wrote:

I found Miss Richmond already installed when I arrived and winning all hearts by her sweetness & beauty … I am a lucky beggar to have her for a travelling companion. She is so restful & sweet and I think we suit each other well.[6]

Eventually her feelings of exhilaration in Richmond’s company became palpable:

I have grown so fond of her, I don’t know how I am ever going to let her go, she is one of those people whom you want always with you. This kind of existence is too too happy to last.[7]

Sadly, Hodgkins’s prediction would come true, and they would part. Hodgkins, to continue her career in the sketching grounds of Europe, and Richmond, to return to New Zealand and stay there. The tragedy is that this outcome was due largely to miscommunication. Hodgkins wanted Richmond to join her in Europe, but didn’t feel she could ask, and Richmond was waiting for Hodgkin’s invitation to join her. The outcome was that they would remain apart; something they both regretted.

Of her life in Nelson, Richmond would write to Frances:

I sit [and paint] in ploughed fields with my shoes full of earth … The evenings I have devoted to sitting beside large fires … when I am reading I forget who I am and that I ever tried to paint … [she finishes] Tell me anything you can and never stop loving your devoted friend.[8]

Hodgkins’s career has been interpreted literally, sanitised and demystified. According to convention, she eschewed the wasteland of spinsterhood to become an artist, thereby draining every pulse of passion (except for art) from her veins. But clearly there is also evidence of another, more complex and unorthodox life. A queer life filled with queer people who loved her and she loved them. This world reflects an important aspect of Hodgkins’s ‘self’, in the way that the high-heeled shoe, handbag, mirror, beret, belt, and scarf reflect significant aspects of her ‘persona’. Hodgkins was a manipulator of minds – a visual conjurer – too elusive to be framed in her own portrait and too clever to be caught outside her own closet.

Joanne Drayton (PhD) is an award winning New Zealand author. Her most recent book Hudson & Halls: The Food of Love won the Ockham NZ Book Awards for Non-fiction in 2019. Both Hudson & Halls and her earlier book The Search for Anne Perry and have been optioned for feature films. Her other biographical subjects include crime writer Ngaio Marsh and expatriate painters Frances Hodgkins, Rhona Haszard, and Edith Collier. She has curated exhibitions and publishes in art history and theory. In 2007, she was awarded a National Library Fellowship, and in 2017 the prestigious Logan Fellowship at the Carey Institute in Upstate NY.