A handshake, a quilt, the living

Artist Owen Connors and art curator Simon Gennard discuss the influential role that the New Zealand AIDS Memorial Quilt has played in their work as a marking point in a trajectory of queer history.

In literary theorist Eve Kosofsky Sedgwick’s essay ‘Making Things, Practicing Emptiness’ – a wild, sprawling text which covers the author’s textile practice, her experience of cancer, her journey into Buddhist thought – she introduces her idea of the ‘weaver’s handshake’. For Sedgwick, a ‘weaver’s handshake’ denotes a greeting particular to those familiar with fabric; a mode of introduction that abandons formalities in favour of a ‘tactile interrogation of what you’re wearing.’[1]

To engage in a weaver’s handshake is to surpass the clasping of hands; to grab at a sleeve, to pinch a button or a brooch, to admire some piece of detailing or finery. For us, Sedgwick’s term conjures a world of queer encounters. To look and to touch in such a way is to seek out potential accomplices. It’s covetous, familial, and promiscuous, and asks, without asking, what skills, techniques, and flourishes have you learned – in weaving and in life – how closely do these things resemble what I know; what might we have in common; where might our edges meet?

This term proposes a way to begin thinking about the New Zealand AIDS Memorial Quilt. An enormous, and ongoing, community art project, the Quilt Project was initiated in 1988, following the lead of the American Names Project Quilt, with the creation of a panel dedicated to Peter Cuthbert, who had died from AIDS-related illness that year. Since then, the quilt has grown to include 139 panels made by the friends and family members of those who have lost their lives to AIDS-related illnesses in Aotearoa. 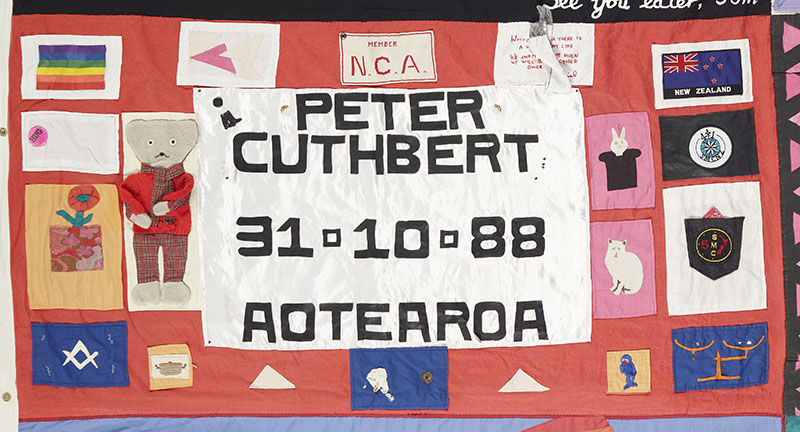 The quilt is structured in such a way that each panel, bearing the name, or in some cases multiple names, of individuals who have died of AIDS-related illnesses is stitched together, side by side like pieces of a puzzle, largely in groups of eight to form ‘blocks’. Bound together in this way, these blocks collectivise individual experiences of death and have come to play an important role in the fight against HIV and in LGBTQI+ history.

Beginning as a tool of remembrance and grieving for those who lost loved ones to the virus, then from 1991-1996 the Quilt travelled around Aotearoa, educating both in regards to HIV and playing an important role in the humanising of queer lives in the years following the Homosexual Law Reform of 1986, rubbing the edges of intolerance with stitches of feeling.

As Darren Horn wrote in 1992, ‘All the quilts speak of love, compassion and memories. Each is composed of recollection, sadness, acceptance and letting go. The quilts help us to learn and accept. They are a guide to the future of coming generations.’[2]

We were both born in the early 1990s. The two of us have approached the quilt in our respective research in different ways. We’ve patched together a queer history of our own – with what happened to be at hand, to serve the purpose we needed it to at the time; each of our histories differ in places, meeting in others. The Quilt has played an influential role in both of our work – as a marking point in a trajectory of queer history, a meeting point for many ancestors in a local queer family tree, an example of the campy, joyful uses of political rage, and a rich tapestry of the possibilities of queer world-making and cultures of care. 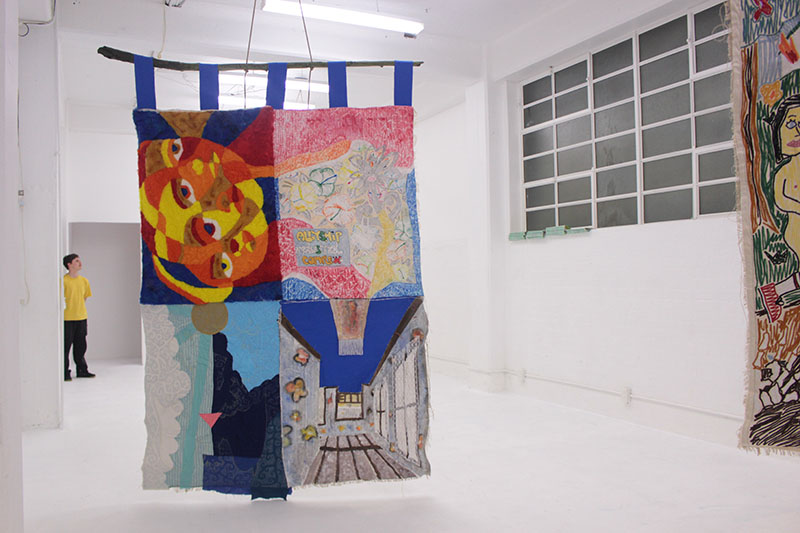 The quilt itself presents a plethora of aesthetic trajectories and experiments with the craft that have developed from the medium’s urgent employment. Alongside the detailed machine quilting manoeuvres from professional artists and craftspeople, and the apt employment of traditional techniques often attributed to mothers and sisters we find deviations from the craft; direct painting and drawing on textile rather than complicated applique, laminated photographs, album covers and printed poems wrinkled by time and the assumptions of folding; socks, dresses, stuffed scissors and teddy bears bulging from panels.

It is work that calls for something like Sedgwick’s ‘tactile interrogation’ beyond the awe of labour and craft. Each investigation of its formal arrangement, its mechanical construction, is an investigation of making do, making symbols stick to a medium its makers may be unfamiliar with. The admiration of this ‘detail’ or ‘finery’ which comes with physical engagement of the quilt quickly morphs, for us and for others, into an admiration of its makers; queer survivors, allies, and mourners.

The quilt as storyteller

Despite this tactility, our most intimate experiences of the quilt have been digital. Conservation of the quilt has involved both lodgement with the Te Papa in 2012 and digitisation of each panel to maintain access whilst preserving the often fragile materials.

But the quilt is not simply an object. The archive that accompanies it is a fundamental part of the project. Alongside many of the images of the panels online are stories of those remembered, tributes from friends and family members.

Quilting has always been a means of storytelling – whether intended to index family lore, icons of regional or nationalist dedication, or scraps of fabric left with no better use. The stories which accompany the panels are at times heart-breaking, immediate, poetic, or unadorned. They provide a means of unpacking the iconography stitched into panels; a means of communicating where fabric alone cannot.

We learn through these accompanying texts of what makes up a life, the elements reduced to symbols on the quilt are fleshed out and become quotidian passions that ripple devastatingly in death’s denial. 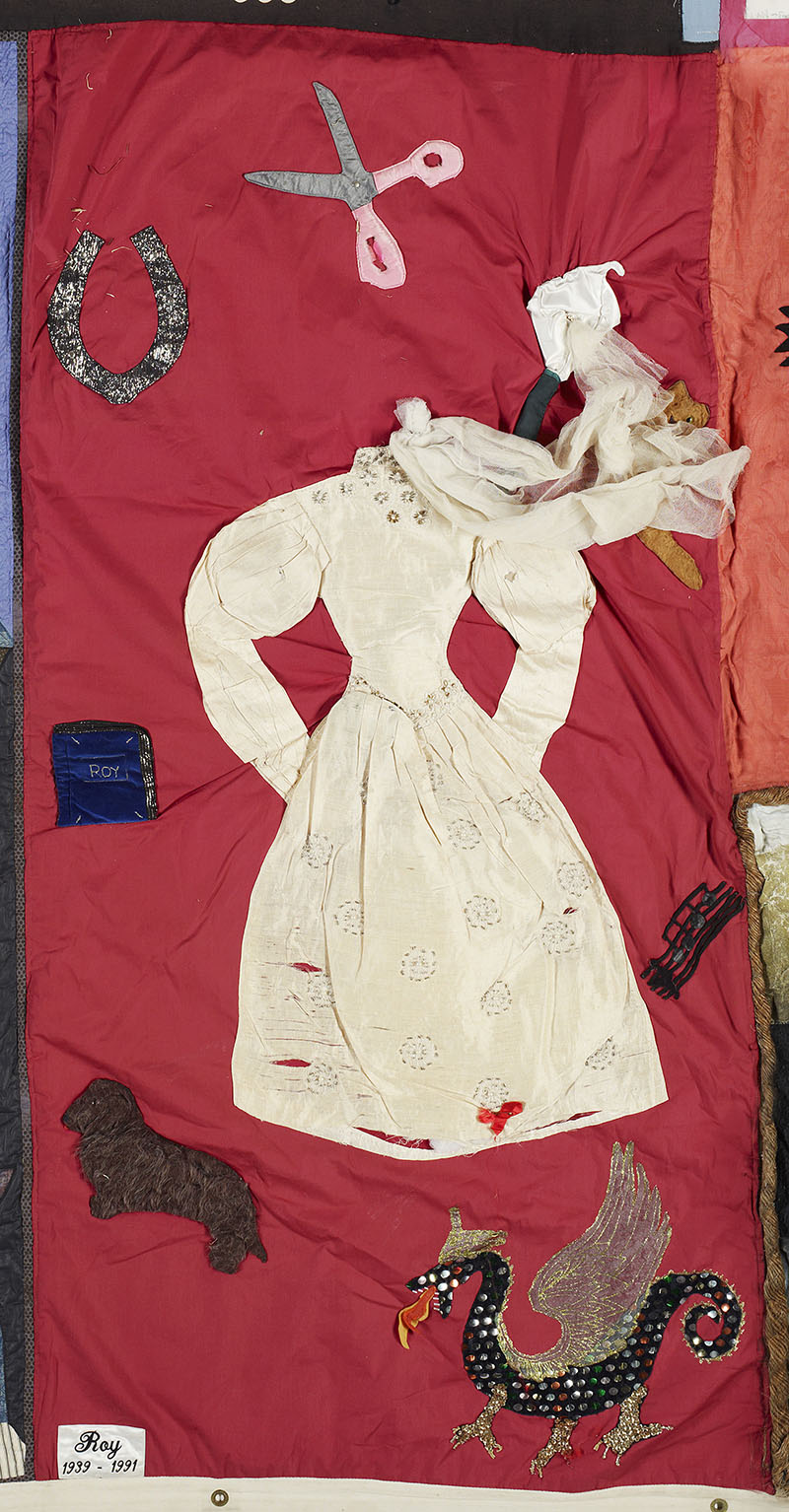 We learn, for instance, that the white gown which dominates the panel dedicated to Roy William Ormsby is a reference to his career as a dressmaker. In their text, Roy’s sisters write, ‘How does one assimilate a love of history, a flair for colour and an acquired skill as a bag-maker? Become a designer of gowns.’[3]

We learn that the photograph in the bottom right-hand corner of Neil Costelloe’s panel depicts Costelloe being arrested during a Homosexual Law Reform rally, and that the photo was printed alongside his obituary in Pink Triangle magazine.[4]

We learn that the two halves of Shane Austen Reid’s panel – the left side featuring a black cat, basking in the sunlight beneath a pōhutukawa tree, in front of a tranquil sea, the right side featuring a stacked man in only a cap, boxer shorts, and sneakers prancing alone under the moon – represent the double life Shane was forced to live. His friends, his cousin Tania and his mother write of the pōhutukawa honouring his Māori heritage, his love of Christmas, his love of dancing, and his love of his cat, Mercedes. They also mention his time in the Navy, the way he was ‘different things to different people.’[5]

Some passages read like eulogies describing ‘bubbly’, ‘sensitive’ and ‘lively’ individuals while others remain blank, as the Waikato volunteers panel suggests, waiting for ‘the day when the fullness of their lives and accomplishments can be proudly proclaimed.’ 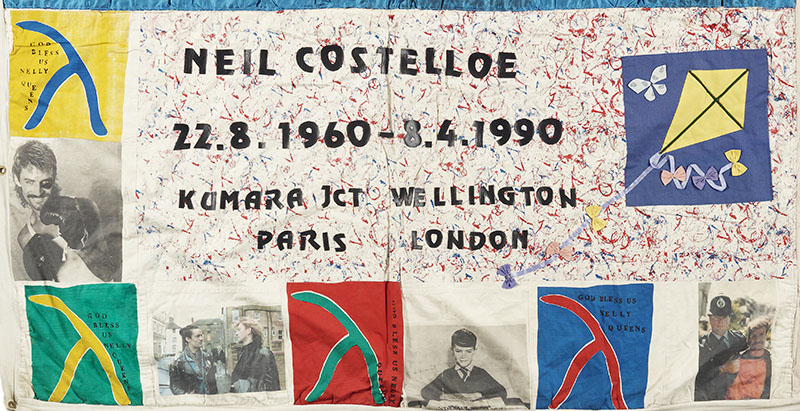 It is through our individual experiences with the quilt, exploring queer and viral ancestry, experimental aesthetics and their employment for care, rage and education that we have come to learn that the importance of the quilt lies in its advocation for living. It is indeed a record of mourning, a record of the idiosyncrasies of those remembered, but it advocates as well for knowing one another, for holding family – whether biological or selected – close at hand, for knowing what makes living important.

We have learned from engagement with this quilt to embrace our friends and lovers, to see one another as textured, to thirstily lap up life and to do so aware of its importance for those to come. It is here we can fully grasp the relevance of framing our contemporary engagement with the quilt as a ‘weaver’s handshake’ – an opportunity to make contact with those who have come before us, those who live now, and those who will live. As Sedgwick articulates, ‘[...]that gesture of the ‘weaver's handshake’ seems to epitomize not only a mode of perception, but a contact with the nub of reality itself.’[6]

Owen Connors is an artist and writer currently based in Tāmaki Makaurau. They are a co-facilitator of neo gracie, an artist run gallery operating alongside Samoa House Library and co-editor of hard press. Recent exhibitions include Children of Neck and None, Mayfair, 2020, SISSYMANCY!, play_station, Pōneke, 2019, and Fool for a World that will End, Mother?, Tāmaki Makaurau, 2018. Some of their writing has been published through Artspace Aotearoa, The Pantograph Punch, Matters Journal, and Compound Press.

Simon Gennard is a writer and curator based in Pōneke Wellington, Aotearoa New Zealand. He is currently Assistant Curator at Enjoy Contemporary Art Space, Pōneke. Prior to this, he co-facilitated MEANWHILE, an artist-run initiative in Pōneke and was the 2017 Blumhardt Foundation Creative New Zealand Curatorial intern at The Dowse Art Museum, Te Awakairangi Lower Hutt. Gennard holds a Masters in Art History from Victoria University of Wellington and his writing has appeared in publications including: Reading Room, Art + Australia Online, The Pantograph Punch, and Art New Zealand.

Explore Sleeping Arrangements, an exhibition at the Dowse Art Museum curated by Simon