A history of pride in Aotearoa New Zealand

Historian Will Hansen explores the origins of pride in Aotearoa New Zealand, and documents tensions between celebration and protest, and at times, the necessity for both.

From hard-won political campaigns to the everyday act of walking proudly down the street, from the ancient love of Tūtānekai and Tiki to the passionate participation in #ourmarch today, New Zealanders of diverse genders, sexualities and sex characteristics have embodied pride in a myriad of ways throughout our history. 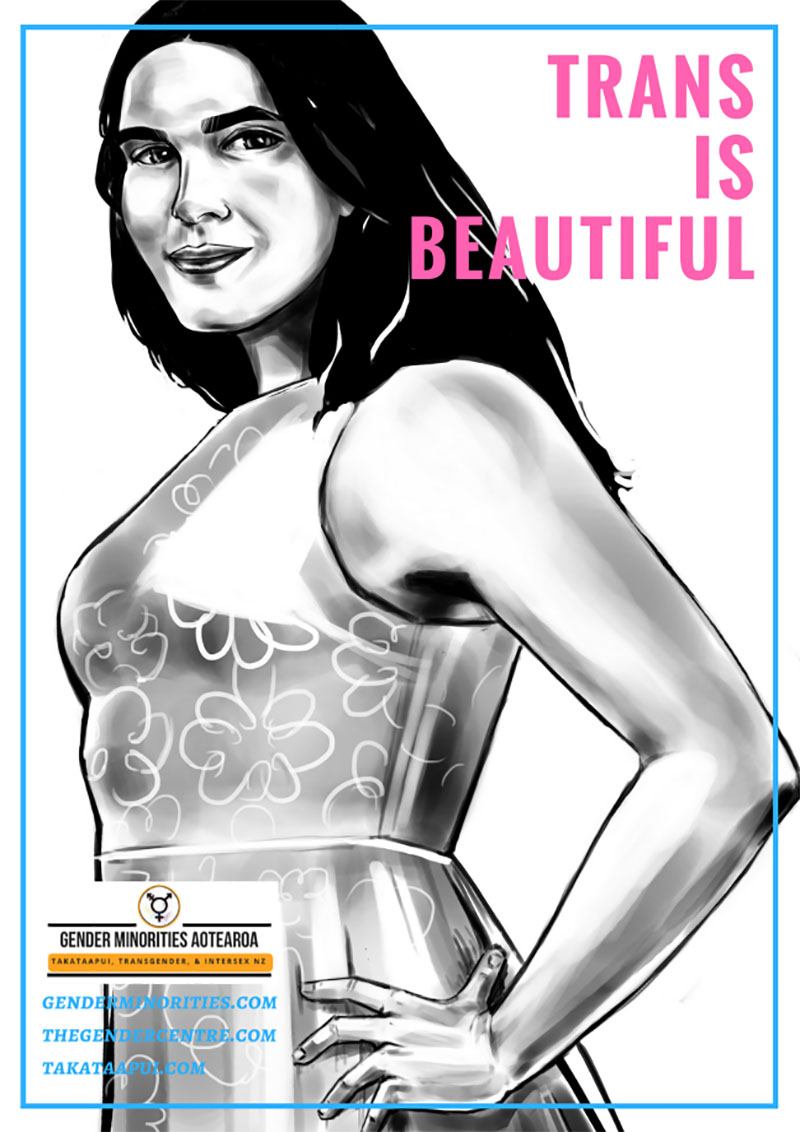 The beginnings of local pride

Although the Stonewall riots of New York in 1969 are often referred to as the “first pride”, to label Stonewall as that which kicked things off in Aotearoa is to ignore our very own radical history![1] Aotearoa was home to both informal and organised networks of queer community well before 1969; community lay the foundation for our pride. Queer people have always formed bonds of kinship and whanaungatanga in resistance to the powers which strove to invisibilise them, relying on one another for support, safety, love and pride.

Lesbian and Māori rights activist Ngahuia Te Awekotuku catalysed gay liberation in Aotearoa. In March 1972 she was nominated to study abroad in the United States, planning to research American gay liberation and Red Power. Her visa however was stalled on the grounds of ‘sexual deviance’. Infuriated, she gave a rousing speech to students at the University of Auckland, challenging them to be open about their homosexuality: “who out there is crazy enough to join me – and let’s start gay liberation!”[2]

‘Gay Day’ was Aotearoa’s first pride, kicking the movement off with a “public and provocative” start.[4] In April 1972, activists gathered under Albert Park’s statue of Queen Victoria in Auckland, chanting ‘Will Victorian morality ever die?’ while onlookers jeered. It was broadcast on television; for Chris Carter, this meant coming out publicly for the very first time. Although this caused strife between Carter and his loved ones, he explained that it was worth it because it “was the catalyst that got everything out into the open".[5] In 1993, he would go on to become New Zealand’s first out gay member of Parliament. 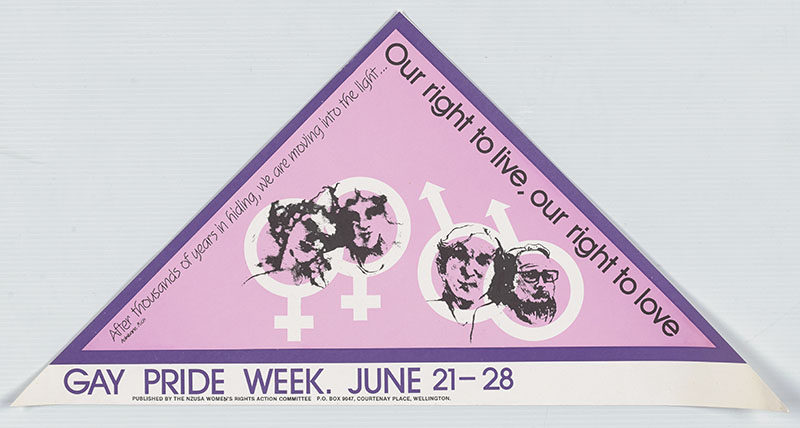 “After thousands of years in hiding, we are moving into the light ... Our right to live, our right to love. Gay Pride Week June 21–28"

The politics of pride

By the mid-1970s several gay liberationist groups had formed. Unlike earlier gay organisations, liberationists did not focus specifically on law reform, instead seeking to “liberate their own kind in every way possible”.[6] Liberationists were often viewed by their more conservative counterparts as too aggressive and idealistic.[7] There were heated debates between conservative and liberationist groups particularly around the legal age of consent, the former seeking to gradually change the law and the latter accepting nothing less than full equality.[8] 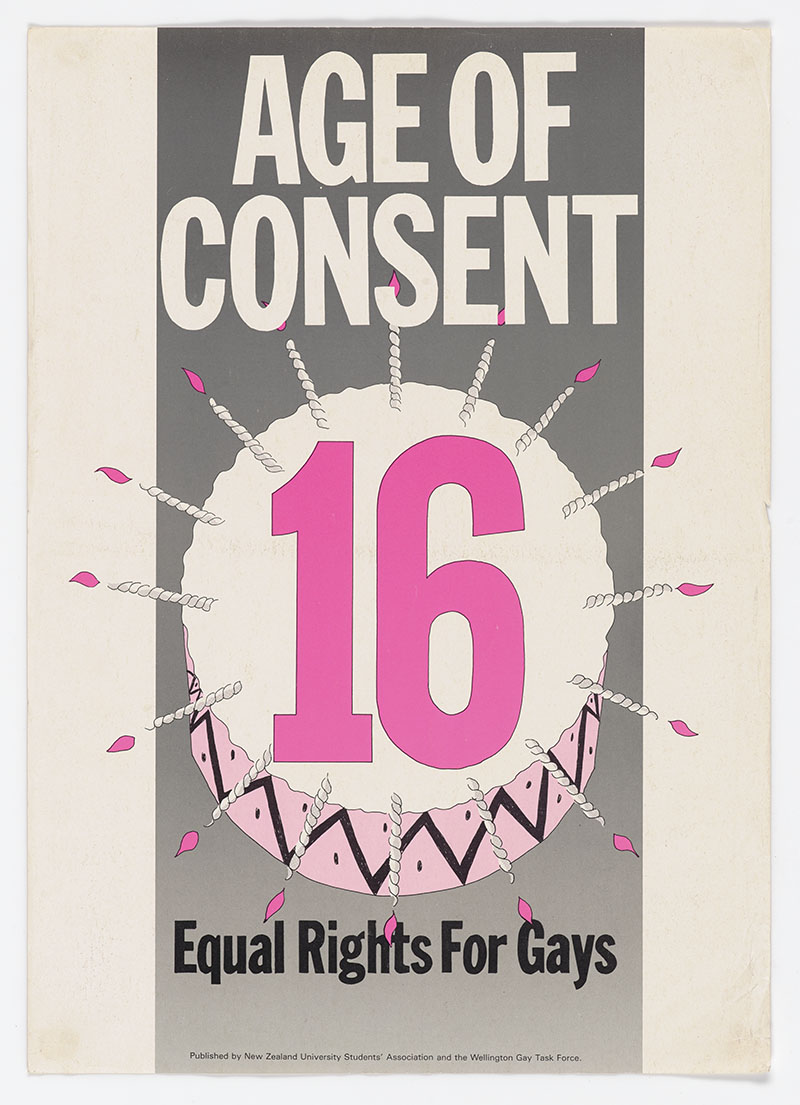 Despite such differences between groups within the broader movement, by 1977 the National Gay Rights Coalition (NGRC) had formed, with an alliance of 35 member groups and an affiliated membership of over 70,000 individuals.[9] They pushed for liberation through a variety of protests and workshops; one NGRC pamphlet even advising that activists should make a habit of phoning in to radio stations with song requests that were obviously from one gay lover to another.[10] The idea was saturation – make it so that no one could ignore gay liberation. 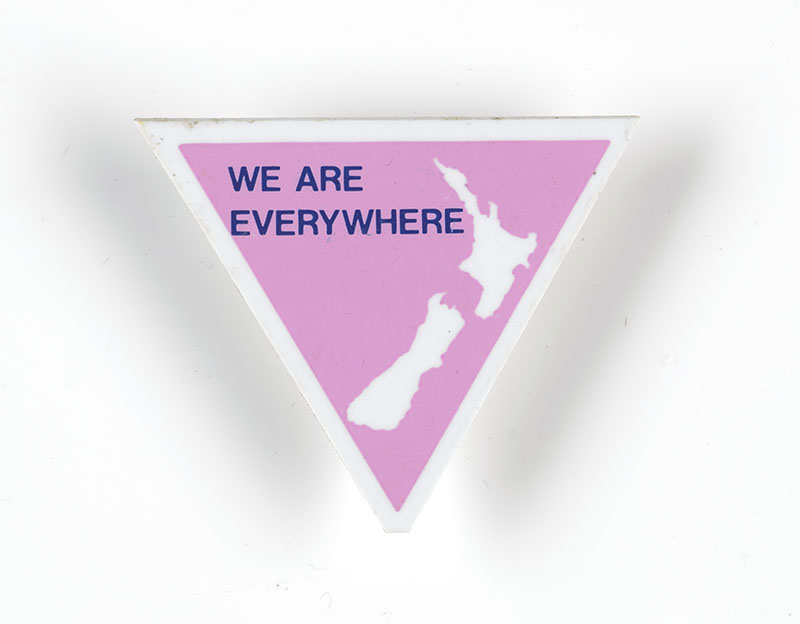 We Are Everywhere badge, about 1979, by National Gay Rights Coalition, New Zealand. Gift of Lesbian and Gay Archives of New Zealand, 2017 (GH025206)

Yet internal fragmentation challenged the movement. It is crucial to note that fighting for gay liberation would have been impossible without women, gender minorities, and people of colour. Gay organisations were however dogged by sexism, racism, transphobia, and classism in various ways, and this has meant that many groups were marginalised from the mainstream movement.[11]

Activists were met by vicious external challenges. A key moment in the debate was the nationwide anti-reform petition delivered to Parliament in September 1985 by the Coalition of Concerned Citizens. Though billed as ‘New Zealand’s largest petition’ it included many signatures which were duplicated, forged, or faked – even Mickey Mouse purportedly signed it! The petition was rejected, though heated opposition did not die.[12] 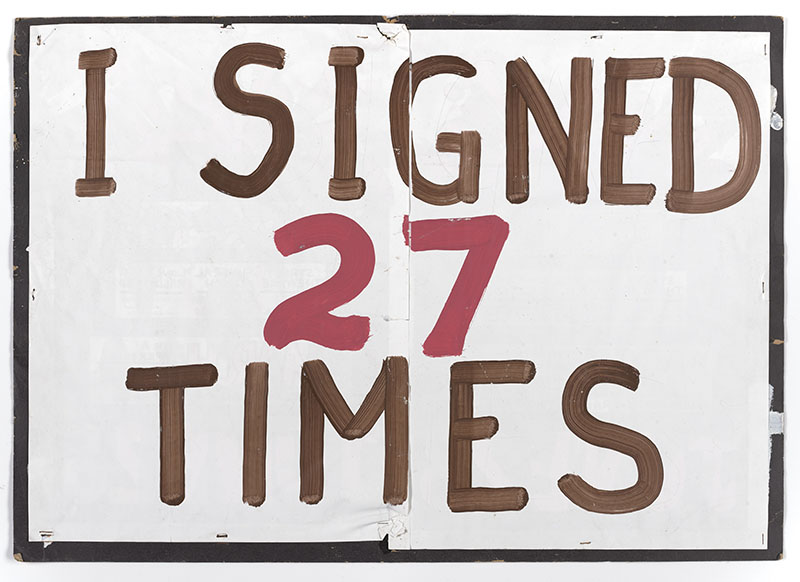 Despite opposition, the Homosexual Law Reform Bill was narrowly passed in July 1986. However, the hard-won victory was only partial, as the second part of the bill, which would have removed discrimination on the basis of sexuality, was rejected. 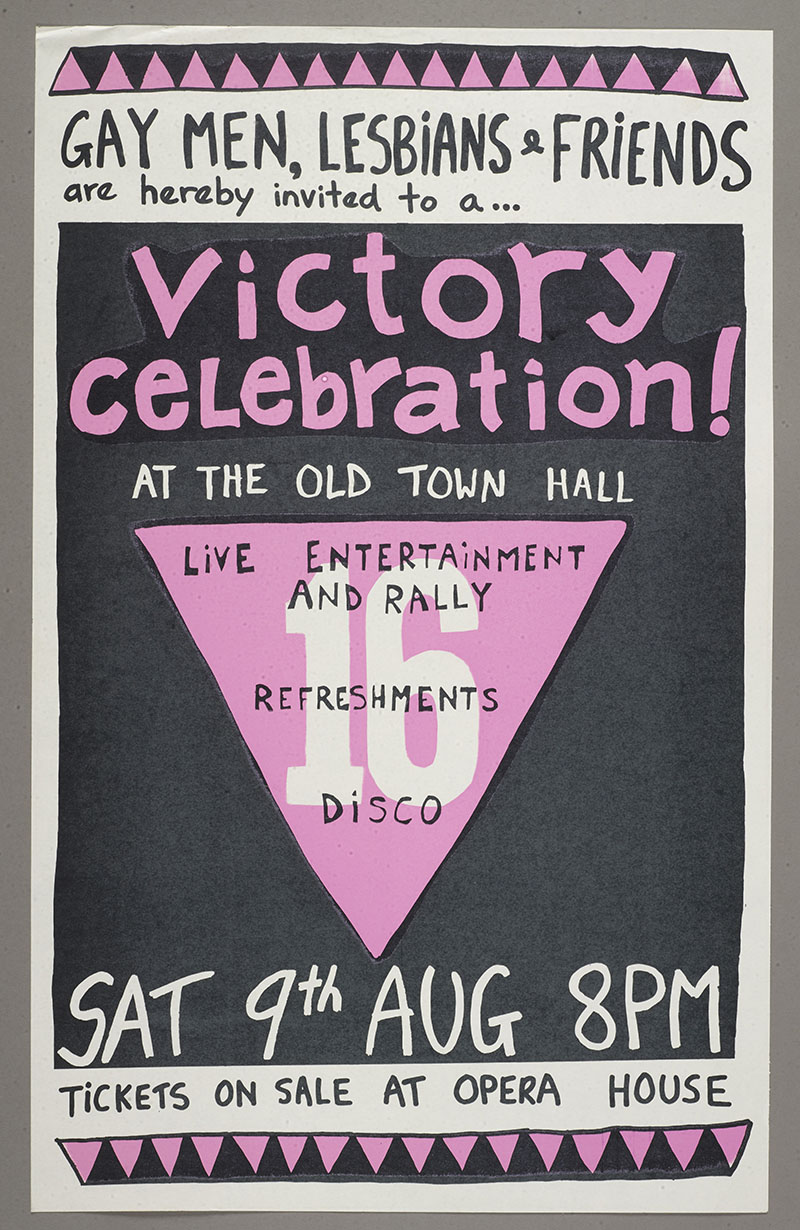 After 1986 pride festivals and fairs flourished, kicking off with Wellington’s Gay and Lesbian Fair and including Devotion, Pride, Freedom, Hero and Big Gay Out, not to mention various smaller affairs throughout the country. Many of these festivals came as a response to the AIDS pandemic; a way to come together and find joy in dark times.[13]

Promoted as “a fair for a fair law” the first Gay and Lesbian Fair in 1986 was established to raise support for Homosexual Law Reform.[14] It later evolved into the much beloved annual Out In The Park fair, hosted by Wellington Pride Festival.[15] Also in the capital city of Wellington, Devotion was one of many queer dance parties held during the 1990s, a popular annual event featuring glamorous stage shows whose attendees were known as ‘Devotees’. Beginning in 1991, by the late 1990s Devotion had grown into a week-long festival and published a magazine.[16] 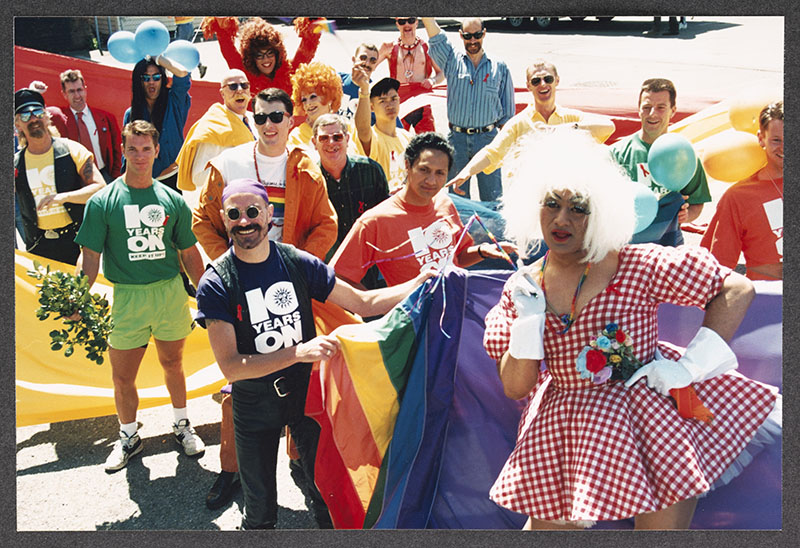 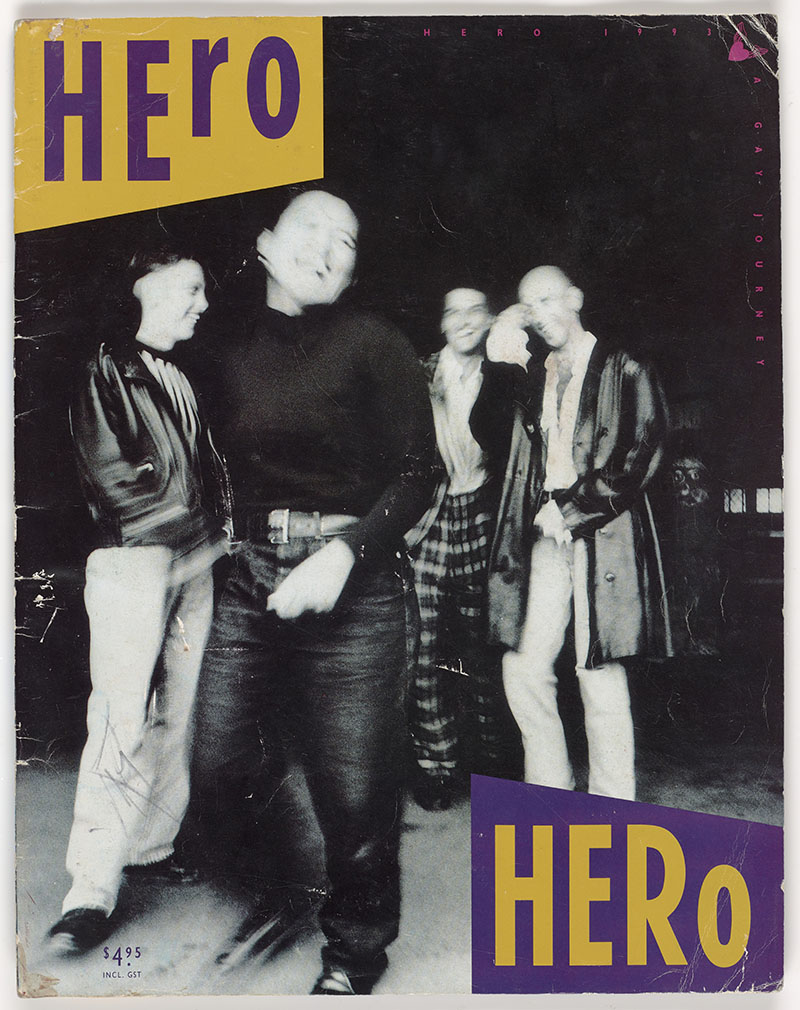 Auckland’s annual Hero festival began in 1992, featuring a flamboyant parade, dance parties and performances throughout the city. Hero intended to commemorate the heroes who were fighting against AIDS; a way to boost the community’s pride and health. Founded in 2000 as part of the Hero festival, Big Gay Out was taken over by the New Zealand AIDS Foundation in 2003 and continues to be celebrated annually, raising awareness for AIDS prevention in Aotearoa.

Hero was well attended, but it was burdened by financial issues and ended in 2001. It wasn’t until 2013 that Auckland had their next parade march – but not without difficulties. In a global trend known as ‘pinkwashing’, corporations and various government institutions increasingly showed up at pride events, replete with rainbow stickers emblazoned with company logos, after the pink dollar and the glow of being able to proclaim themselves as ‘diverse and inclusive’ despite not necessarily implementing pro-queer policies to match.[17] For example, in 2019 Fletcher Building, Placemakers, Russell McVeagh and other organisations came under fire for failing to live up to the standards a Rainbow Tick certification was supposed to ensure. Despite having received Rainbow Tick training courses – for a hefty fee – staff from all of the various organisations noted rampant and often severe queerphobia.[18] Pinkwashing is a complex issue which has caused many inter-community debates – some feeling included by the increased emphasis placed on diversity across the country, others feeling failed by tokenistic gestures, a lack of any power redistribution or meaningful change.

Pride and the Police

Police began marching in pride parades in 2015. They were met with opposition from a group then named No Pride In Prisons (NPIP), now named People Against Prisons Aotearoa. NPIP was founded with the intention of advocating for trans prisoners, and they opposed police participation in pride because of “prison and police violence statistics regarding Māori, Pacific and transgender communities”, as well as the double-bunking prison policies that exposed trans prisoners to greater risk. For trans activist and scholar Lexie Matheson, it was the first time since the 1980s that a real grassroots activist group had tried to refocus a pride event on protest instead of purely on celebration. She recalled that “there wasn’t a lot of community support for the small group of young, gender-diverse Māori activists who invaded the parade to protest ... despite protest being at the heart of our historical kaupapa, it seemed we’d forgotten where we came from.”[19]

The following year in 2016, 300 NPIP demonstrators blockaded the parade, chanting “police are violent, we won’t be silent,” and citing the abuse of transgender inmates as their primary motivator. In particular, the new policies resulting in double-bunking and over-crowding had left vulnerable inmates at higher risk of assault – the group had been in contact with two trans women in the four months prior who had both been raped while in custody.[20]

After continued NPIP advocacy and extensive community consultation, the Auckland Pride Board requested that police abandon their uniforms when marching in the 2019 parade as a gesture of solidarity. The decision caused an extraordinary stir. The Police, New Zealand Defence Force, and several corporate sponsors pulled out of the parade.

In response to this loss of financial support, the Board decided to host ‘OurMarch’. Community-led, the march reflected the original roots of protest; and, like the very first pride march of 1972, began in Mount Albert Park under the statue of Queen Victoria. The Board’s chair, Cissy Rock, explained that “#ourmarch is about making Auckland Pride a place for all of us to be visible, involved and heard...people [are] at the heart of what we do.”[21] It was a success, attracting over 3000 community members of all stripes. One Filipino Aucklander held a sign that summarised the kaupapa of the march: “If your gay pride does not compel you to protest, what purpose does it serve?”[22]

That same year, the Police, Defence Force and corporations marched in the Wellington International Pride Parade (WIPP), replete with a Light Armoured Vehicle decked out with rainbow flags. WIPP had begun in 2017, intending to showcase the diversity of the capital city and celebrate pride. Yet despite repeated requests, the WIPP Board denied community consultation. This resulted in the formation of the Wellington Rainbow Affiliation Towards Hope, an alliance of local rainbow groups who called for a boycott of the 2020 WIPP parade.[23] Despite the Affiliation voicing their concerns, the significant lack of community groups involved in WIPP, and banks boycotting the parade, WIPP continued ahead. The Affiliation instead lent their support to the separate Wellington Pride Festival, which included a Pride Hīkoi that focused on building solidarity. 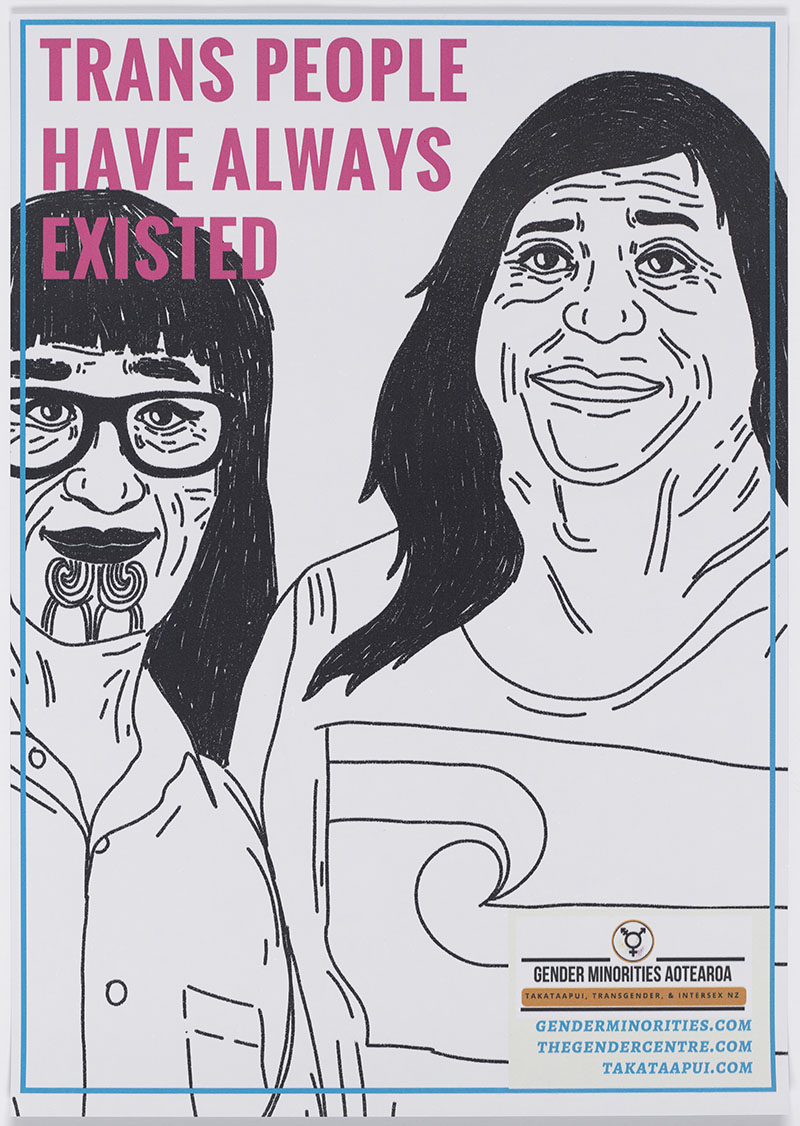 It is groups like those involved in the Affiliation, including Gender Minorities Aotearoa, InsideOUT, Tranzform, and Naming New Zealand, who stand at the forefront of the ongoing battle for queer liberation, embodying pride in their continued advocacy for queer people. With their work, and the work of countless others around Aotearoa, pride lives on.

11. For more information specifcially on the role of trans people in the gay movement, see Will Hansen, ‘“Every Bloody Right To Be Here”: Trans Resistance in Aotearoa New Zealand, 1967-1989,’ Masters Thesis, Victoria University of Wellington, 2020.

Will Hansen (he/him) is an historian, community archivist, library assistant and zine-maker based in Pōneke Wellington. He completed his Masters thesis in 2020, titled ‘“Every Bloody Right To Be Here”: Trans Resistance in Aotearoa New Zealand, 1967 - 1989’, which used oral histories to explore the various politics of resistance practiced by trans elders. As a trustee of Te Pūranga Takatāpui o Aotearoa/Lesbian and Gay Archives of New Zealand, he is passionate about preserving and sharing Aotearoa’s queer histories, connecting queer kiwis to their past. In 2019 he was a co-leader of Te Papa’s Trans Past, Trans Present: The Making Trans Histories Project.