In the late 1980s Fiona Clark created two albums of intimate photographs of four New Zealanders who had been diagnosed with HIV. While Fiona visually documented the day to day activities of Alistair, Grant, Peter, and Sherrin, they in turn contributed their own words and thoughts to the album.

Te Papa acquired both albums in 2016. Michael Stevens has a copy of the albums on his book shelf. In this essay, he reflects on living with HIV then and now.

‘I ask myself what is healing to me? Am
I healing right now? What is holding me
back? What more can I do?

‘I believe healing must be love, deep Love for
myself, Love that saturates my entire being.

‘Dietry control, visualisations, affirmations, exercise
etc are wonderful methods or tools, but in a
body without Love no real healing can occur.’

Now imagine that one by one, over a few months to a couple of years, they all get terribly, inexplicably ill. You and others spend hours trying to help them, you cook for them, you take them to medical appointments, you wash their thin, fragile, wasted bodies and their shitty sheets. You show them such great love – but one by one they die. Each death takes a piece of your heart with it. You make new friends, but the same thing happens, again and again and again. And you are not sure if you are infected with this yourself, if this is your fate as well. And most of you are still under 30.

That is what life with AIDS was like in the worst days of the plague. Except it was worse.

Vile, unfettered hateful messages in the media told us we deserved it. For some, family and friends didn’t want to be near us. At the start even doctors and nurses recoiled from touching us. Some even refused to treat us at all.

You can’t talk about AIDS in this country and not talk about sex. AIDS hit one group hardest by far, and that was gay men. We had deliberately built a culture of joyful sexual freedom. Sexual liberation was tied up with political and social liberation. Instead of being ashamed of who we were and how we fucked, we had learnt to take pride in ourselves, to come out, to stand up, to speak our truth, and to revel in our bodies.

How could something so wonderful, so powerful, so joyous, and fun as fucking now be the cause of our death? How, after the years we’d fought to get a small scrap of space in the wider world, to build our communities, and demand our rights, to struggle and learn how to take pride in ourselves instead of shame, could health and life itself be taken away from us by one of the most central aspects of who we were? The paradox was painful.

We’d been told all our lives that being gay, that desiring and loving other men, was wrong, unnatural, illegal, and sinful. And then this happens, as a direct result of our physical joy and love for each other.

I was diagnosed in 1988, when I was 27, on a visit to London. The doctor at the clinic told me I probably had two years to live and to go back to New Zealand and get ready to die. That is what she bluntly told me. I had already heard of the tide of friends back here who had sickened and died, and in tears I left that appointment, trying to understand that my life was going to end, and soon.

Back then there were no effective drugs to treat HIV. Experienced infectious disease specialists were watching a group of mostly gay men appear before them coming down with obscure conditions that they were unable to treat. It seemed like a defeat for western medicine too. Many of us turned in desperation to anything that might help. Chinese or Ayurvedic medicine. Aura cleansing. Huge doses of Vitamin C injected directly. Ozone tents. They still died.

The standard course of disease was predictable. After infection there would not be much happening for a year or two, then suddenly, things went wrong, things modern medicine couldn’t treat. Wasting was one of those conditions – we just lost weight, and strength.

In my case my weight went down to 50kgs at one point, and I couldn’t walk. Many people got Kaposi’s sarcoma, a skin cancer that was normally rare and typically found in elderly men living near the Mediterranean. I also had PCP, a usually rare form of pneumonia that killed so many of us before they figured out how to treat it. For me the symptoms started to appear when I found it hard to walk up the stairs of the school I was working in. As I got more and more breathless I realised something was wrong. I went to my GP, who sent me straight to hospital. I spent a lot of my 30s bouncing between hospital and home and hospice.

I went to a peer-support group for people living with HIV/AIDS. There were 12 of us including the two facilitators, and apart from one straight woman the rest of us were gay men. One of the facilitators died in the first three weeks. From memory, the other one died the week after our sessions finished. We spent a lot of our meetings talking about what it was like getting sick, our fears of dying, with special sessions on writing a will and planning our funeral.

Even though I’d lived past the original two years I was given, I knew I was dying. A doctor here in Auckland told me once I probably had about one year left to live. I wasn’t even 35.

HIV and AIDS in New Zealand

In New Zealand we were lucky to some extent – the government treated HIV/AIDS as a public health issue, not a moral or criminal one, and put essential support in place from the early days. But that didn’t stop the social stigma, the abuse, and the deep sense of shame so many of us felt, myself included. Still, that quiet, continued state support that continued from whichever party was in power was invaluable.

They were mostly young, my contemporaries, and full of potential, looking to build their lives, and they’re dead. And to me it now seems, all that happened to us is largely forgotten. 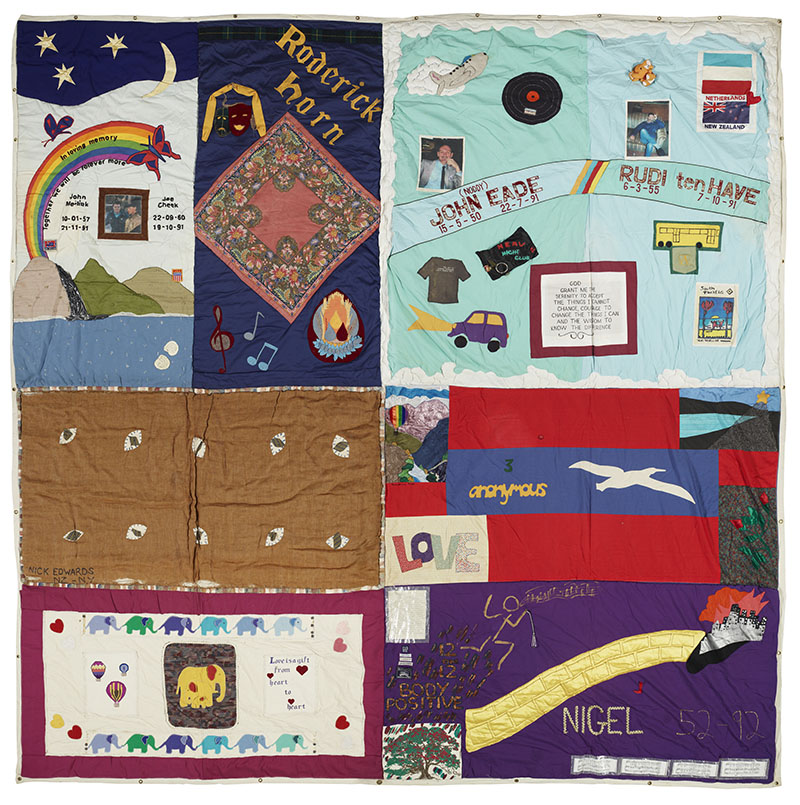 Nobody has written a definitive history of what AIDS did to the world of gay men in New Zealand yet. The dancer Douglas Wright talks of it in his memoir Ghost Dances. Fiona Clark’s work Living with AIDS from 1988 shows us what it was like back then in the worst days. I look at her photos and they remind me.

The American writer Patrick Moore in his work Beyond Shame has a list at the back of the book, over 20 pages long with double columns, of the names of people who died who were prominent in the New York art scene. That’s just the arts. And while the numbers are less here the effect was the same. So many gay men who were growing and about to reach their maturity and height as artists, or potential political and community leaders, died. Gone.

Just as we were on the cusp of creating a new world, and a new open, powerful and celebratory culture for gay men, so many of us were wiped out.

And so many “ordinary” gay men died here too, men who just wanted to live and to love and be loved without fear.

It is also impossible to think of that time without remembering the incredible support that arose within our community and supported us, soothed us, visited us while we were sick, and watched us as we died. This violent eruption in the middle of our progress brought out much that was noble, good, and kind, and often from unexpected places and people.

Community groups organised themselves to feed us, to do our laundry, to support us, and to be there when we died. One friend of mine still has his “funeral suit” hanging in his cupboard. He can’t fit it now, but estimates he put it on at least once a month during the worst times. Lesbians who were basically untouched by the plague stepped up in amazing ways to help us. When biological families rejected us, our chosen and adopted families stepped in.

There were horror stories of men dying without a will, and families they hadn’t spoken to in years sweeping in and cleaning out the flat they had shared with their partner, leaving them nothing. Funerals were held but at times partners and friends were told to stay away so as not to embarrass the family. Even in death, we were something to be ashamed of. Maybe that is why the fight for marriage equality became so important for so many gay men. We had seen what can happen without any legal protection.

And me? I am one of the lucky ones. I was incredibly sick, sicker than I knew a person could get, unable to even get out of my bed to shit as I lay in the hospice at Herne Bay House. Unable to walk the few metres down the corridor to the dining room, tethered to an oxygen tank in my room.

But then the new drugs arrived. The first effective treatment for HIV infection, and I was one of the first to get on them in Auckland. Initially I was taking 48 pills a day, some before eating, some just after eating, some two hours after food, and some to counteract the side-effects of all the medication, like fatigue and diarrhoea.

Now I take five pills after breakfast and four after dinner, and my physical health is fine. My doctors are sure that, so long as I take my meds, I will not die of AIDS now.

I didn’t survive because of virtue, or some extra effort on my part, prayer, or positive thinking. I survived due to blind luck. If those new drugs had been another six months coming I’m sure I wouldn’t have made it.

AIDS changed my life, and reshaped it, and it reshaped my community and culture as a gay man. I wish it hadn’t, but that’s futile. It happened.  Like a war, it destroyed lives, communities, and loves, and seems to be as distant to young gay men today as the Napoleonic Wars, and that does hurt. I hope they never have to go through what we did, but I’d like to them to remember and know more about it. I’d like them to imagine what it was like, and to understand what it meant for those of us who managed to live through it.

Michael Stevens has a long history of involvement with Aotearoa’s Rainbow communities going back to the 1970s. Diagnosed with HIV in the 80s while living in Turkey, he has been an AIDS activist and social commentator as well as working in the broader field of work supporting our communities. He wrote his Sociology MA on how gay men negotiate safer sex practices in the online world. He lives in Auckland with his fiancé and their dog.