The Dorian Society: An entrée into Wellington’s homosexual world

His album from the 1960s includes photographs taken at the Dorian Society’s annual fancy dress balls in the 1960s.

In this excerpt from Mates & Lovers, Chris Brickell explores the origins of the Dorian Society.

In 1962, a group of Wellingtonians decided the Tête-a-Tête coffee bar and the Royal Oak Hotel ought to be supplemented with a more exclusively queer venue, and the Dorian Society opened its clubrooms in Cornhill Steet the same year.[1]

The Dorian was inspired by the cosmopolitan coffee-house and club atmosphere of the Dutch organisation Cultuur en Ontspanningscentrum (CoC), established in 1946. Dutch immigrants brought news of the CoC’s successes, while the Dorian’s name alluded to the ancient Greek world.

The society set out to ‘promote a social life amongst its members, to promote mutual helpfulness, tolerance, and respect, and to afford amenities to its members for mental and moral improvement and rational recreation of every kind’.[2] This statement, too, reflected the CoC priorities. 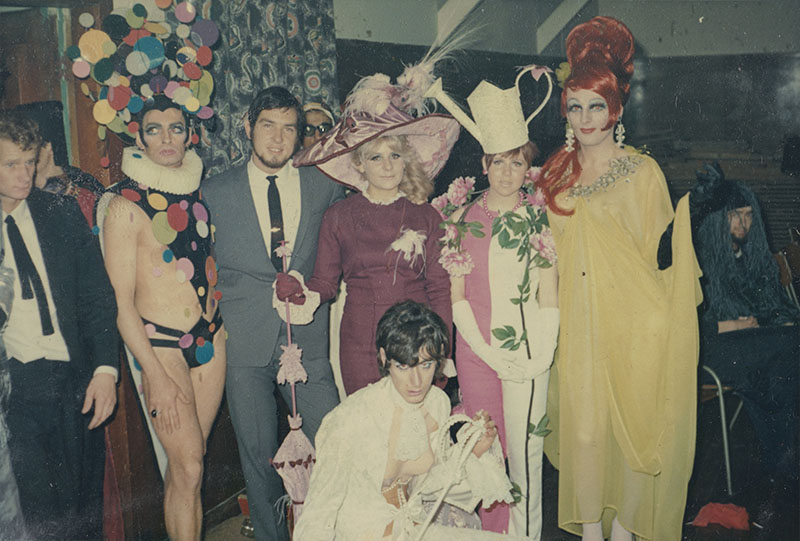 The Dorian had an important role to play in men’s lives. It provided one entrée into the homosexual world for those without extensive private friendship networks and, in turn, encouraged men to develop a sense of identity around their sexuality.[3]

Jack Goodwin, a senior Dorian member and later a key figure in the homosexual law reform movement, was rather more specific about the Dorian’s goals. In a letter to Monte Holcroft, the editor of the Listener, Goodwin explained that the society would help ‘homosexuals, particularly the young ones, to adjust themselves to society so that they are less of a risk to themselves or a scandal to others’. The organisation was ‘civilising’, he thought, and its role lay in creating good homosexual citizens.[4]

The Dorian’s officially stated goals suggest a rather sedate organisation. Some of its activities were quiet: on club nights during the 1960s members drank tea or coffee, listened to music, played chess, watched TV, and just enjoyed one another’s company. Several brought along their knitting, to the chagrin of those irritated by the clickety-clack of needles.

On Friday nights the members busied themselves with toast, biscuits, and soup, and the wine and cheese came out for the occasional poetry reading, film evening, or housie night. 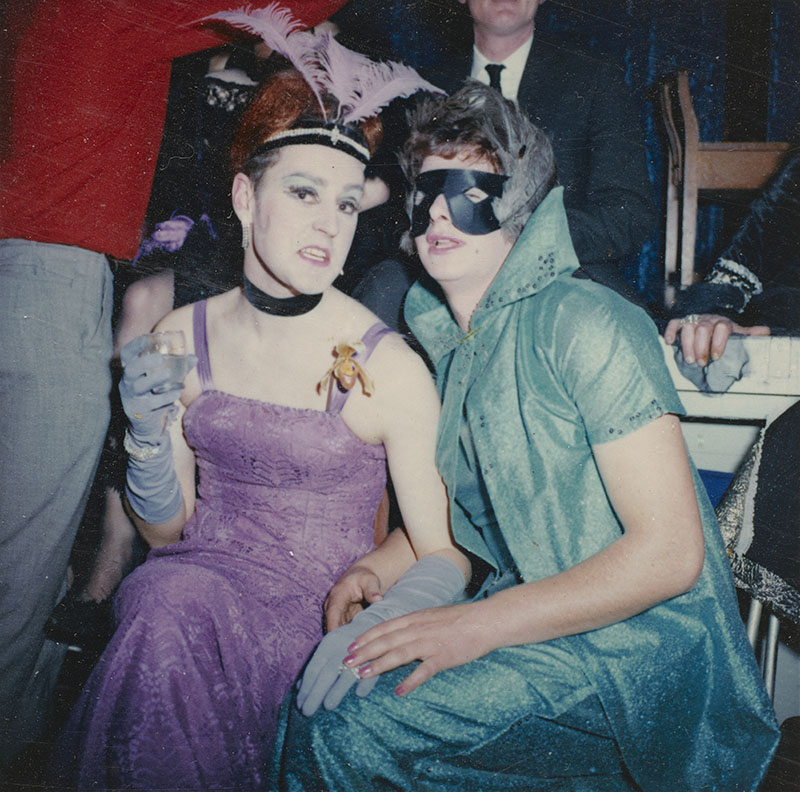 Bruce Sutherland, a Dorian member, recalls there was a certain level of decorum to be observed. ‘The first year we were running we had some visitors up there, and a visitor took his shirt off and was dancing around doing the twist or something to a 45 rpm record. The then-president was shocked at the display of naked skin and told him to put his shirt back on again.’[5]

One kindly constituent sent a note to the committee that read: ‘I have (like many others) gone to bed with John James and he isn’t really that bad. A rating is 8-and-a-half-to-9 out of 10’.[7]

The wine and cheese evenings stick in former members’ minds, but the Dorian’s committee organised rather more vigorous entertainments as well.

The events of Queen’s Birthday Weekend of 1965 were advertised on a plain cyclostyled flyer that promised ‘the gayest weekend in the history of New Zealand’. A fancy dress ball (‘bona bevies provided’) starred ‘the girls of the “Purple Onion”, NZ’s most fabulous and intriguing night spot’ performing their ‘French show’.

On the same weekend the Roxy Theatre was booked for a private showing of The Apartment starring Jack Lemmon. ‘Don’t delay; book your car, train, plane, boat, or broomstick now! You’ll have fun, so come!’ urged the organisers.[8] 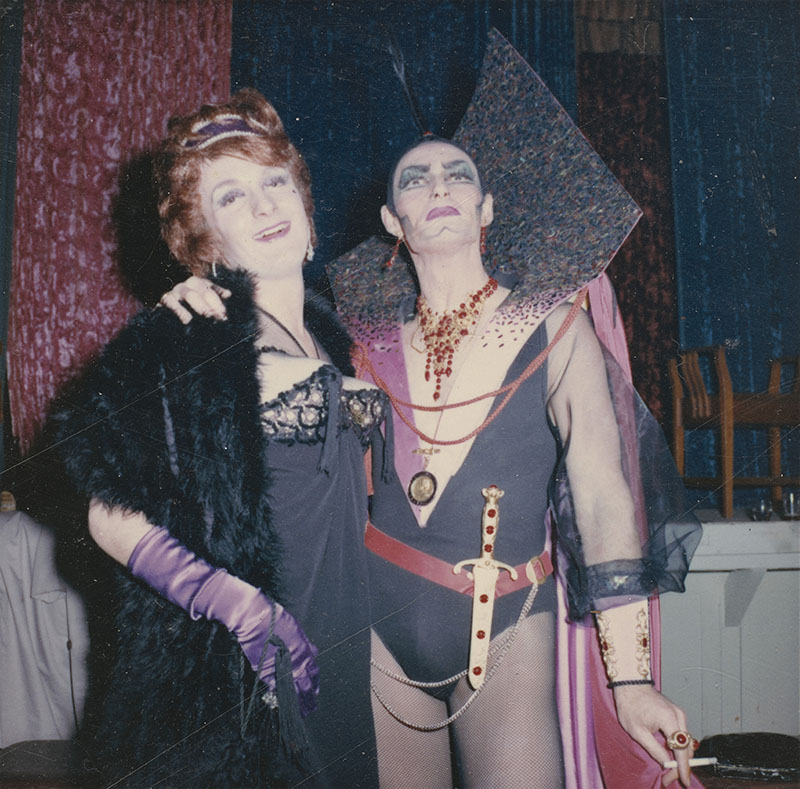 The media, still keenly interested in the urban subculture, heard about the Dorian’s Queen’s Birthday balls. A Truth reporter wrote about the 1967 event:

A lithe figure stalked by, looking like a cross between an Aztec Indian and a peacock. As he passed he whispered to a youth at my side: ‘What about slipping into drag, darling?’ and kissed him on the cheek. Two bearded types in gold jackets and pantaloons paused in their dance to kiss and embrace. No words can convey the scene in this twilight world.[9] 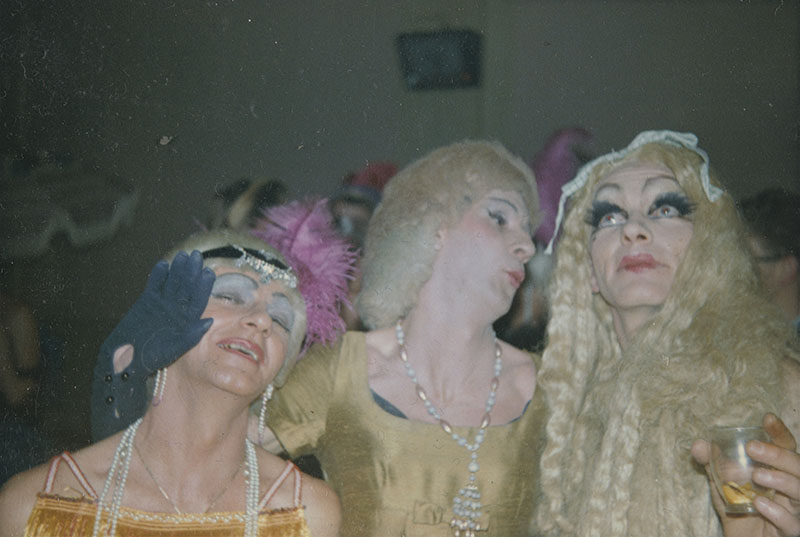 The reporter was recognised, and chased from the hall by some of the party-goers wielding bottles.

Many men remembered the Dorian fondly. The organisation attracted a wide cross-section of homosexual society, in terms of both age and socio-economic background. ‘It was an extremely invigorating mix because of that mixture of ages and background’, one member remembers: ‘all sorts of amazing people passed through that community’.[10]

As the 1960s wore on and gave way to the 1970s, the Dorian Society moved into bigger premises and added some innovations to its coffee-house atmosphere.

While its committee reminded constituents that the Dorian was not so much a social venue as a means of ‘upgrading the lifestyle and happiness of our members’, new winds were blowing.[11] ‘Disco-style dancing’, the committee conceded, ‘is likely to have a wide appeal, particularly to young members’.[12]

Sure enough, the new outlook worked, and a more ‘laid back’ approach ‘mixed with the more energetic disco type music’ encouraged members to socialise more.[13] The wine and cheese days gave way to something more alcoholic. As Bruce Henry said of the Dorian during the 70s, ‘It was a drinks place, and there was a great deal of noise and smoke and blokes dancing together’.[14]

The Dorian’s men still enjoyed their opera afternoons and theme nights too, and hippy evenings joined the old favourites of Greek, Roman, and Arabian.[15] 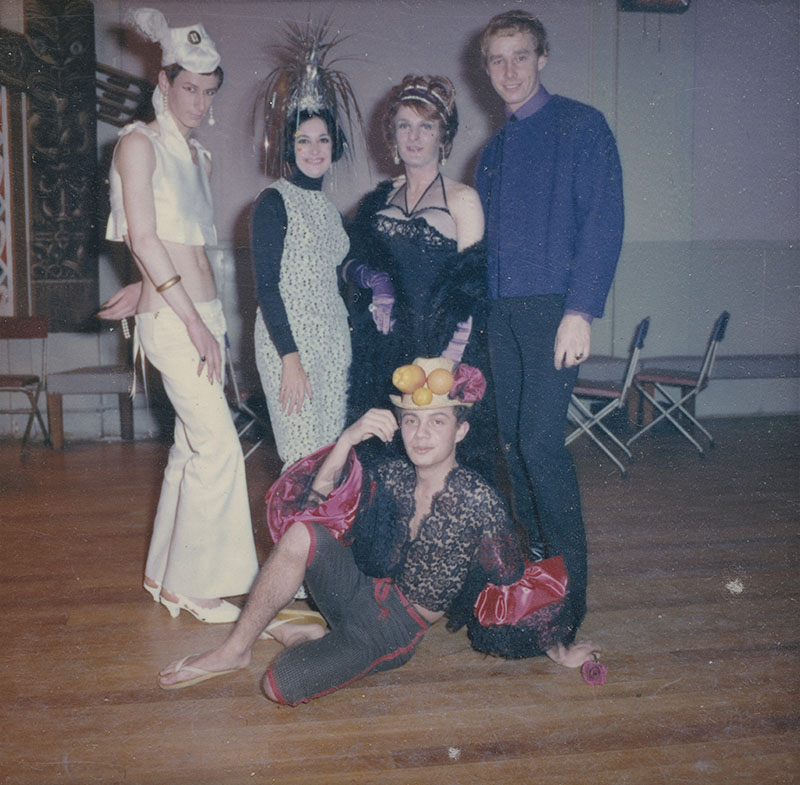