Queering the Planet: life before the Human Rights Act

Neil and Michael were members of the Wellington activist group Queer Planet. The group was inspired by the American group Queer Nation, which in 1990 became renowned for their in-your-face, media-oriented actions, including same sex kiss-ins in shopping malls. Queer Nation popularised the slogan “We’re Here. We’re Queer. Get Used to It.”

Neil Anderson recalls his time as a queer activist before the Human Rights Act of 1993, the passing of which made it illegal to discriminate against people on the basis of their sexual orientation.

It’s 1993 on a calm winter’s night at the Lion Tavern on the corner of Molesworth St and Pipitea St, in New Zealand’s capital city, Wellington. It’s a brutal two-storey concrete edifice, a 1970s beer barn.

The weekly karaoke evening is turning out to be a bit different. Wellington activist group Queer Planet have planned an action – a less trad-dad karaoke event than usual. 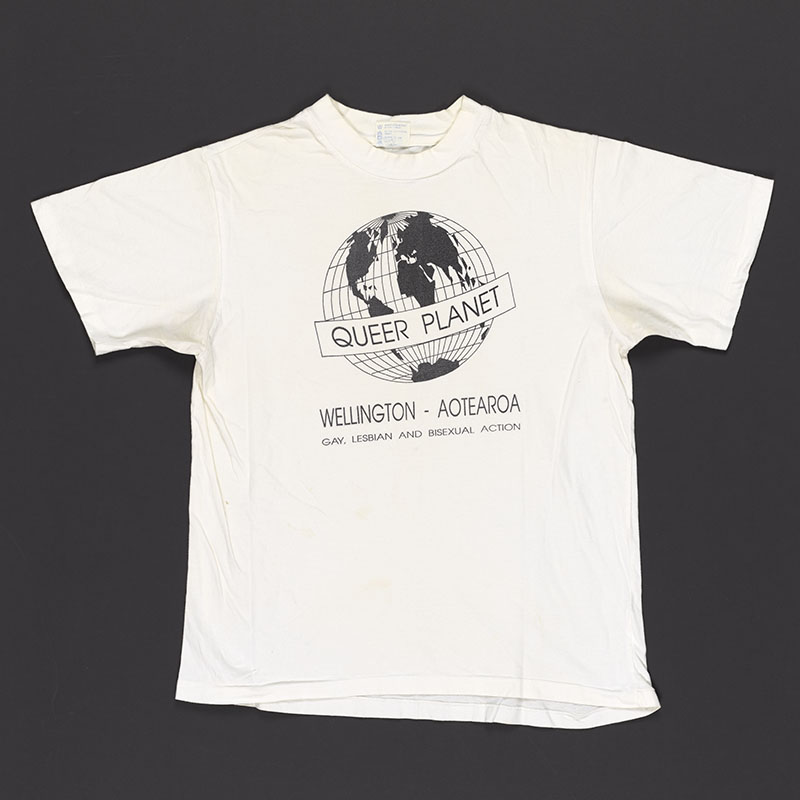 ‘My partner and I were active in an early 90s Wellington queer activist group Queer Planet.

‘The group was inspired by Queer Nation groups that sprung up across the USA in 1990. We joined an unforgettable Queer Nation meeting in San Francisco’s Mission district at that time. Their goal was the elimination of homophobia and increased visibility.

‘And on our return to New Zealand we had the same feelings about here. Gay men were no longer illegal, but queer folk had no human rights protections, and no legal recognition of our relationships. And on a day-to-day basis there was hardly any same sex affection in public. I vividly remember a gay friend saying how amazed [he was] that my partner and I would walk arm in arm along Oriental Bay.

‘So, it wasn’t just the wider world that was a problem for us living our lives to the full – it was also self-oppression.

‘Wellington’s Queer Planet group flourished with a series of direct actions, from rainbow flag making workshops in Aro Valley, to pasting up the latest Gran Fury graphics from the USA, through to our own queer nights out.’

Queer Planeters are mostly in their 20s and 30s – a lively bunch of workers and artists, all of us heading away ‘from the binary’... even if we didn’t fully know it at the time. We all knew that all clothing is drag, in essence – all humans are drag queens – it’s just that some of us know it better than others. And we reflected this view on the karaoke night – some of us staunch in Queer Planet T-shirts, others in gender-fuck get-up.

Up on the temporary stage, through the mist of smoke, Ron Te Kawa and Niki Mortimer belt out their karaoke cover of Ebony and Ivory. Most of the crowd roars with approval, yelling ‘more, more, more!’

And, for some reason, my partner Michael Eyes and I, decide that we too should grab our 15 seconds of fame. Requesting Stand By Your Man, our truly out-of-tune rendition of Tammy Wynette’s classic also seems to send the crowd wild. Throngs of Queer Planeters are whistling and clapping. Little known to us on stage – apparently a couple of the local regulars were saying, ‘What are they doing – I am going to fucking kill them.’ And then they realised they were surrounded by Queer Planeters.

Two months later the Human Rights Act 1993 is passed in parliament. Finally we have legal protection against discrimination due to sexual orientation. One big part of our work is done.

Step back in time 12 years and walk back down Molesworth Street two blocks.

It’s the evening of Wednesday 29 July in 1981 and I’m part of a crowd of anti-Springbok tour protestors. We march against a rugby tour that puts sport above the horrors of apartheid, a system that sees a racially selected national sports team from South Africa tour our country. The recent Hamilton Springbok rugby game had been halted by protest. At this early part of the Springbok tour we are not wearing helmets and body armour, and the police are just carrying short batons.

But tonight, everything in our country is going to change.

Marching out of parliament, 2,000 protestors walk up lower Molesworth St. We are heading up the road to demonstrate peacefully outside the South African consulate.

After only a short distance those of us back from the front of the march are suddenly pressed to stop. The police line has surged forward – they are drawing batons and smashing them down onto the protestors. The street echoes with so many thumps of wood onto bone, people screaming, and drunk patrons of the Wellington Hotel yelling abuse. 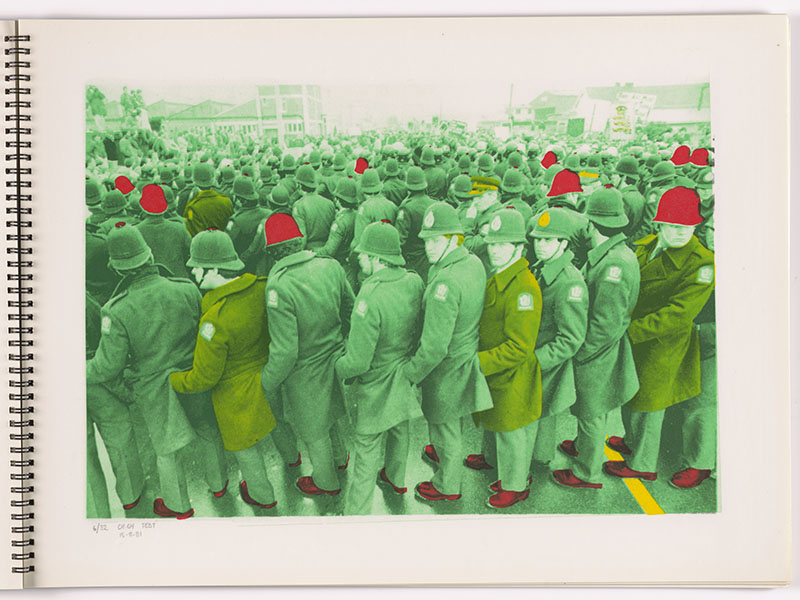 Within a flash, I put up my right arm to defend myself and a baton thuds onto my elbow cutting it open, and blood flows quickly. But the woman next to me is in a much worse state – she is batoned on her head, and collapses to the ground. Her head and face is covered in blood, she is barely conscious. We drag her over to the pavement outside the pub, while the batoning, screaming, and chanting continues.

Three hours later I get off the bus home to Eastbourne, having covered my bloody arm. I walk into the lounge. Mum and Dad are watching the UK’s Royal Wedding of Prince Charles and Lady Di – apparently the ‘wedding of the century.’ What can you say? It is time to tell truth. I pull back my sleeve…

1981 – the year of the Springbok tour – was the year that I came out, to myself. I joined the Victoria University gay social club, and the main gay and lesbian activist group on campus.

Sex between men was illegal, we had no human rights protection. In large parts of New Zealand queer folk of all types faced intense prejudice. But, despite all of this, we weren’t prepared to stay in the closet. I realised, and so many others did at the time, that when you come out against society’s pressures it’s a chance to think about, and question, absolutely everything.

As it turned out, the national furor caused by the Springbok tour spurred us on to address the extreme apartheid applied against us here in New Zealand – at a political and at a social level.

So, we come to the collection of activist T-shirts and singlets. These were worn in New Zealand in the period between the 1981 Springbok tour, and that fateful karaoke night in 1993, just before the Human Rights Act 1993 was passed. Let’s call this the in-between.

For us, the end of the Muldoon government in 1984 ushered in an age of possibility. Who can forget the election night when David Lange won? I vividly remember a crowd of us cracking some seriously bad moves to New Order’s Blue Monday at Clare’s Nightclub off Cuba St. The possibility of change made us ecstatic.

This was also a time before the internet became the dominant communication system, and well before the rise of 21st century social media. In the 1980s and early 90s, broadcast television and radio, and newspapers... these really mattered.

So, if you wanted to make change – and you didn’t have a giant marketing budget – how could you make your voice heard in other ways?

The graphic safe sex street poster, pasted up in the dead-of-night throughout the Wellington CBD.

Squeezing into a queer themed T-Shirt for human rights rallies in the early 1990s.

Mix and match your clothes so that you end up in Adam Ant floral pirate pants in a Berhampore biker hangout – and live to tell the tale.

Relentless writing groups for letters to the editor for major newspapers – throughout all the big campaigns.

And on it went.

These T-shirts exist from this time – when communicating your argument was often graphic, personal, and physical. These actions were often small bites within a big broadcast media environment.

As well as being a donor to Te Papa’s collection, Neil Anderson is also a museum professional. He has worked in the cultural sector for over three decades. He began his career as a trainee at the Dowse Art Museum, and went on to work at the National Art Gallery and the Museum of New Zealand Te Papa Tongarewa project office. Since leaving Te Papa he has consulted on a range of cultural projects across Australia, China, and New Zealand focusing on relevancy and engagement within the cultural sector.