The Scots in New Zealand

Think 'Scots in New Zealand', and your thoughts will probably turn to tartan, bagpipes, and 'Auld Lang Syne'. But look beyond these and you'll find a Scottish presence everywhere in New Zealand life.

The first Scots to set foot in New Zealand were crew on explorer James Cook’s ship Endeavour in 1769. Over the next 200 years, they were followed by thousands more, setting out for a new homeland on the other side of the world.

These migrants brought with them trades and skills, ideas and beliefs, and, above all, a desire for a better life. They established communities that were strongly Scottish in character, and eventually settled right across the country.

This part of the exhibition tells – through the migrants' own stories and the treasures they brought with them – the rich history of Scots settlement. 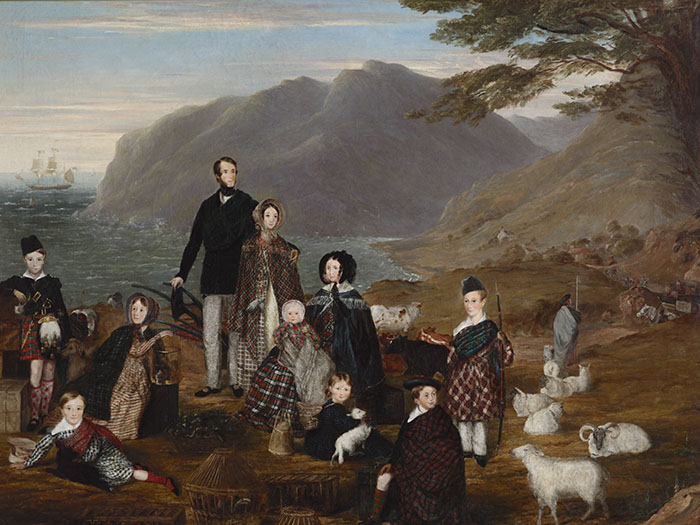 New Zealand offered Scots migrants the opportunity for a better life – and the chance to shape a new society.

The Scots, like all migrants, were a mixed bunch. But certain values marked them out as a group: a belief in education and equal opportunity for all, and a sense of personal and social responsibility.

Armed with these values, the Scots set about establishing in their new country the educational and scientific institutions that they had valued in the old. They focused their work ethic and commercial skills on the task of building profitable businesses and a solid infrastructure for the fast-developing country.

The Scots were also energetic players in the major debates of the times, including the debate about alcohol. They were on both sides of the argument, some vigorously against alcohol, others manufacturing it – legally or illegally.

In fact, the Scottish influence has been so pervasive that many Scottish customs and attitudes have become part of New Zealand life.

For millions of Scots scattered worldwide, Scotland remains the homeland. It's the place they look towards for inspiration, with affection, or with an air ticket to renew that sense of Scottish identity.

Listen to a series of podcasts about Scottish settlers:

Sean Brosnahan discusses the Scottish roots of their collection and early settler John Buchanan (1804?-80) and his warm and welcoming family.

Sean Brosnahan talks about the story behind the Highland chief, Alexander Ranaldson MacDonell, 17th Chief of Glengarry (1834-62), the last of his line, who is buried in Dunedin’s southern cemetery.

Curling, the Roaring Game: Keeping it on Ice

Stewart McKnight (past President of the NZ Curling Association) and others take part in a curling demonstration at the frozen Naseby dam, Central Otago, August 2006. McKnight discusses the traditions of the game and talks us through a casual match.