The Imperial German flag: a symbol of colonisation of the body and gender

Land and resources are not the only things that can be colonised: the body and gender also suffer from its pernicious effects, as Pounamu Jade Aikman reflects on in this personal essay. 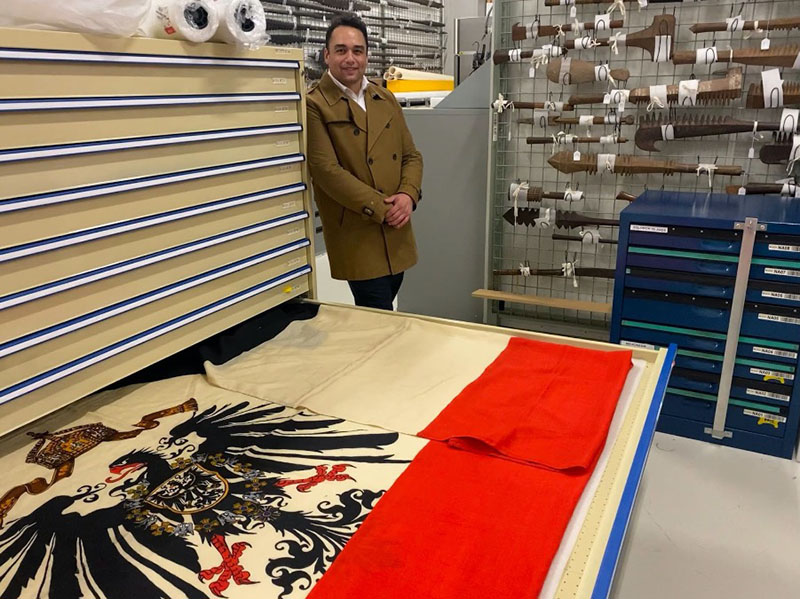 ‘Saw a flag, and felt colonised.’ My first thought upon seeing an Imperial German flag, captured by New Zealand soldiers in Sāmoa after the capitulation of the Second Reich during the First World War. But it wasn’t the usurpation of lands or armed invasions that I saw. I saw the violent imposition of fiercely patriarchal hypermasculinities onto Pacific bodies, forcibly displacing the diverse and varied forms of sexuality already in existence here. And even in the long wake of Germany’s departure from the region, these colonial currents continue to shape norms of sexuality today. Let me unpack what I mean.

In 2018, I taught a comparative Polynesian histories paper in Pacific Studies, at Victoria University of Wellington. Early in the trimester, we were privileged to be taken on a back-of-house tour in the Pacific collections at Te Papa. For anyone fortunate enough to have taken such a tour, thousands of items from across the breadth of Te Moana-nui-ā-Kiwa are carefully stored in the museum’s dedicated, temperature-controlled collection store. It is an imposing room, tailor designed to accommodate the invariably diverse shapes, sizes, and materials of the items and objects. Large steel girders carry the weight of ancestral tapa and cloth, while wide reinforced drawers lay guardian over innumerable other taonga. The walls are adorned with ceremonial spears and weapons, each resting in patient silence.

Our guides, Sean and Grace, give context to some of the items. As we journey on the tour, we arrive at a large set of steel drawers. After students correctly identify one of the items as an ‘ie toga, Sean opens a drawer beneath to reveal a large, aged canvas flag. At a distance, the pennant is a striking tripartite of black, white, and red. Closer in, a profile image of a postured eagle is emblazoned in the centre, its outstretched wings and long, sharply articulated black feathers commanding the viewer to attention. The otherwise charcoal bird is punctuated by a crimson beak and talons, a suspended, voiceless cry emanating from its protruding mouth. An ornate, gilded crown hovers above the eagle, its brow clustered with glittering gemstones. Gold-leaved banners flutter beneath the diadem in a windless breeze. A royal breastplate decorates the eagle’s chest, its body wreathed with a chain of gold and grey pendants.

‘Who can tell us what this is?’ asks Sean. ‘That is an Imperial German flag’ responds another of my students with confident immediacy, ‘I’ve taken this tour before.’ He laughs at Sean’s impressed expression. And that it was: the Second Reich’s Foreign Office State Flag, taken following the withdrawal of Germany from Sāmoa in 1914. And yet as I gazed upon the flag, the arresting imagery and bold colouring emphasised to me the far-reaching impact of colonisation upon the bodies of Pacific peoples. Because colonisation wasn’t just about the dispossession of lands and resources, but the displacement of a whole way of understanding ourselves, and the worlds around us. And that takes hold deep in the essence of who we are, and how we know our bodies. Just as a hundred years had done little to fade the block red and black of the flag, the binary configurations of gender introduced during colonisation – either male or female, and nothing in between – have relentlessly endured in the Pacific.

The eagle, rigidly posed, has long been used as a symbol of solitary, masculine strength. As a bird flying above the reach of any other, its proximity to the heavens amplifies this perceived vitality. Soaring alone, it idealises the distanced expression of affection. Even the mere act of erecting flags is masculinised: claiming something that was not yours, by your own divine right. And so when I looked at the flag, I saw the valorisation of hypermasculinity and patriarchy. I saw the ‘hard Southern man’ archetype, the ultra-suppression of emotion, that settler colonial societies have long celebrated and preserved. I saw the binary of gender introduced during colonisation, in place of the spectrum of Pacific sexualities that do not (and arguably, haven’t ever) subscribe to this ‘either-or’ mentality. And I saw the heteronormativity that has emerged as the norm throughout the settler colonial world, in place of this diversity.

Of course, the Imperial Flag didn’t do this in and of itself. But as a quintessential symbol of dominion and empire, flags are tangible expressions of colonial expansion. Colonisation sought to unravel the myriad ways of being and knowing in the Pacific, and reconstitute them in its own colonial image. This reshaping is not only manifest in the roads built indifferently upon ancestral landscapes, or the resources violently extracted by colonial administrations. It is in the essence of who we are, our bodies, and our sexualities.