Giving artworks a title in te reo Māori positions that work within a Māori worldview.

It locates te ao Māori at the centre and gives precedence to an audience who understands te reo Māori. Knowing that an artwork might have been made from within this site of tino rangatiratanga is empowering and reassuring. Don’t get me wrong though, you can’t just chuck a Māori word you saw on a street sign at an artwork and expect it to make sense. Just like you can’t use Google Translate (well, some can…) or pick a bunch of random words from Māori Dictionary because this may end up hurting the “Māori ear” – or eye.

The following artworks and artists employ te reo Māori in different ways, providing a layered access into appreciating their work.

Kit-Set Whanaungatanga by Maureen Lander is exhibited as part of Maureen’s show Flat-Pack Whakapapa at The Dowse Art Museum, Lower Hutt. Using both English and te reo Māori, the title has a nice ring to it and rolls off the tongue.

A good friend once told me that whanaungatanga is a powerful beast, he described whanaungatanga as being the act of attaining and maintaining relationships. The nature of how this is enacted is a game-changer for, well, the change we want to see.

Trust, accountability, and the inevitable obligation keeps us in check with our communities. Maureen’s work references a “do it yourself” but not just for yourself approach to making and maintaining relationships.

Maureen established a collaborative method for Kit-Set Whanaungatanga by recruiting her “A-Team” (A stands for Āwhina) to produce the work alongside her, highlighting the relationships made through mutual interests.

Kit-Set Whanaungatanga is a series of harakeke formations that are joined together to create a commanding work that is seven metres in length. Although the composite pieces employ similar production techniques, they resist uniformity. The A-Team were encouraged to create individual works whilst staying within specific parameters. Kit-Set Whanaungatanga acknowledges the significance of relationships beyond kinship and is a playful insight into making and creating with friends. 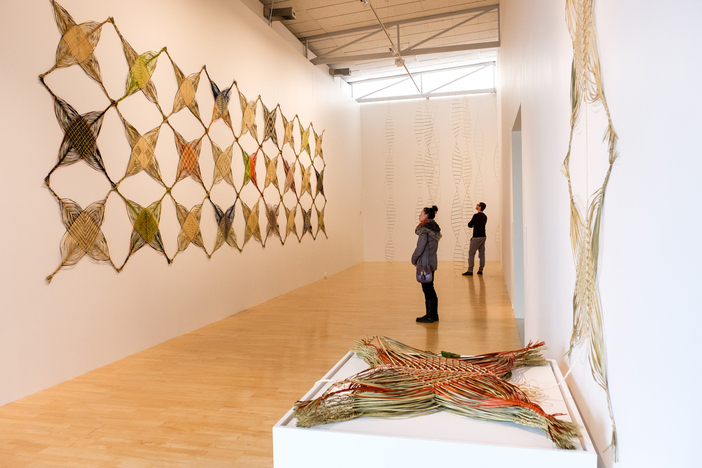 Pākati Kārearea by Kereama Taepa is part of Kereama’s show Whakapī at Pātaka Art + Museum, Porirua. Pākati and haehae are often seen around the mouths and brows of wheku, or carved representation of human faces. The kārearea is the New Zealand falcon, a bird of prey that you might have seen swopping down from the sky as you drive along a country road.

Kereama has positioned identifiable arcade symbols on his 3D-printed wheku, including the Star Wars Millennium Falcon which is seen in an alternating pattern with the Death Star, and so you get Pākati Kārearea. This 3D-printed wheku highlights the innovation of Māori art, which has consistently adopted new techniques and technologies with deft execution. By utilising identifiable cultural markers and printing the wheku into existence, Kereama locates Māori art as current and accessible, with a light touch of humour.

Ko ahau te wai, ko te wai ko ahau is a twist on the well-known saying from Whanganui, but no less a whakataukī in its own right. An artist that works predominantly in jewellery, Neke Moa’s work is part of Handshake 3: Reflect on at The Dowse. Handshake is a programme that partners selected emerging artists with a mentor of their choice, aiding the development of ideas and work. It recognises and provides an avenue for much needed ongoing support outside of a learning institution.

Neke’s works consists of pounamu droplets suspended on varied lengths of black chord, they descend towards a bowl made of onewa that was sourced from Te Awa Kairangi, the Hutt River. The section of Te Awa Kairangi that flows through Lower Hutt is, like many New Zealand rivers, not clean. As in, there are signs warning dogs not to swim. It’s that kind of not clean.

A far cry from the life-giving, food-gathering, and clean water source it would have been when Wi Tako Ngatata was building Nuku Tewhatewha, the pātaka carved in support of the establishment of the Kingitanga which is housed at The Dowse. Herein lies the dilemma Neke is presenting to us by raising awareness around the state of our waterways, asking if ‘we are the water, and the water is us’, what then?

Kaiwhakatere: The Navigator is the overall name given to Brett Graham’s three sculptures that swell up from lush green grass near the Beehive. Commissioned by the Wellington Sculpture Trust, they serve as a daily reminder to those in Parliament that it’s the navigator’s job to not only know where we’re going but how to get there.

Manu, Waka and Tuahu are the names given to the three formations of stacked granite blocks, they reference the tools needed for navigation. Throughout ocean voyaging manu signify different weather patterns or proximity to land, they are used to gauge where you’re at and how far you’ve got to go. Waka, in its broadest metaphorical sense, symbolises the journey. Lastly, tuahu, can represent the end destination or goal.

Pulling all of these components together, Kaiwhakatere: The Navigator makes reference to strong leadership qualities. To be the navigator is a responsibility not taken lightly as they are the way finder and farsighted innovator whose vision verges on prophetic. Our current and future leaders must be insightful, knowledgeable and able to have the foresight to lead us into the future.

Art work titles in te reo Māori provide another layer of meaning and understanding. From bilingual use to humorous translations and time-worn sayings, te reo Māori titles afford audiences an ‘in’ to the meanings in the work. He toi whakairo, he mana tangata.