Bugs that work together really make an impact. Complex societies form efficient colonies, and migrating bugs gather in clouds that darken the skies.

A wandering swarm of honeybees has one aim – to start a new hive. The old hive loses its queen and half its workers to make this swarm. So how does it recover?

Before the queen leaves, she lays eggs in special cups. One of these will grow into a queen and become the colony’s only egg layer – by killing any other young queens!

Honeybee workers use dance to tell their sisters about new food sites. The better the source, the more enthusiastic the dance.

If another bee knows her source is better, she might head-butt her sister to stop her wasting everyone’s time. It seems rude, but it helps the hive to thrive. 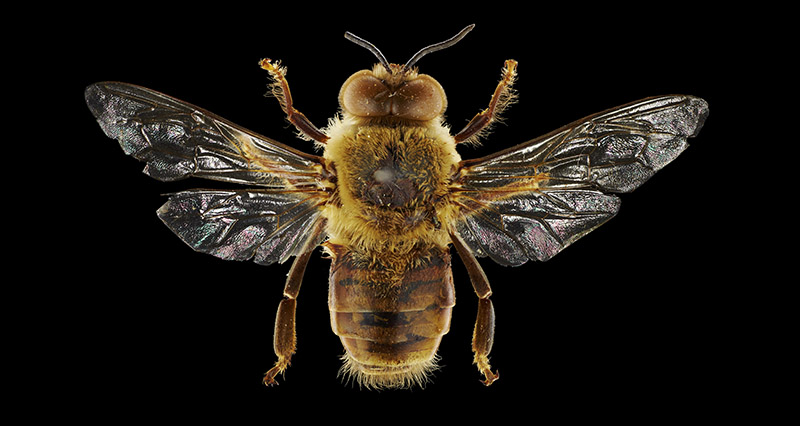 German wasp nests usually die off each winter, but some have hitched a ride with you humans to milder climates.
When nests survive the winter, they grow huge. Colonies produce multiple queens, who produce even more wasps. And with no natural predators, they really boom – bad news for other insects who compete for food or get eaten!

Many social wasps, bees, and ants have a worker class. These workers have many roles, and they switch as they grow.

Young workers stay safe inside, caring for eggs and larvae. Older workers do riskier jobs, such as foraging outside where they might be eaten. This way, the old protect the young.

The size of a locust swarm varies, from thousands to trillions. Clouds of them can block out the sun, rain down like hail, and devastate crops over areas as big as continents.

But most of the time, locusts are solitary. When drought follows a period of plenty, they become overcrowded and can suddenly form a fast-moving, hungry swarm.

Most migrating bugs travel between north and south to avoid cold or drought. But dark blue tiger butterflies head east to escape the monsoon rains in south-west India.

Large swarms fly hundreds of miles one-way. When they get to their destination, they breed – it’s up to their offspring to make the return journey  west.

Cockroach groups aren’t structured, and they don’t have a queen. Instead, families join together to form herds. They share shelter, food, and decision-making.

When one cockroach is attacked, it emits an alarm pheromone that tells the herd, ‘Danger! Scatter now!’

We’d forgive you if you thought the American cockroach can run through walls. It sprints through tiny crevices with ease, squeezing its body to one-fifth of its height, and splaying its legs to the sides.

It’s fast, flexible, and almost unsquishable – it can survive crushing blows up to 900 times its own body weight.

When the queen Asian paper wasp starts a nest, she has to be ruthless.

Asian paper wasps make paper by chewing wood. They mould those uniform six-sided nest chambers with their jaws – without a tape measure in sight!

Bull ant workers kill insects to feed their colony’s larvae. Most other ant species lay chemical trails to lead each other to good food sources – but bull ants hunt alone.

People usually avoid bull ants because their stings are painful. But in a pinch, you’ve sometimes used their large jaws to keep wounds closed.

It might be smarter to carry a first aid kit though – stitching with ant jaws isn’t neat, hygienic, or much fun for the ant!

Swarms of painted lady butterflies can be big enough to darken the sky. They migrate over multiple generations, using different flight paths: Africa to Europe, Central to North America, and across parts of Asia.

Each butterfly can travel up to 1600 km/995 miles, and breed year-round. No wonder they’re the most widespread butterfly in the world!