How did Te Papa survive the Kaikoura earthquake nearly unscathed?

Imagine you’re enjoying the world’s smoothest car ride. Hit a bump and you barely notice, thanks to state-of-the-art shock absorbers. Te Papa is similarly protected from earthquakes by a clever Kiwi invention – base isolators. These flexible bearings – 152 of them – sit between Te Papa and a concrete slab, moving and taking much of the impact when there’s an earthquake.

What base isolators do

The base isolators are made of a rubber-and-steel sandwich with a core of lead. The rubber gives flexibility, and the sheets of steel add strength. The lead core absorbs shock, and turns some of an earthquake’s energy into heat. Result? Instead of being jolted, Te Papa ‘rolls with the punches’, experiencing a longer, gentler motion. Around Te Papa’s base is a 400-millimetre seismic gap to allow for this movement. In the 7.8-magnitude Kaikoura earthquake, the building ‘slid’ about 15 to 20 millimetres.

You can see our base isolators in the Quake Braker exhibition. 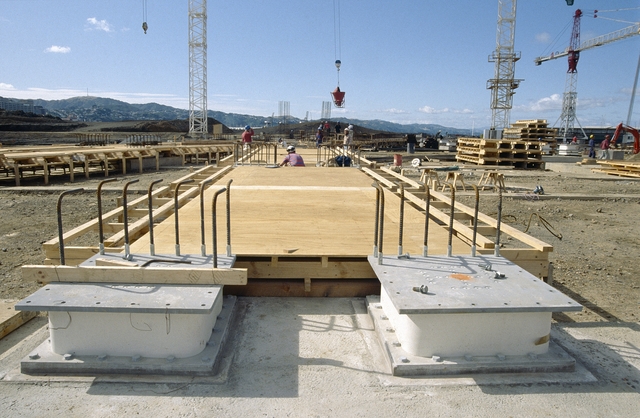 Te Papa is a six-storey, 50,000-tonne building. Yet when the impact of the Kaikoura earthquake hit on 14 November, damage was minimal. We care for more than two million objects, and the earthquake caused minor damage to only nine items – six on display and three in our store rooms.

Base isolators don’t make the building entirely earthquake proof. But they will protect Te Papa’s taongataonga treasures and people from even the biggest shake that could happen in Wellington:

Once-in-2,000-years quake (magnitude 11) – people and treasures safe, but building might need to be demolished

These base isolators are the invention of Kiwi scientist Dr William Robinson and his team. He hit on the idea of combining a lead core with layers of steel and rubber to get the right combination of strength, flexibility, and shock absorption. Now this local innovation is used for buildings and bridges in quake-prone areas around the world, from Japan to California.

How to stop that sinking feeling

The land Te Papa is built on was originally soft, reclaimed soil that could turn to liquid in a large earthquake. Also, it’s near a major fault line – not an ideal location! Ingenious engineers solved the problem by dropping 30–tonne weights on the site more than 50,000 times before building began. It rattled the nerves of neighbours, but after three months, the ground was stabilised.

Watch a video about how Te Papa was built to stay safe.