Before the All Blacks: The New Zealand ‘Natives’

The team had originally been known as ‘New Zealand Maori’, but after five Pakeha (non-Māori) men were selected, it was re-named to support the idea that all its members were ‘native-born’ New Zealanders – although two members had been born overseas. 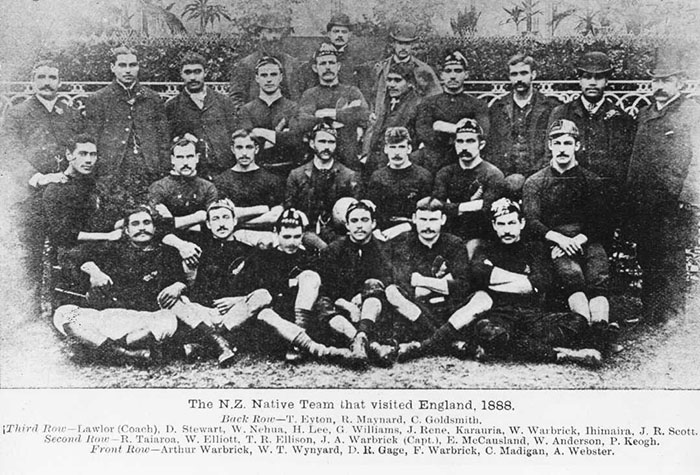 The team played its first match, against Hawke’s Bay at Napier, in June 1888. By the time they had returned to New Zealand in August 1889 they had played 107 matches, in New Zealand, Australia, and Great Britain. They won 78 of these matches.

The British tour had been organised by Joe Warbrick and Thomas Eyton. They were able to do this as a private business venture because a national organising body (the New Zealand Rugby Football Union) did not yet exist.

The organisers hoped to show British audiences, who had never encountered Māori previously, a team which ‘presented the appearance and character of true Maori’ and competed against their colonisers on equal terms.

These aspirations were supported by some of Britain’s ruling elite, who hoped the tour would show how a shared love of sport, ‘playing an English game against English players’, could remove tensions between colonised peoples and their colonisers.

The ‘Times’ newspaper of London expressed this hope in an editorial, which stated: ‘The colonising race that can imbue the aboriginal inhabitants of the colonised countries with a love of its national games, would seem to have solved the problem of social amalgamation in those countries.’

The Natives played their first game in Britain on 3 October 1888, when they defeated Surrey 4-1. Their performance of a pre-match haka, and the black jerseys they wore, aroused curiosity.

The team’s playing schedule (as well as the endless round of dinners and other entertainments) was impossibly hectic, leading to injuries and fatigue. No modern team would play so many games crowded into such a short time period.

There was also criticism of the Natives’ supposedly ‘over-vigorous’ play. These criticisms came from southern England, where gentlemen-amateurs played rugby for entertainment. When the Natives played against teams in the north of England, they were praised for their ‘fairness’. The difference was that working-class men in Yorkshire and Lancashire, like the Natives, played to win.

The legacy of the Natives tour, and the tour of a British team to New Zealand, also in 1888, showed that New Zealand men could compete at rugby on equal terms with representatives of their colonisers. The Natives, captained by a Māori – Thomas Rangiwahia Ellison – had at least in part realised the hopes expressed by British commentators at the start of the tour.

The Natives tour contributed to the formation of the New Zealand Rugby Football Union (NZRFU) in 1892. The following year saw the first officially sanctioned overseas tour by a New Zealand representative team, to Australia. Under the leadership of Ellison, New Zealand won nine of their ten games.

The first tour of Britain under NZRFU came in 1905, the ‘Originals’ playing 35 games and losing only one, to Wales. The term ‘All Blacks’ was first used during this tour.